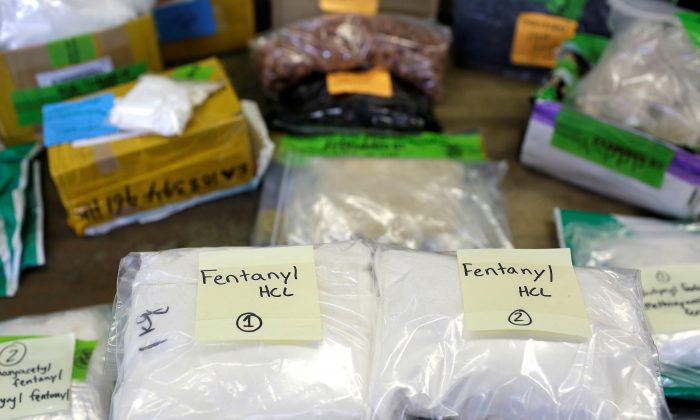 Plastic bags of Fentanyl are displayed on a table at the U.S. Customs and Border Protection area at the International Mail Facility at O'Hare International Airport in Chicago, Ill., on Nov. 29, 2017. (Joshua Lott/File Photo via Reuters)
US-China Relations

US Imposes Sanctions on Three Chinese Accused of Fentanyl Trafficking

The trio included a father and son indicted in Ohio last year on charges of producing and smuggling fentanyl and fentanyl-related substances. The third man was indicted on similar charges in Mississippi in 2017.

The trafficking operations the three allegedly run “are directly contributing to the crisis of opioid addiction, overdoses, and death in the United States,” Under Secretary of the Treasury Sigal Mandelker charged in a statement.

The United States had pressed China to arrest Fujing Zheng and his father, Guanghua Zheng, and Xiaobing Yan since their indictments. However, all three and five other Chinese citizens indicted in the United States for fentanyl trafficking have remained free, according to a U.S. Congressional Research Service report last December.

The United States is in the middle of a major trade war and other serious disputes with China, making it uncertain whether the Treasury Department action would have any impact on Beijing. Some experts believe any crackdown by Beijing will depend on meaningful progress toward resolving the trade war.

White House counselor Kellyanne Conway, tapped by Trump to oversee efforts to fight the opioid crisis, told reporters the administration would “continue to name and shame and prosecute and punish people who are peddling their poison into our kids and into our communities.”

The three men sanctioned on Wednesday were designated as foreign drug kingpins by the U.S. Treasury Department’s Office of Foreign Assets Control under a law that freezes any property they control in the United States and bars American citizens from doing business with those properties.

The three also face penalties ranging from civil fines of up to $1.1 million per violation to more serious criminal penalties, the Treasury Department said in a statement.

Fentanyl is a cheap, relatively easy-to-synthesize opioid painkiller 50 times more potent than heroin that has played a major role in the devastating U.S. opioid crisis. Fentanyl and all of its analogues are controlled substances subject to strict regulation in the United States.

More than 28,000 synthetic opioid-related overdose deaths, mostly from fentanyl-related substances, were recorded in 2017, according to the U.S. Centers for Disease Control and Prevention.

The Treasury Department action came three weeks after Trump accused Chinese leader Xi Jinping of failing to meet his promises to crack down on the deluge of fentanyl and fentanyl analogues flowing into the United States.

By Jonathan Landay and Lisa Lambert