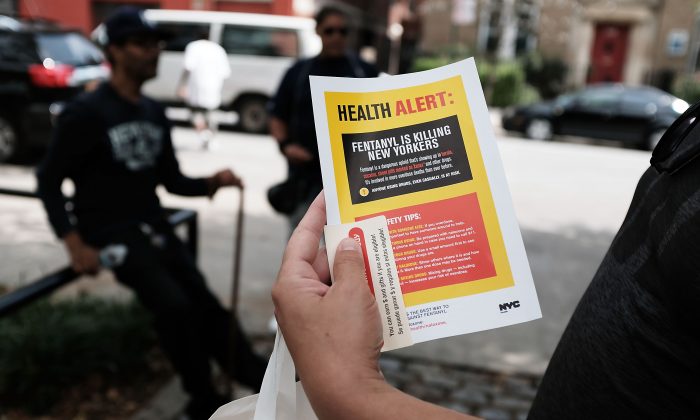 Fentanyl Flowing Into US Overwhelmingly Sourced From China

China’s “export-led economic strategy and lack of regulatory oversight” are responsible for most illicit and synthetic fentanyl in the United States, think tank Rand Corporation recently testified to Congress.

The global policy think tank told the U.S. House Homeland Security Committee that the rising opioid epidemic was initially fueled by an oversupply of prescription oxycodone and hydrocodone, but by 2019 morphed into an illicit synthetic opioid crisis causing “approximately two-thirds of all opioid overdose deaths.”

Pharmaceutically-pure fentanyl is an opioid that is 80-100 times stronger than morphine. The compound was approved in 1968 as a transdermal skin patch for pain management treatment of very sick cancer patients undergoing chemotherapy or hospice.

U.S. Customs and Border Protection (CBP) Enforcement Statistics reveal that fiscal year seizures of illicit fentanyl spiked from about one kilogram in 2013 to nearly 1,000 kilograms in 2018. With several U.S. regions transitioning away from heroin to synthetic opioids, the number of law enforcement fentanyl seizures within the United States vaulted from about 1,000 in 2013 to more than 59,000 in 2017.

Mexico drug cartels for decades have dominated traditional street-sourced opioids, such as heroin and diverted prescription painkillers. Law enforcement through 2004 would occasionally shut down a few American chemists’ small-scale production of illicit opioid powders. But the Mexican cartels in the mid-2000s started manufacturing about 7.5 percent pure fentanyl to enhance the potency of their heroin street sales in the United States.

Canadian and U.S. law enforcement reported that since 2013, “most synthetic opioids and precursors originate not from a single clandestine source, but from what could be many semi-legitimate manufacturers and vendors, most of whom are in China.”

The DEA reported that cartel drug labs in Mexico have a long history of importing the precursors to brew illicit methamphetamine from China. But over the last five years, semi-legitimate pharmaceutical suppliers have focused on shipping 90-percent pure fentanyl to the U.S. drug traffickers “via the international postal system and private express consignment carriers, such as FedEx and DHL, as well as by cargo.”

Rand states that China’s expansion of e-commerce and inexpensive shipping have made global trade cheaper and more convenient explains why China’s pharmaceutical industry is now the second largest in the world with 5,000 manufacturers producing more than 2,000 products. With annual production capacity of over 2 million tons, China is also “the single largest exporter of active pharmaceutical ingredients in the world.”

Combined with another 400,000 chemical manufacturers and distributors, some operating without legal approval, Rand states that China’s market reforms have far outpaced regulatory oversight of its pharmaceutical and chemical industries.

Rand warns that the scale of smuggling synthetic opioids from China may be evolving, as evidenced by the June 2018 seizure in Philadelphia of “50 kilograms of 4-fluoroisobutyryl fentanyl hidden in barrels of iron oxide in an air shipment from China.”

According to DEA, the lack of international control under the UN system of drug conventions has allowed Chinese manufacturers to export fentanyl precursors. In late 2016, the U.S. Department of State identified nearly 260 opioid producers with more than half located in China. Although the fentanyl precursor chemicals were finally added to China’s national drug schedules in early 2018, Chinese producers face little domestic scrutiny regarding restricted drug production and export.

After the U.S. Centers for Disease Control and Prevention reported 28,000 opioid deaths in 2017, mostly from fentanyl, U.S. President Trump and China leader Xi Jinping negotiated a December 2018 agreement during G-20 summit in Argentina that “China would enact policies to penalize the manufacturing and exporting of fentanyl.”

The regime had pledged from May 1 to include fentanyl analogues—drugs with a slightly different chemical makeup but are addictive and potentially deadly—in its list of narcotics subject to state control. But many U.S. lawmakers, officials and experts have been skeptical of Beijing’s willingness and ability to these changes.

Dissatisfied with the progress of trade talks, Trump on Aug. 1 announced the imposition of new tariffs on $300 billion of Chinese goods, blaming the regime for failing to make good on its pledge to buy more US farm goods and curb the flow of fentanyl.

China’s state-run media responded to the move saying the fentanyl crisis was a problem for which “the United States only had itself to blame.”

Liu Yaojin, deputy director of the China National Narcotics Control Commission, in an Aug. 3 interview with China’s broadcaster CCTV, reiterated this position, saying: “China is not the main resources of fentanyl in the United States … I think that the United States should solve the problem of the widespread abuse of fentanyl domestically.”