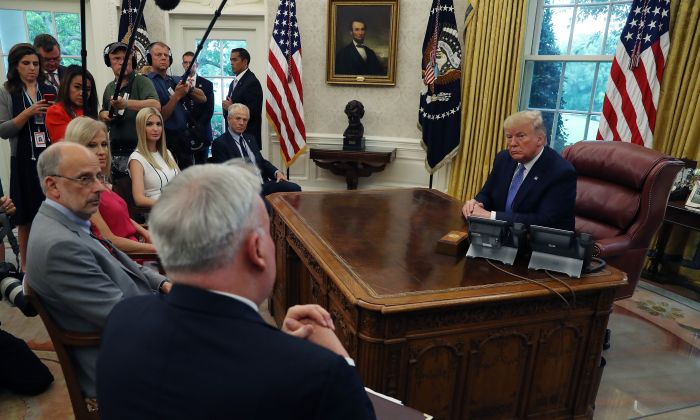 U.S. President Donald Trump listens as he gets an update from administration officials on the Fentanyl epidemic, in the Oval Office at the White House on June 25, 2019 in Washington, DC. (Mark Wilson/Getty Images)
US-China Relations

Chinese state media and officials have openly adopted a hardline stance against Washington since U.S. President Donald Trump announced plans to impose new tariffs on $300 billion worth of Chinese imports.

In an Aug. 4 commentary, Chinese state media Xinhua fired back that fentanyl, the synthetic drug that has contributed to the United States’ opioid crisis, was a problem for which “the United States only had itself to blame.” Meanwhile, data from the U.S. Department of Agriculture  (USDA) shows that China recently cancelled orders of 14,700 tons of U.S. pork.

Earlier this week, the U.S. and China delegations met in Shanghai for trade talks. Both sides said talks were “constructive.”

But according to U.S. economic adviser Larry Kudlow, Trump was not satisfied with the progress. On Aug. 1, he made a surprise announcement on Twitter to impose new tariffs on $300 billion of Chinese goods, effective on Sept. 1.

Trump accused Beijing of breaking its promises. He said in his Twitter message: “My friend President Xi [Jinping] said that he would stop the sale of Fentanyl to the United States – this never happened, and many Americans continue to die!”

Back in December 2018 at the Argentina G-20 Summit, Xi and Trump made negotiations, one of which was that China would enact policies to penalize the manufacturing and exporting of fentanyl.

China manufactures most of the fentanyl and fentanyl analogues found in the United States. In 2017, the country recorded more than 28,000 synthetic opioid-related overdose deaths, according to the U.S. Centers for Disease Control and Prevention, the majority of them fentanyl-related.

In a rebuke to the United States’ claims, Chinese state broadcaster CCTV on Aug. 3 interviewed Liu Yaojin, deputy director of the China National Narcotics Control Commission, an agency under the cabinet-like State Council.

Liu said the commission has been monitoring the production of fentanyl since May 1, when 25 types of fentanyl were classified as controlled substances in China.

Similarly, a Sunday commentary in the state-run Xinhua claimed that “the number [of fentanyl cases] is very small.”

U.S. lawmakers, officials, and experts have long expressed skepticism about Chinese authorities’ effectiveness in carrying out the regulations.

The fentanyl claims were part of a broader media offensive to describe the United States as the side that reneged on previous commitments.

Also on Sunday, Xinhua reposted a report from another state-run outlet, the Shanghai-based The Paper, which boasted of Chinese media launching “five consecutive attacks…with full force” in its coverage of the U.S.-China trade dispute, referring to five articles criticizing the United States.

State-run People’s Daily, CCTV, and Global Times have all published commentaries to criticize the U.S. decision to impose more tariffs, adding that Beijing was not afraid to fight back.

On the website of China Radio International, a state-owned radio broadcaster, an Aug. 3 commentary stated definitively: “The [U.S.-China trade talks] will never reach a good result.”

“How can we trust a negotiating party [Washington] that is unstable and erratic?” the article read.

After the negotiating teams concluded their Shanghai meeting, Xinhua reported on July 31 that China would buy more American agricultural products.

The Chinese-language Epoch Times published an analysis by He Qinglian, a U.S.-based Chinese economist, on Aug. 3, where she pointed out that Trump may have imposed more tariffs because despite Beijing promising since December last year to import more U.S. agricultural products, only one Chinese firm bought 68,000 tons of soybeans from the United States in late July. It is also a small order compared to typical orders.

Soybean and pork products are primarily produced in the American Midwest states, which largely voted for Trump back in 2016. That’s why Beijing wants to retaliate by enacting tariffs on U.S. agricultural goods.

“The Beijing regime is determined that this is the weakness of Trump. From that time, it has decided to negotiate slowly, using the delay to wait for changes, buying time to make bargains, and waiting until the [2020] election is over,” He Qinglian analyzed.

She added that Beijing believes it would be hard for Trump to win re-election if the trade talks are stalled without result. Then, it hopes it can negotiate better terms with a Democratic president.