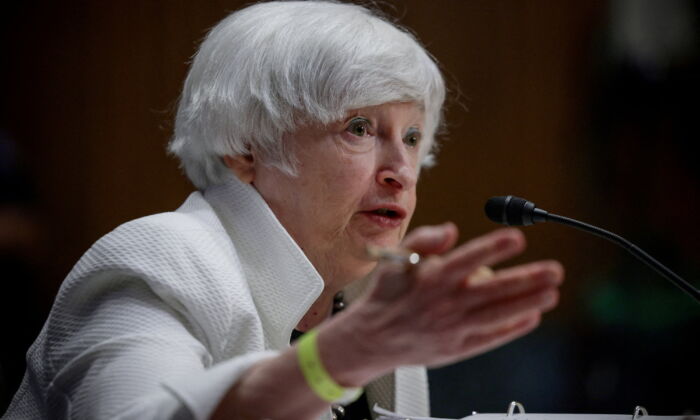 During a video call on July 5, Yellen “frankly raised issues of concern including the impact of Russia’s war against Ukraine on the global economy and unfair, non-market” economic practices by the Chinese regime, according to a brief readout of the meeting.

The statement from China’s Ministry of Commerce regarding the call doesn’t mention the U.S. concerns about Beijing’s unfair trade practices or the Ukraine war, although it said the two sides had “a pragmatic and candid exchange of views.”

According to Beijing, Liu “raised concerns about lifting tariffs and sanctions” on China and the treatment of Chinese companies during the July 5 call. However, the readout from the Treasury Department didn’t mention anything about that.

The conversation between the senior U.S. and China officials comes after President Joe Biden said last month that he was deciding what to do with Trump-era trade tariffs that are currently imposed on China.

Yellen is among those who say that lifting the tariffs could rein in historical inflation, which hit a 40-year high in May with consumer prices surging by 8.6 percent.

In a June 20 interview with ABC News, Yellen said some tariffs inherited from former President Donald Trump “serve no strategic purpose and raise [costs] to consumers.”

The viewpoint is at odds with that of U.S. Trade Representative Katherine Tai, who questioned the effect of removing more than $300 billion worth of China tariffs to fight inflation.

Tai told lawmakers on June 22 that she viewed tariffs on Chinese goods as “a significant piece of leverage” over Beijing, noting that progress on changes in the regime’s unfair trade practices has been “elusive.” She said there’s “a limit to what we can do” to address rising prices through tariff changes.

The Trump administration imposed up to 25 percent tariffs on Chinese imports in 2018 after an investigation concluded that Beijing had engaged in excessive government subsidies, intellectual property theft, and other unfair trade practices. In retaliation, the Chinese regime levied tariffs on about $90 billion of U.S. imports.

U.S. national security adviser Jake Sullivan said on June 27 at the G-7 summit in Germany that Biden and Chinese leader Xi Jinping are expected to speak in the next few weeks.