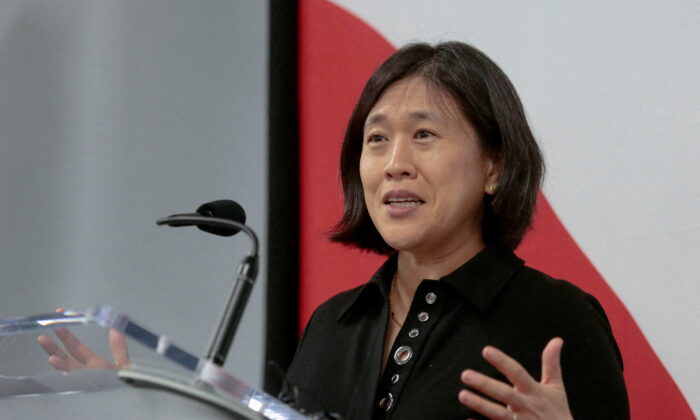 U.S. Trade Representative Katherine Tai told the U.S. Senate on Wednesday that “the China tariffs are a significant piece of leverage,” while President Joe Biden is considering lifting some tariffs on Chinese goods to fight inflation.

The Trump administration imposed up to 25 percent tariffs on Chinese imports in 2018 and 2019, since an investigation concluded the Chinese regime engaged in excessive government subsidies, intellectual property theft, and other unfair trade practices.

Inflation measured by the consumer price index hit a 41-year high of 8.6 percent in May, according to the New York Federal Reserve’s survey results on June 13.

Biden said on June 18 that he would speak with Chinese leader Xi Jinping “soon,” and that his administration is considering lifting some tariffs on Chinese goods to curb inflation.

On June 19, U.S. Treasury Secretary Janet Yellen told ABC News that bringing down inflation is Biden’s top priority and that “the tariffs we inherited, some serve no strategic purpose and raise costs to consumers.”

However, in testimony before a U.S. Senate Appropriations subcommittee, Tai said that removing tariffs would likely have a limited effect on controlling short-term inflation, and that “we need to be keeping our eye on the ball on this bigger picture,” which is protecting American trade interests against China’s plans to dominate important industries such as semiconductors.

Tai added that the Biden administration should focus on “converting this leverage into a strategic program that will strengthen American competitiveness and defend our interests in a global economy in which China will continue to play.”

“A trade negotiator never walks away from leverage,” Tai said.

Most likely, the Biden administration will not reach a decision before next week’s G-7 summit.

In retaliation to the 2018 tariffs, the Chinese regime also levied tariffs on tens of billions of dollars worth of U.S. imports.