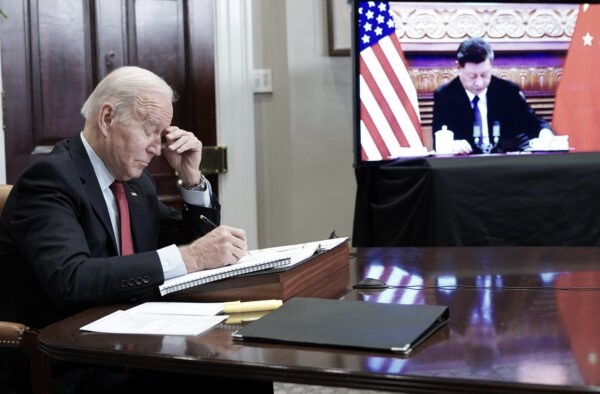 U.S. President Joe Biden gestures as he meets with Chinese leader Xi Jinping during a virtual summit from the Roosevelt Room of the White House on Nov. 15, 2021. (Mandel Ngan/AFP via Getty Images)
US-China Relations

President Joe Biden said on June 18 that he would speak with Chinese leader Xi Jinping “soon,” and that he is in the process of deciding what to do with Trump-era trade tariffs currently imposed on China.

Biden’s comments came amid ongoing discussion within his administration on whether to lift some tariffs on more than $300 billion worth of Chinese goods as part of efforts to rein in historic inflation. The duties were imposed by former President Donald Trump as part of his administration’s efforts to combat the regime’s unfair trade practices that have cost the U.S. economy billions of dollars.

“I’m in the process of making up my mind,” Biden told reporters near his beach home in the state of Delaware on Saturday morning.

Biden admitted last month that he was “considering” relaxing some taxes on Chinese imports, while emphasizing that he himself didn’t impose any tariffs.

The Trump administration imposed up to 25 percent tariffs on Chinese imports in 2018 after an investigation concluded the Chinese regime engaged in excessive government subsidies, intellectual property theft, and other unfair trade practices. In retaliation, the Chinese regime also levied tariffs on tens of billions of dollars worth of U.S. imports.

“We all recognize that China engages in a range of unfair trade practices that is important to address,” Secretary of the Treasury Janet Yellen told ABC News on June 20. But she added, “the tariffs we inherited, some serve no strategic purpose and raise cost[s] to consumers.”

While Yellen advocates for removing some tariffs to bring down consumer prices, she told lawmakers on June 8 that tariff cuts would not be a “panacea” for easing U.S. inflation which has hit a 40-year high.

“I want to make clear I honestly don’t think tariff policy is a panacea with respect to inflation,” Yellen said in response to a question on tariffs. “Goods account for only a third of consumption and it’s not clear exactly what the incidence and pass through would be” from tariff cuts to consumers.

Meanwhile, U.S. Trade Representative Katherine Tai has raised concerns about rolling back tariffs when China fell short of its “phase one” trade obligations.

Two years after signing the deal, China did not even get close to the targeted purchases. According to an analysis by Peterson Institute for International Economics (PIIE), China was obligated to buy $227.9 billion worth of American exports in 2020 and $274.5 billion in 2021 for a total of $502.4 billion.

However, China only bought $286.6 billion worth of U.S. goods and services in the two years, 57 percent of the $502.4 billion commitment.

Biden didn’t say when he would speak to Xi, but senior US officials have prepared a possible phone call this summer, an administration official said on June 16, according to Reuters.

According to the brief readout from the White House, the June 14 meeting between Sullivan and Yang involved “candid, substantive, and productive discussion of a number of regional and global security issues, as well as key issues in U.S.-China relations.”

Naveen Athrappully and Reuters contributed to the report.