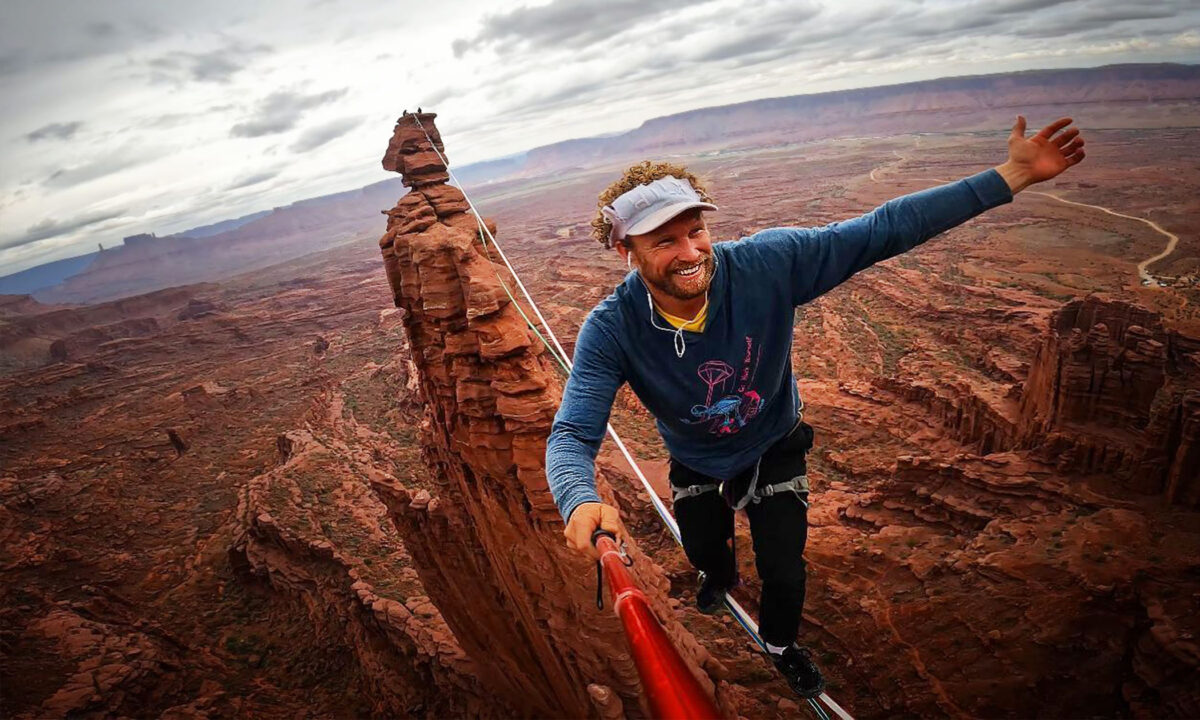 In a word full of distractions causing diminished attention spans, Andy Lewis is an anomaly. The 35-year-old slackliner must focus every ounce of his brain on his balance to avoid a potentially fatal fall.

Describing the feeling as he snaps impossible self portraits while walking lines between mountaintops, Lewis says he is 100 percent present.

“You feel your heart beat, you hear your breath, you are seeing, acting, and reacting as one in a moment where distraction is non-existent,” he told The Epoch Times.

“It is a moment of full awareness that empowers every molecule of your existence. Without a safety harness it’s up to you and the power of your mind and body to keep you safe.”

Originally from the Bay area, Lewis works in commercial film production, rigging, set designing, and performing stunts. A real-life action man, he also partakes in BASE jumping, and discovered slacklining 20 years ago.

“I was doing it every day, and the more I practiced, the more became possible,” he said. “The more that was possible, the more I imagined.”

For Lewis, slacklining went from hobby to sport to profession, and eventually became a kind of religion for him. Before long, the trend really began to take off; the festival scene helped energize the sport, and Lewis found himself at the forefront.

He has rigged lines at Leviathan, stretching between two of America’s tallest free-standing sandstone towers in Moab, Utah. Taking 21 days to rig and walk once, Lewis asserts Leviathan is one of the most legendary walks he’s ever done. Over 10 years later, he remains the only person to have repeated it.

The most common reaction from people viewing his high-risk hobby is incredulity; isn’t he completely terrified so high up, with no safety net? Lewis says that is one of the main points.

“I personally believe there is nothing more unhappy than a man that does not face adversity, for he is never given the chance to prove himself,” he said.

Of course, it takes many, many hours of intense training to become competent, and to stay safe on the wire.

“Even when you have done the training, it takes ultimate focus,” he admits. “Some people don’t like the stress of that commitment. And for a lot of people, trusting themselves is impossible.”

If that sounds scary—or crazy—the extreme-sports pro insists that slacklining is also great fun. One of the other things he most values about it is its versatility.

Speaking of one of his close calls in Yosemite last September, a friend captured him “dangling over danger with only the last of your grip keeping you from falling,” as he captioned on his Instagram, hanging with a sublime moon as a backdrop.

“This was a moment of pure bliss and creativity; unshackled by fear in any way,” the daredevil said.

Lewis has won world championships, broken records, and appeared on TV and in movies; but what he’s most proud of is learning what’s important in life.

“None of that really matters,” he said. “Being a good person and loving what you do is the core of anyone who is happy. Bringing others around you up. Winning with style and sportsmanship. Taking loss and success the exact same way.”

Whether it be helping kids learn slacklining or performing live in the Super Bowl half-time show before millions, it’s all been enjoyable.

“Even the training, and hardship, was fun in the end” Lewis reflected. “I am proud to say that I lived my life in the most spectacular of ways, barely was ever injured, saw the world, made enough money to survive, and now have a beautiful life I have created for myself.”

“It’s a great way to help others experience the desert—and it brings me energy and happiness to share those feelings,” he added.