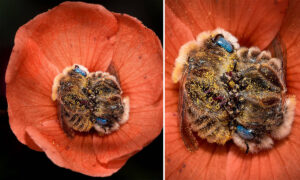 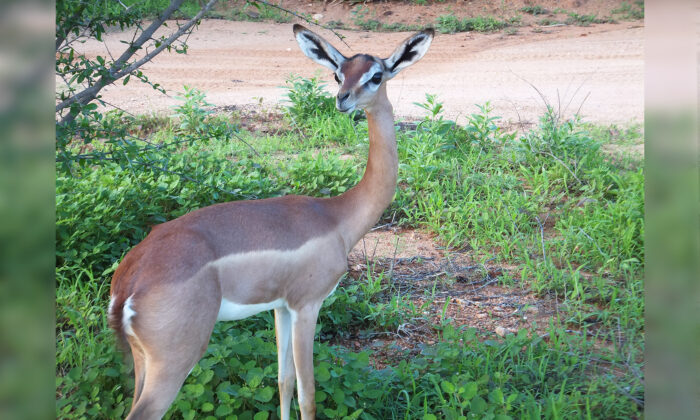 Amid the countless marvels of the animal kingdom there exists a type of African antelope, the gerenuk, famed for a unique quality: it can survive its entire life without ever drinking water.

The gerenuk—meaning “giraffe-necked,” owing to its long neck—is native to Somalia, Tsavo, southern Djibouti, and the dry, arid lands of northern Kenya.

In an incredible defense against its dry habitat, the gerenuk has developed the ability to get all the water it needs from foliage, Kenya’s Sheldrick Wildlife Trust explains.

A curious-looking antelope, the gerenuk has developed certain features to help it reach the tender shoots that its neighbors, the antelope and gazelle, cannot. A long neck with a small head, and the ability to stand tall on its powerful hind legs, enables the creature to reach the tops of shrubs and bushes up to 6 1/2 feet off the ground. They’re even taller than humans.

Large eyes and ears give the gerenuk a cartoon-like appearance, but not without purpose; its long eyelashes and sensory hairs on its snout and ears allow it to navigate the safest route through rough shrubbery.

Gerenuks also have an arsenal of defenses against losing water, including adapted nasal passages which prevent the evaporative loss, highly concentrated urine, and a sedentary lifestyle. Their choice of where to roam is also strategic; preferring to stay away from permanent water sources, the gerenuk avoids competition with more water-dependent species and higher concentrations of predators.

Another safety strategy is their preference for small groups. Gerenuks are often spotted alone, but groups of around five are not uncommon in Tsavo. Larger groups are more common as the land becomes more arid. In Somalia, as many as 25 to 30 gerenuks may browse together when foliage is rich and dense.

Sheldrick Wildlife Trust, one of Africa’s oldest wildlife charities and a leading conservation organization, got the opportunity to take a closer look at this fascinating species when they rescued an orphaned gerenuk calf, Nuk, in 2013. Posting on Facebook, the Trust explained that having lost his mother, the calf “surprised livestock herders by walking home with their goats.”

Nuk roamed free of his own volition after a year in care at the Trust’s Kaluku field headquarters. He made friends with a herd of impala, but was herded away by the males after growing horns and expressing an interest in their females.

Though the gerenuk is considered near-threatened because of poaching and habitat loss, it is hoped that Nuk will eventually find a gerenuk mate and start a family of his own.

“It seems he’s having a ball of a time and perhaps established his own territory,” the Trust’s communications and media manager, Amie Alden, told The Dodo. “Though it’s bittersweet not to see him, we are proud that he’s clearly found his place in the wild. A complete success story.”