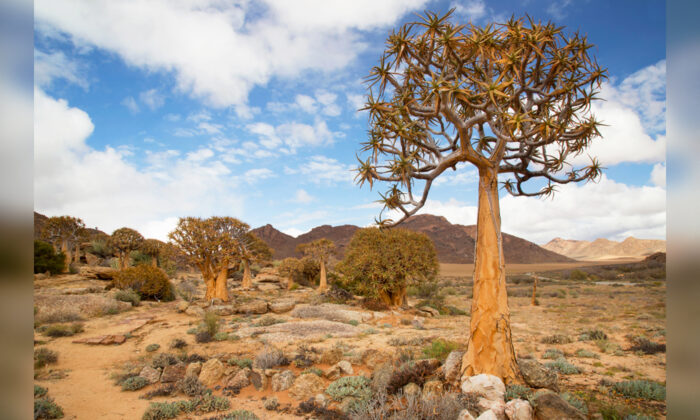 Divided by mountains, there is a thriving desert on South Africa’s Western Cape where bushy, sandy plains belie beautiful, botanical treasures. This unassuming landscape is the world’s only arid plant hotspot—and home to a third of all succulent plant species in the world.

Part of the region’s Sanbona Wildlife Reserve, the area of land falling under the “rain shadow” of the Warmwaterberg mountains, supports two separate biomes: Fynbos and Succulent Karoo. Both are rich with life, the reserve explains, some of which are found nowhere else on Earth.

Where herds of elephant, black rhino, and Cape buffalo once roamed, Succulent Karoo—the most species-rich semidesert on the planet—now boasts some 3,000 succulent plant species. Forty percent are endemic and don’t grow anywhere else.

Upon closer inspection, the Karoo’s low, gray-brown bushes are blooming with bright flowers in reds, pinks, purples, yellows, and oranges. The succulents survive the semidesert climate by storing water in their roots and plump, swollen leaves.

Colorful vygies, commonly known as carpet weeds, and crassula, or pygmyweeds, dominate over trees and taller shrubbery. While rainfall in the Succulent Karoo is reliable, according to World Wildlife, north of the mountains the land is drier, receiving only 150 millimeters of rainfall per year on average.

Some can bury themselves in the soil to minimize water loss, absorbing the sunlight they need for photosynthesis through translucent “windows” at soil level; some have very short life cycles, going from seed, to flower, to completion in just one growing season.

One of the most abundant succulents in the Succulent Karoo is the geophyte, a plant that stores water in a delicate, bulb-like, not to mention beautiful, appendage. But succulents are not the only living things that abound in the semidesert here.

Their fleshy leaves provide vital sustenance to many insects, including termites, monkey beetles, and long-tongued flies. In turn, these insects draw scorpions, tortoises, birds, lizards, and a curious little creature endemic to the region known as a Van Zyl’s golden mole—a tiny mammal with no visible eyes or ears—which tunnels just below the surface of the sand dunes.

The insects of the Karoo are excellent pollinators, playing a crucial role in flower morphology and the speciation of the area.

Yet, despite their hardy characteristics, the rich plant and animal life of this region are vulnerable to overgrazing by livestock, exotic plant poaching, and diamond and sand mining—human activities that conservationists are rallying against.

“It’s not adequately protected, and the race is to try and get more land under formal protection,” said Cobus Theron of South Africa’s Endangered Wildlife Trust (EWT), CNN reported. “While this environment looks odd and harsh, it’s actually very fragile.”

Succulent Karoo was designated a Unesco World Heritage Site by the International Union for Conservation of Nature (IUCN) for its status as the “most biologically-diverse arid area in the world.” Yet, only 7.8 percent of its biodiversity, critically-endangered vegetation, and delicate ecosystems are formally protected by provincial authorities.

As such, Sanbona Wildlife Reserve conserves and protects its land itself with income generated from nature-based tourism.

The government agency CapeNature also created a biodiversity stewardship program in 2002, recruiting farmers and landowners to create “wildlife havens” on their own properties to help preserve this extraordinary site for decades to come.