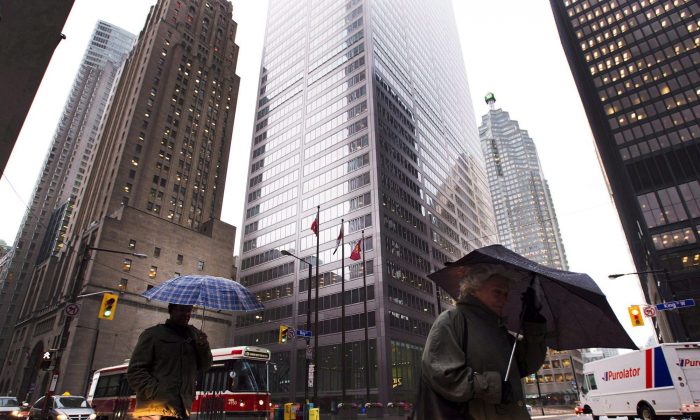 Canada’s financial establishment is about to be revolutionized by fintech—financial technology that puts loans, investment advice and a host of other services at the tip of a touchscreen. (The Canadian Press/Nathan Denette)
Business

Canadians eager to bank and invest with smartphone, establishment gears up for disruption
By Rahul Vaidyanath
biggersmaller
Print

As tech innovation disrupts industries like transportation and accommodation through companies like Uber and Airbnb respectively, it was only a matter of time before consumers expected similar improvements in financial services.

Global investments in fintech—jargon for financial technology—rose 225 percent to US$6.8 billion from 2013 to 2014, and the chess match between it and the big banks is underway.

A wave of entrepreneurs has emerged offering products aimed to alleviate the pains of those frustrated with traditional financial services.

But it’s still early days. Fintech is a threat to the juicy margins the establishment has been reaping for decades, but the big banks aren’t going away anytime soon. The financial services industry in Canada has been slow to innovate, in part because the big banks came through the financial crisis with flying colours.

We’re on the cusp of a dynamic shift that no one has ever seen before.
— Adam Nanjee, Head of Financial Technology, MaRS Discovery District

They’re doing what they can to protect their turf and add value for their shareholders. And regulators want the big banks to remain in a position of strength. Therein lies some of the challenges for fintech.

“We’re on the cusp of a dynamic shift that no one has ever seen before,” Adam Nanjee told a standing-room-only hall at the World MoneyShow conference in Toronto on Oct. 30.

Nanjee is head of the fintech cluster at MaRS Discovery District , one of the largest innovation hubs in the world, conveniently located a few blocks north of Toronto’s financial district. MaRS’ fintech cluster debuted in February and Nanjee was invited to speak about the emerging trend in financial services that is changing how people get loans, manage their bank accounts, and get investment advice.

Of fintech’s segments, the rise of bitcoin and peer-to-peer lending have arguably had the biggest impact globally.

“These developments are pushing more and more financial activity outside the traditional financial sector,” Bank of Canada senior deputy governor Carolyn Wilkins said in a Nov. 13 speech in Toronto.

Kevin Sandhu, 32, spent nearly a decade in investment banking. Now he’s the CEO of Grow, a Vancouver-based rebrand of Grouplend, a marketplace lender.

He aims to develop “an online digital finance company that uses technology to create the best banking products.”

“We come in with a much more responsible view towards lending,” says Sandhu. He says Grow gets a fuller picture of what borrowers can afford and the interest rate they should pay.

Companies like Grow look to provide bank products at cheaper rates with the convenience of a smartphone app that isn’t limited to business hours.

But it’s not about replacing human interaction. If big banks want to, they can offer Grow’s products. Sandhu understands some people are more comfortable banking face-to-face, but that shouldn’t rob them of the best fintech products on the market.

Convenience and a better banking experience are what Daniel Eberhard, 29, CEO of Koho, is building. Vancouver-based Koho is a “neo-bank,” a mobile-first banking platform without banking fees that includes handy features to track spending, send money, and set goals.

“We have world-class banks, but I think that there are things from a consumers’ standpoint that they don’t do well,” said Eberhard.

One of those is bank statements that clearly communicate the fees clients are charged.

“People expect Airbnb-type experiences and they just weren’t getting that from their bank,” Eberhard says. Koho currently has a beta site and aims to go live in about two months.

The world of banking is rapidly changing and we need to be at the forefront of it.
— Jeremy Bornstein, Head of Payments Innovation, RBC

One startup that’s very much live and poses a serious disruption to the investment management business is Toronto-based Wealthsimple. At 27, CEO Mike Katchen has already been a McKinsey consultant and built a Silicon Valley startup and sold it.

At 25, he began with a spreadsheet to help his friends invest on their own and turned it into an online investment adviser.

Wealthsimple has simplified the process of signing up for an investment account—10 minutes on your cell phone instead of pages of paperwork. The common theme again is creating a great customer experience.

“We prefer calling ourselves an on-demand advice or light advice,” explains Katchen. “Every client of ours still gets dedicated advisers that are licensed representatives. So there’s a human advice and a human component to the business.”

With a tailored portfolio of exchange-traded funds (ETFs) and a simplified fee structure, WealthSimple calculates an investor would save $10,080 on investment management fees over 20 years given a $25,000 account balance.

Wealthsimple’s youngest client is 18 and its oldest is 92; 80 percent of its clients are under 45, which is roughly the inverse of the industry, according to Katchen.

The big banks have been closely watching these developments, as the “unbundling” of financial services is the biggest threat to their business models. In response, they can partner with or acquire fintech startups. They can also innovate within their organizations.

“We’re just trying to again maintain that healthy paranoia of understanding that, yes, we have a successful business today, but the world of banking is rapidly changing and we need to be at the forefront of it,” says Jeremy Bornstein, RBC’s head of payments innovation.

According to the Canadian Bankers Association, the six largest banks have spent $64.9 billion on technology between 2005 and 2014, with $9 billion spent in 2014 alone.

In RBC’s case, it has invested heavily in making payments easier, safer, and more rewarding for its customers. Bornstein’s team’s lab is very much like a startup.

“You’ve got people literally sitting on top of each other, coding together, and figuring out how to build the next great chip technology tool for us,” he says.

Other business units within RBC also have their own focus on innovation, Bornstein says.

While some of the old guard in the industry may be skeptical of the threat to the big banks, which have weathered their fair share, Bornstein feels it is real this time.

“People didn’t have supercomputers [smartphones] in their pockets before and now they do, so I definitely feel this time is different,” he says.

The banks see change and competition on the horizon, but fintech doesn’t necessarily see the latter.

For many fintech companies, the reality is that being bought out by a bank may be the best exit strategy. But until then, they hope to flourish and work with the banks.

“We want to be constructive and not adversarial in the market,” Eberhard says, having had conversations with banks and establishing partnerships with various financial institutions.

“It’s not as controversial as people make it out to be, I think.”

For Katchen and Sandhu, the waters seem a little murkier.

“We’ve been very open with them from Day 1 that we’d love to partner with them, to help bring better advice and more quality advice to Canadians. We’ll see how open-minded they are about working together, though,” says Katchen.

Wealthsimple probably won’t threaten advisers at banks who have great relationships with and add plenty of value for their clients, but Katchen feels that mediocre advisers will feel threatened.

Sandhu says the relationship will be defined by the banks themselves.

“It’s up to banks today to determine whether we are cooperative or combative against them,” he says.

Banks will certainly be challenged by fintech’s products, but could benefit by incorporating those offerings to better serve their clients and thereby retain them.

Sandhu says he has seen a shift in the tone and banks seem more inclined toward cooperation than a year ago.

But that cooperation has a long way to go. A report by the University of Toronto’s Munk School of Global Affairs says Canadian banks are often “slow to respond to opportunities to work with emerging fintech firms,” and predicts that the relationship between the two camps will be competitive instead of cooperative.

What prevents greater cooperation is a “cultural and institutional divide between startups and the bank,” according to the report. Young entrepreneurs seek connections and capital, but older bank employees have little incentive to rock their massive boats.

Professor Dan Breznitz, one of the report’s co-authors, points out that because the big banks pursue their own strategies for dealing with fintech—effectively creating silos—a proper ecosystem for growing fintech in Canada won’t be created.

“They’re trying to do it as if this is something they can solve by themselves within their organization’s borders,” says Breznitz.

Management consulting firm Accenture, looking at New York as a major financial centre, suggests banks should “act open” to reap the benefits of fintech innovation, and that collaboration involves a “culture shift.”

Another obstacle for fintech in Canada is the regulatory regime, which Breznitz says is wary of innovation. Having different provincial regulators instead of one federal regulator also creates costly hurdles.

“The perception is there’s a very high chance that, even if you develop a successful product, you might find out that you’re not allowed to offer it in Canada,” says Breznitz.

Breznitz concludes that more Canadian firms will head south of the border where there are fewer restrictions and more opportunities.

Nevertheless, how a fintech startup approaches the regulatory challenge can be a big determinant of its success.

In Koho’s case, the first thing Eberhard did was de-risk his business model by spending six months looking at regulation.

“We developed what we thought was a list of the biggest risks in the business and just sequentially worked through them. And regulation was at the top of that list,” Eberhard says.

Sandhu says regulation has to get the balance right between shutting down the bad actors and not stifling innovation altogether with onerous compliance costs for small companies.

Fintech is creating new business models and challenges for regulators.

“Our business models are fundamentally different than [those of] our predecessors, and as a result, the existing regulatory framework doesn’t necessarily apply to the risks that are presented in the shadow lending or alternative lending space,” Sandhu says.

Wealthsimple has come a long way with regulators about the form of relationship it has with its clients and how their investments are appropriate and protected. Wealthsimple stresses that email or phone communication is actually better for some clients than infrequent in-person meetings.

“We’re regulated the same as the brick and mortar—everything,” Katchen says. “So they’re very supportive of what we’re trying to do.”

The Office of the Superintendent of Financial Institutions (OSFI) is monitoring fintech developments. “We expect federally regulated financial institutions to have processes and controls in place to manage their risks including from potential competitors,” OSFI told Epoch Times in an email.

Fintech has early adopters, but it hasn’t reached critical mass yet. It’s clear Canadians want more services at their fingertips and market demand is growing.

And it won’t just be millennials who want to send a friend money through their smartphones without paying a fee. They’ve been getting their parents on board and fintech is slowly seeing an older demographic adopting its products.

“I think that the next five years in this business are going to be so exciting, and we’re just scratching the surface on what’s going to change,” Katchen says.

Wealthsimple does 80 percent of its new business through its smartphone app.

“We’re going to see a tremendous transformation, and I think nobody is fully awake to what’s going to happen in the next five years. It’s really exciting.”

Eberhard agrees. “Fintech is coming. I say that with certainty,” he says.

Revolutionizing an industry is never easy, and fintech startups face significant challenges in Canada. However it plays out, the consumer will ultimately benefit. The big banks will also learn a thing or two.