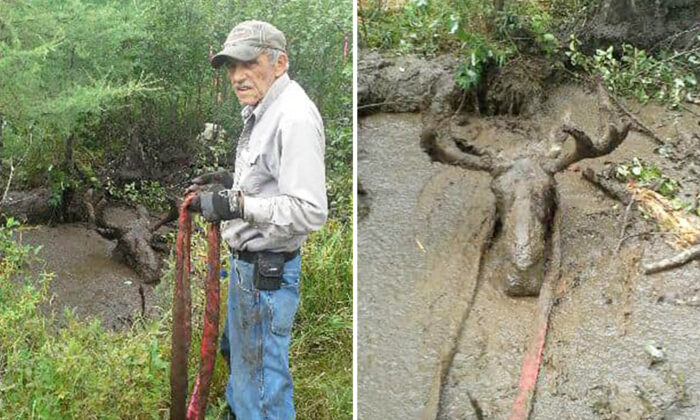 When an Ontario man came across a moose stuck up to his neck in a muddy swamp, he called two friends for help. With no official bodies on hand to perform the rescue, the men took it upon themselves to save the moose.

Prospectors Maurice Valliere and Pat Greba, both 70, were contacted by 82-year-old Helmer in the town of Timmins on Aug. 25.

“Thanks to my two prospector friends, this moose is back on the loose,” wrote Desloges. “They worked hard to help rescue this moose from certain death.”

“They tried contacting MNR [the Ministry of Northern Development, Mines, Natural Resources and Forestry] for over an hour with no response,” he said. “Pat used his Argo to pull the big guy out. Way to go, guys!”

According to Desloges, the moose was discovered in the bush off Timmins’ Highway 655. Valliere—who believes the muddy swamp was once a roadside ditch—lives nearby with his Labrador retriever.

“I was at home and I got a call from a buddy saying he’s in the bush, taking soil samples, and he’s found a moose 20 feet from the road,” Valliere regaled to blogTO.

Armed with map coordinates, it took the two 70-year-old prospectors over an hour to clear a path for Greba’s Argo ATV. They initially struggled to find the terrified moose, who was nearly invisible in neck-deep mud. The moose’s mouth and eyes were covered in mud.

“I was hoping to try to go around his stomach and try and get him out, but he was in too deep,” Valliere told Canada’s CBC News. “There’s no way I could have jumped in there, so the only option I had was to go around his horns.”

The mud-covered moose lay on his side to catch a breath before jumping up suddenly, one strap still attached to his antlers. The prospectors took photos of his departure to celebrate their successful rescue.

In an email to CBC News, the Ministry of Northern Development, Mines, Natural Resources and Forestry (NDMNRF) claimed their Timmins office never received a call about the moose stuck in the mud. Rescues such as these, they stressed, are “rare” and can be “dangerous.”

“Often the outcome for the moose is unsuccessful,” they explained, “especially if it has been stuck for some time, leading to capture myopathy: muscle damage resulting from extreme exertion, struggle, or stress.”

The quick-thinking prospectors Valliere and Greba struck lucky that day, and Desloges’s Facebook post went viral, amassing some 1,600 reactions. Yet neither thinks their actions were heroic.

“Everyone in Timmins would have probably went out and helped,” said Valliere. “We all love our animals here … It wasn’t a big deal, but I guess it turned out to be a little bigger deal than I thought it would be.”