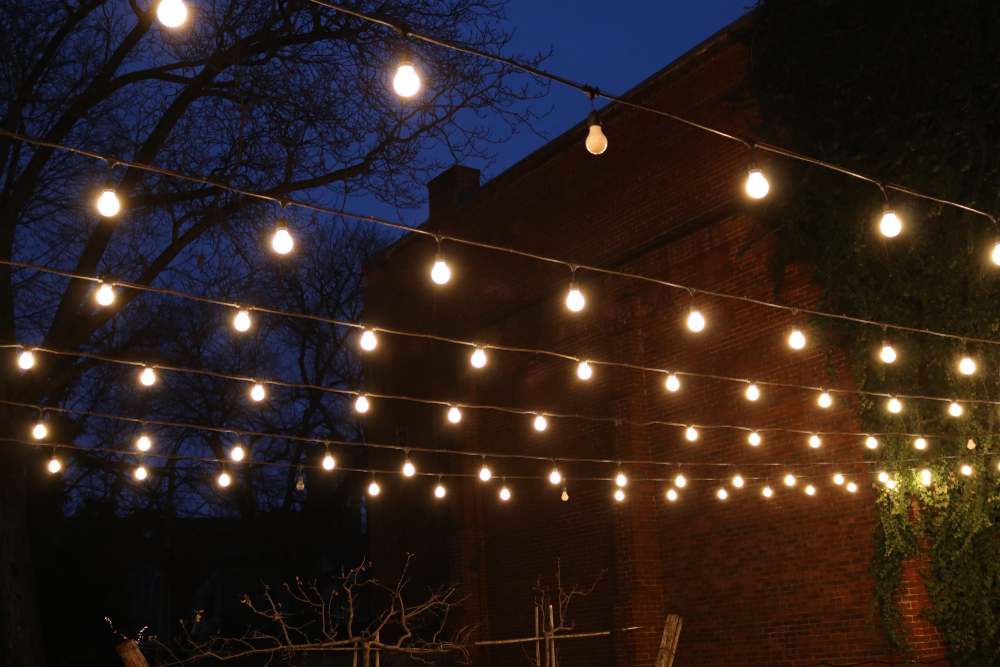 Decorative lights can add whimsy and wonder to our backyards—but they come with negative effects on the environment and the wildlife we share it with. (rob5taylor/Shutterstock)
Home

Turn Out the Lights, Enjoy the Stars, and Save Our Natural World

Most people love fairy lights. The dainty luminescence with which we festoon our gardens and verandas delivers an air of Santa’s grotto enchantment. The thought of a fancy evening soirée with a glass of fizz—sans garden illumination? The horror of it! Like fireworks, the bright colors delight our senses and take us back to childhood memories of festivals, holidays, and all things exciting.

Growing up, Christmas was the time when it seemed the whole world was covered in them—every house front, every garden, every tree (even deciduous ones!). Now, they seem to be lighting up our neighborhoods every day of the year. Meanwhile, motion sensors on our houses trigger lights strong enough to illuminate an entire football stadium when an utterly terrified nocturnal animal passes by.

It may seem strange to think about light as a form of pollution, but that it is. It even has the fancy scientific moniker of “artificial light at night” and an (in my opinion, hilarious) acronym of ALAN. “Alan! Turn it down, you’re blinding me!” “Alan! If I’ve told you once, I’ve told you a thousand times!” Not only is ALAN direct light pollution from sources including street lighting, vehicles, domestic lighting, and advertising (right now, I’m picturing Times Square), but also indirect “skyglow” pollution—the scattering of light upward due to atmospheric aerosols.

Last year, I may have had a word in the ear of the men who installed the new streetlamp opposite our house. This may have resulted in the switching off of said lamp two hours before every other lamp in the county. (I’m saying “may” of course. I “may” deny it in a court of law.)

Over the past century, light pollution has increased gradually (apart from opposite our house). It has been estimated that an increase of approximately 6 percent occurs annually, although this varies enormously and is dependent on geographic location. Light pollution can have adverse effects on the circadian rhythm of both plants and animals, in particular the feeding, reproduction, and development of insects.

The larvae of many moth species manifest inhibited feeding at night due to artificial light. This leads to a reduction in their body mass. Moths, as well as other nocturnal insects, can regularly be seen incessantly flying around porch lights and bashing themselves silly on the glass. This attraction to artificial light commonly results in their death, some by direct contact with the light, others through exhaustion. Moths’ ability to avoid bats’ echolocation is also reduced as a result of artificial light, and so a greater number may be lost to predation.

One issue is the type of light used and the color it emits. Although visual systems vary from species to species, the general rule is that the shorter the wavelength of light, the greater the number of species attracted to it. Now put that information together with the fact that billions upon billions of lights—commonly cold, white light, which has a shorter wavelength—shine out at night.

As insect numbers are declining due to light pollution (as well as other environmental factors), species that rely on them are suffering. Moths, as well as other nocturnal insects, are an intrinsic part of the food web.

During their larval stage, they convert plant biomass into animal biomass (by converting the plant matter they eat into body weight). As both caterpillars and adults, they’re a crucial food source for multiple species, including mammals, birds, and amphibians, as well as predatory and parasitoid insects. To illustrate: Although some species of bats found in the UK are drawn to hunting around artificial light, most avoid it and, as a result, suffer from a reduction in foraging grounds and an ever-decreasing supply of food.

Moreover, moths pollinate a huge percentage of the food we, and other animals, eat.

The next time you go out at night and strain to see the stars, take a look at how many lights are on around you. Are they all really necessary? How would you feel if your day and night were constantly disrupted—your daylight robbed and turned into 24/7 darkness? Or how about having a light shone in your face when you wanted to sleep?

We share this planet with many other organisms—diurnal (active during the day), crepuscular (active at twilight), and nocturnal. We all need to remember how we’re part of something so much bigger than just us.