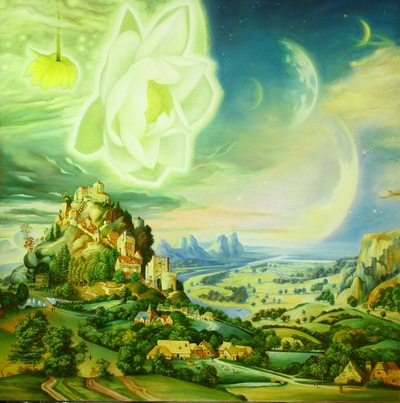 The idea for this oil painting of an idyllic village with a sacred lotus flower blooming in a distant galaxy came to Huang Guangyu in a dream. (Minghui.org)
Arts & Tradition

Truth and Beauty: The Story of a Talented Artist Couple

When Huang Guangyu and He Wenting met and began dating, they already had two big things in common: they were both artists, and they both practised Falun Dafa, a spiritual discipline handed down from ancient China.

Huang and He married in 2012 and set up home in a village near Guangzhou College Town in southern China. Huang was already an accomplished artist, having graduated from the Guangzhou Academy of Fine Arts with a major in oil painting and going on to have his works exhibited.

His studies focused on the techniques and spirit of classical painting. After participating in an exhibit at the Guangzhou City Museum in March 2012, his works were included in Tone and Color Theory by Li Zhengtian, a renowned Chinese artist and philosopher.

Huang believed that art must always stick to truth and beauty, and he continued honing his technique in his own realistic style while also learning to paint in the style of the great Renaissance masters.

He Wenting demonstrated a talent for both writing and painting when she was young. At age 15, she became a member of a local writer’s association and had stories and comics published in several newspapers. She also wrote poetry.

In 2010, she went to Guangzhou to study aesthetics and painting under Li Zhengtian and his wife Ai Xin. Although she did not have formal training in painting like Huang, she developed a keen sense of color and beauty. During this time she also wrote commentaries on several of Ai Xin’s artworks.

They both loved traditional Chinese culture and started to express it using Western oil painting techniques, all along refining their talents while also progressing in their spiritual life through following the teachings of Falun Dafa and its guiding principles of truthfulness, compassion, and tolerance.

Sadly, the couple’s hopes and dreams ground to a halt when they became victims of the brutal persecution campaign against Falun Dafa adherents that was launched by the Chinese Communist Party in July 1999—a campaign that continues today and has resulted untold suffering and death.

In December 2013, Huang and He were illegally arrested and their peaceful home, full of finished and unfinished works and a variety of painting materials and sketches, was ransacked. They were held in detention until the following May, when they were sentenced to a three-year prison term, according to Minghui.org, which documents the Falun Dafa persecution campaign.

When He was released in November 2016, she managed to smuggle out the sheets of tissue paper she had used as a diary to secretly record the torture and abuse she endured while in prison. Huang was also released at that time.

Little is known about their lives since then, but their art and its inherent beauty and purity will never diminish.