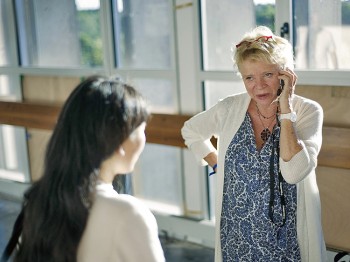 PARENT CONTACT: One of the most dreadful moments for a parent is getting a call from their child's school requesting a disciplinary conference. (Bernard Loubinoux/Getty Images)
People

One of the most dreadful moments for a parent is getting a call from their child’s school requesting a conference about a problem the child has caused—exceeding the general limits of classroom mischief and thus requiring a more serious intervention.

This can set off a frightful storm of emotions, including feelings of anger, fear, and usually a strong dose of embarrassment and shame. However, it’s often those feelings that cause parents to make mistakes in how they respond to the school system and their child. That’s why, if you want to handle this scenario effectively, it’s a good idea to think ahead about how to approach it.

One big cause of mishandling yourself with a child is making hasty, emotion-driven decisions. Blurting out an ill-conceived consequence before thinking things through may force you to stick with a decision that you don’t really want, or to back down and open up all future consequences to negotiation with your child. A good first step is to take time to sort through exactly what you are feeling. Don’t back yourself into a corner.

Try to describe your own feelings. They may come from memories of your own childhood troubles or bullying you experienced in school. School bullying is often a highly emotional trigger point for parents. It’s also a primary source of many problems that trigger the school discipline system. Your child could easily end up in trouble whether they were the instigator or the victim.

Whether it’s about bullying or something else, are your own experiences driving some of your reactions? Once you have taken the time to identify the root of your emotions, you will be in a much better position to make sure your decision-making is truly for the purpose of teaching your child right from wrong, instead of allaying your own fears or avenging your anger.

Listen to All Sides

It’s important to hear school personnel’s version of the story and your child’s. Try to earnestly listen to and understand what the school has to say. They see your child often and will know any other children involved. They will be able to tell you if this is an isolated incident or a pattern of behavior.

While there are times when mistakes are made, or even prejudices at play, more often than not school personnel give an accurate account of what really happened.

There are a few reasons why it’s very important that your child get to tell their side of the story. One thing is, they can add details or reveal something important that the school staff had missed. Also, allowing the child to tell their side of the story without interruption or judgment is going to make it easier for them to accept any necessary consequences. It’ll also make it much more likely that they will be able to learn and grow from the incident.

I have seen frequently school staff not wanting to take the child’s story into account because it may be full of excuses and justifications. It’s not that you should trust your child implicitly without reservation, but just try to listen impartially. As a therapist in these situations, I have often intervened with school staff and parents to make sure the child was heard without interruption and criticism.

It’s true that most children will try to shift the blame away from themselves and justify their actions. Shifting blame and making excuses is a typical reaction for someone socially and emotionally immature. So, it’s not surprising that children react this way.

School systems should keep parents informed about what is happening with their child at school. However, I have found that one of the main reasons why school systems want to involve parents is to help them punish the bad behavior out of the child.

Schools systems generally have very extensive behavior modification systems in place, punishing and rewarding children to produce whatever sought after behavior. This approach tends to be quite prevalent throughout most institutions today. This method has its strengths and weaknesses, but it’s not comprehensive enough itself to really help people develop and grow. In fact, if it’s used clumsily it can cause a great deal of resentment—stifling growth and development.

When a child is punished, they may learn to fear getting caught doing something wrong, but they can continue blaming other people for their problems. Learning the ins and outs of punishment and reward, some kids begin to manipulate others.

Usually school systems institute sufficient consequences to let the child know that they did something wrong. So what is left for a parent to do? Since you have listened extensively to your child’s story, this gives you an opportunity to comment on it. You can help them identify the feelings and emotions they were experiencing that may have contributed to the incident, increasing their emotional maturity and vocabulary.

The most important step is talking with your child about other choices they could have made, given the scenario they were in. You can replay the scenario with them and let them come up with some of their own ideas of what they could have done differently, helping them come up with a plan to avoid falling into the same trap again, thereby preventing future incidents. If you can get your child to understand that you have helped them take a step toward accepting responsibility for their actions, that is real growth.

Michael Courter
Follow
Michael Courter has a master’s degree in Social Work with distinction from California State University Chico and is certified in Parent Child Interaction Therapy. He has been treating individuals and families since 2006.
SHARE
EmailFacebookTweetCopy Link
You May Also Like