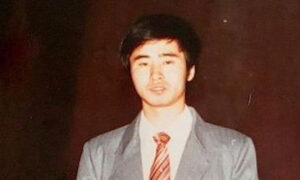 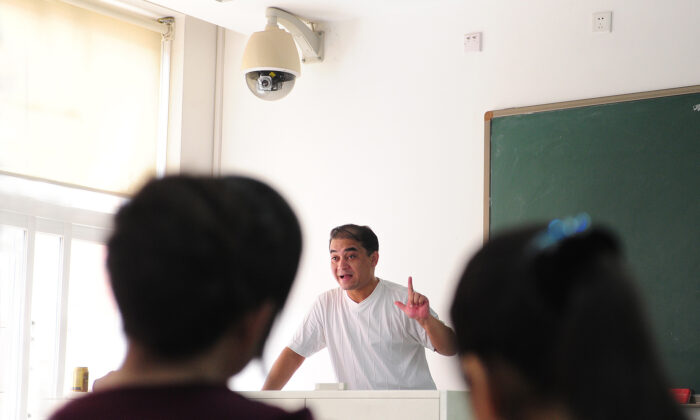 Ilham Tohti, a Uyghur professor of economics, delivers his lecture under a security surveillance camera mounted above the teacher's podium in a classroom in Beijing on June 12, 2010. Tohti was sentenced to life imprisonment in 2014 on charges of inciting separatism, and his family lost all contact with him in 2017. (Frederic J. Brown/AFP via Getty Images)
People

Treatment of Teachers in Communist China Versus Around the World: ‘It’s Killing Humanity’

The Chinese Communist Party (CCP) has one more blood-red feather in its Marxist cap for not hesitating to persecute—indefinitely incarcerate and even kill—school teachers who refuse to submit to its totalitarian ideologies.

Needless to say, it is the duty of citizens and rulers to honor the dignity of their teachers who work hard to lay foundations for a flourishing society. However, the CCP has failed to stay unbiased when it comes to its educators’ religious faith.

While teachers around the world endeavor to guide children toward their inner moral compass—often by being a leading role model with their own faith and values—their Chinese counterparts are denied the right to play this role as their spiritual beliefs are forbidden if they wish to teach.

The communist regime is pursuing strict measures to censor any religious or ideological influence in classrooms, reported Bitter Winter. Their goal is to “ensure that education and teaching adhere to the correct political direction,” the report said.

The International Christian Concern (ICC) reported in May 2020 that Wenzhou city, Zhejiang Province, had reportedly required school teachers to “sign a pledge to not believe in any religion.”

Some of the key requirements in the document, titled “Teacher’s Promise to Not Believe in Any Faith,” include the following: “firmly establish a Marxist religious view, strengthen atheism education, do not believe in any religion, do not participate in any religious activities, do not preach and disseminate religion in any place.”

A Christian teacher in Shenyang, Liaoning Province, was coerced to quit her job in August 2019, reported Bitter Winter. Another kindergarten teacher who is a member of the state-run Catholic church told the magazine that specially assigned personnel work to “monitor and report on religious teachers and students.”

“They were told to give up their faith, and some have been designated as key targets of surveillance, the authorities fearing that they will develop ‘counterrevolutionary influence,’ collude with foreign forces, and cause chaos,” the anonymous teacher told Bitter Winter.

In one of the countless other incidences, Zhao Xin, a teacher at the School of Economics in Beijing Technology and Business University, was illegally arrested and detained in June 2000 while she was doing meditative exercises of the Falun Dafa spiritual system in a park in Beijing.

Although she was known as a conscientious person and admired by her colleagues and students for her moral integrity, the 32-year-old Zhao was brutally beaten three days into her arrest. The severe torture fractured her fourth, fifth, and sixth cervical vertebrae and she became blind in her left eye. Sustaining life-threatening injuries, she was left paralyzed before passing away six months later, reported Minghui.org.

In another instance, Zhang Yan, a middle school music teacher from Mianyang City, Sichuan Province, was incarcerated for a total of 2,208 days in various detention centers, prisons, a forced-labor camp, and a brainwashing center before she lost her life at the age of 46 in February 2020. She, too, was a Falun Gong adherent.

Zhang helped students after class at no charge and earned the respect and admiration of parents for not taking money under the table. However, the CCP labeled her, as they have countless others, as a “state enemy” for refusing to renounce her faith.

Moreover, Zhao’s and Zhang’s stories are not isolated cases. Since the CCP began persecuting Falun Gong adherents in July 1999, the communist regime has ordered schools at all levels, from elementary to university, to publicly denounce the spiritual practice.

The school activities of teachers and students who are Falun Gong adherents are tightly monitored. The authorities even forcibly make them watch brainwashing videos defaming the practice’s universal principles of truthfulness, compassion, and tolerance that are, ironically, freely practiced in over 100 countries worldwide.

Teachers Around the World

In stark contrast, teachers in other countries are honored for their high morals and refined character.

Erik Fehér, a 39-year-old fine arts teacher at an art school in Nitra, Slovakia, told The Epoch Times that it is crucial to expose China’s “persistent persecution” of faith.

“It is not that we are not affected,” Erik said. “Everything is interconnected. We are also a country that was once ruled by a communist regime. In China, people are cruelly persecuted, tortured, imprisoned, and their organs are forcibly taken for the purpose of transplantation. It is not all right.”

Erik, who began practicing Falun Dafa four years ago, said that by refining his character through the core principles of being “true, good,” and to “endure,” he has become more selfless. “I find it easier to handle conflict situations when I am less egocentric. I am becoming a calmer and more balanced person,” he said.

Fortunately, having the opportunity of living in a free society, Erik endeavors to positively influence his teaching-learning process by helping his students appreciate the “essence of moral and spiritual values” and understand the importance of respecting human rights.

Meanwhile, not far away from China, a 51-year-old school headmaster and education officer in India, C. N. Pradeep Kumar, said he is “lucky to be born in a democratic country” where he can practice his faith without any fear of persecution.

With over two decades of teaching experience, Pradeep affirms that teachers are the “main pillars” that support the future of students. He condemned how the communist regime exploits and brainwashes innocent school students to spy on their own teachers of a certain faith, and then report on them, leading to their arrest and persecution.

“Students are not yet grown up enough to decide good or bad practices. The students may not understand the crooked face of the CCP,” Pradeep said.

He said the way the communist regime is persecuting teachers and educators for practicing the fundamental principles of “Truthfulness, Compassion, and Tolerance” is terrifying. “It is killing humanity,” he said.

Pradeep, from the town of Kolar in the southern Indian state of Karnataka, strongly believes that his faith has made his teaching profession “a wonderful thing.”

“I am able to understand the educational aspects like curriculum, textbooks, syllabus, and various other activities related to teaching and learning a way better by looking at them from a moral perspective,” he said, adding that if moral values are introduced to children in a right way and in a right environment, they can lead to positive behavioral changes.

In the land of communist Vietnam, a 50-year-old school teacher in the capital city of Hanoi echoes the same sentiment as Erik and Pradeep.

Vi Minh upholds that a teacher’s mission is to empower students with the wisdom to discern what is right from wrong; a tolerant and understanding teacher with their character rooted in upright moral conduct can guide students effectively.

“Truthfulness-Compassion-Tolerance’ is good, especially for the young generation,” she said. “It’s so sad and disappointing when those ethical values are trampled.”

She said, due to the Chinese regime’s influence and propaganda, even in Vietnam to some extent, Falun Gong adherents face a risk when going outside to practice the five meditative exercises.

“Falun Gong is legal in Vietnam,” she said, “so we should be allowed to have the freedom to practice and follow our faith.”