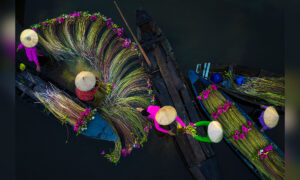 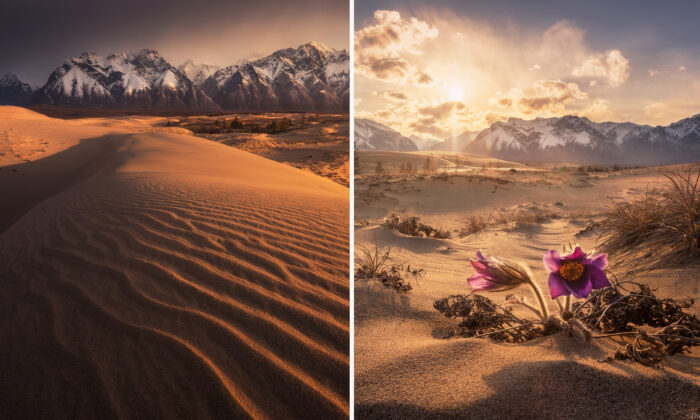 Beside ice-crested mountains, lakes, forests, and swamps, one desert in Siberia defies expectations. Although its rolling dunes and sandstorms typify deserts elsewhere, the surreal Chara Sands stand out as one of the most peculiar—not to mention beautiful—deserts on Earth.

The Chara Sands emerged from the remains of a dried-up lake in the foothills of Kodar ridge more than 40,000 years ago, according to Russia Beyond. Today, it’s one of the world’s smallest deserts, covering a mere three–by-six-mile area; though what it lacks in size, it makes up for in sheer magnificence.

Part of what makes this desert so striking is its abrupt transition from sand to lakes, swamps, and vast forests. The dunes reach up to 80 meters high; while two lakes, Alyonka and Tayozhnoye, bookend the Chara Sands, beyond which the land is lush with forest greenery, or “taiga.”

Nor is the desert static; winds are constantly shifting the dunes in a north-easterly direction, toward the woodland. Far from being the middle-of-nowhere landscape that it may seem to be, the sands aren’t far from civilization, according to travel blog Russia Trek. Novaya Chara Station on the Baikal-Amur railway is just 10 kilometers away.

Though hard to reach across rough rivers, the Sands are favored by tourists, many of whom attempt to immortalize the desert’s beauty through photography. Russian-born, Tuscany-based Daniel Kordan is among these stalwart photographers.

In July, Kordan shared a set of photos on Facebook, captioning them: “Stormy skies over Kodar mountain range at the feet of Chara desert. From my recent exploration of Transbaikal territory in Russia.

“Pure wilderness. Desert next to the ice.”

Kordan captured the breathtaking Chara Sands covered in snow. During winters, the temperature in Siberia can drop to as low as minus 50 degrees Celsius (minus 58 degrees Fahrenheit).

“There is always a pleasure in the pathless woods: Places I always returned and always admired,” Kordan wrote on his website. “Nature is my inspiration.”

The artist also works on an ongoing project to photograph Mongolia’s last remaining nomadic eagle keepers in hopes of helping preserve their traditions, and he has traveled to a number of other wonderful places across the globe.

More photography of the Chara Sands, and its curiously disparate periphery, taken by Kordan during his expedition: