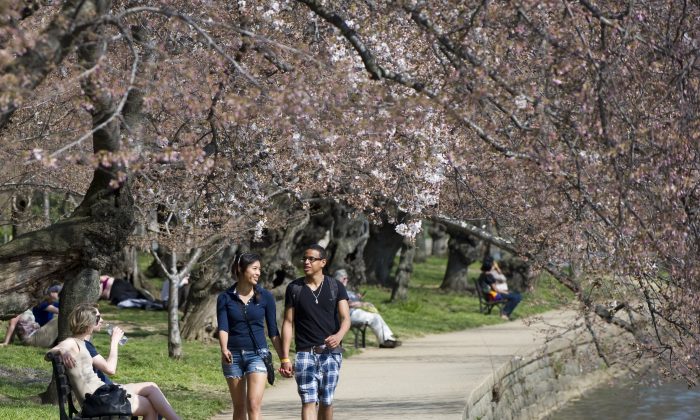 A couple hold hands as they walk beneath cherry blossom trees adjacent to the Tidal Basin on the National Mall in Washington, 2012. (Saul Loeb/AFP/Getty Images)
Mind & Body

Tracing the Bones of a Healthy City

This year, Washington was deemed America’s healthiest city—thanks to a low smoking rate and a strong presence of joggers and cyclists. The American College of Sports Medicine based their ranking on local health-promoting policies, but they missed a critical factor under their feet: a city’s street plan.

According to a study published in the Journal of Transport & Health, disease starts from the ground up. Researchers found that people living in more compact cities are healthier, while those who live in a town with larger lots and wider roads showed more incidents of obesity, diabetes, high blood pressure, and heart disease.

Researchers from Colorado University in Denver (CUD) and the University of Connecticut examined 24 medium-size cities, controlling for typical health metrics such as land use, food environment, socioeconomic status, and air pollution.

They found that the more intersections a city had, the lower the rates of disease.

According to Dr. Wesley Marshall, study co-author and assistant professor of engineering at CUD, the reason for the difference is daily physical activity. For people who live in a city with a more tightly gridded street network, exercise is built into their day.

“These people have the ability to walk or bike to school or the store or to work. But with the other types of communities, it’s almost been engineered out of the equation where you end up living in a place where you have to drive from A to B. If you do want to exercise, you have to drive to the gym or drive to a park to do it,” Marshall said.

In the interest of consistent data, the study only looked at California cities, but evidence for the idea is found in street plans across the country.

Marshall compared street networks to dinosaur bones. “People can hypothesize about how that dinosaur lived: It stood upright, it ate this way, that kind of stuff,” he said. “If you see a map of the city, you see the bones of the street network; you can sort of imagine how the people that live there get around. That seems to be the case with what people are actually doing and how they use these places differently.”

The bones of older cities—such as Washington, D.C., for example, which was inspired by the great cities of Europe—are engineered for foot traffic. These communities are arranged on a pedestrian-friendly scale, just as city planners had done for thousands of years.

In the 20th century, however, city designs changed drastically. The modern city layout called for more multilane roads and huge lots for ample parking. It was designed to make life convenient for drivers, but the pedestrian environment suffered as a result.

“There was no science behind why we did it. It was focused on automobile efficiency. We were trying to get as many cars through a point as possible,” Marshall said.

Even if the transportation system is designed primarily for drivers, newer cities can still take cues from older street plans. For example, Salt Lake City was built on a grid of blocks about four times the size of those found in older cities. Some of Salt Lake’s 10-acre blocks have since been cut with walkways for foot and bike traffic.

Several cities have adopted bike lanes to encourage physical activity and curb car dependence, but Marshall warns that any redesign must consider local conditions. In Orlando, Fla., for example, biking will never be attractive in the hot, humid summer.

Marshall adds that even if the city’s bones change for the better, the local culture still needs time to adjust.

“Cities sometimes think that they can just throw in a facility and things are just going to change overnight. But if you look at cities like Portland, Davis, Berkley, or Boulder, they’ve been doing these things for 20, 30, 40 years,” he said. “It needs to be a long-term vision of what these cities can be like down the line.”