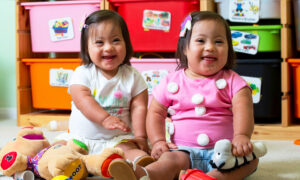 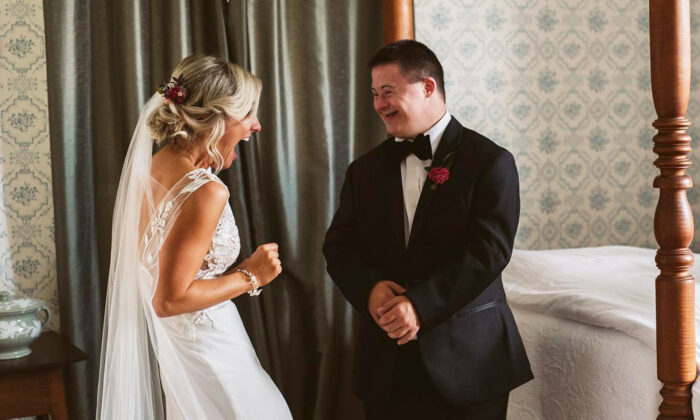 A bride chose to keep the tradition of waiting until her wedding ceremony before letting the groom lay eyes on her in her wedding dress for the first time. She did, however, give her younger brother Nick who has Down syndrome the honors of his “first look” and made into an adorable, emotionally charged photoshoot. The touching pictures went viral and warmed hearts all over the internet.

Ashley Rice, now Ashley Sedar, from Tonawanda, New York, was planning her wedding to Brian Sedar when she decided to arrange the “first-look” photo session on her wedding day. She told Good Morning America that she had always been “intrigued” by the concept.

However, she said that she “had always imagined” her soon-to-be husband only seeing her when walking down the aisle. That’s when a friend suggested she do the first-look photoshoot with her little brother instead, “and it just clicked,” she said.

When Nick first saw his sister at the wedding during the first look, he was “speechless,” Ashley said. However, he soon came to and had the sweetest words for her. “You are the most beautiful person in the world. You are indescribable,” he recalled having told her, per WKTB.

Ashley said she had always had a very close relationship with her brother. She describes him as someone she can always count on. “[He’s] just always there with me, and I can always depend on him. He’s just the best little brother,” she said.

Kelsey Watroba, the owner of Kelsey Gene Photography, was the one who got to capture the moment. “Looking at the photos, you see these two have such a close relationship … I was very glad to have had my big camera to hide my face because I was crying,” she explained.

According to Watroba, she was unprepared to witness such an emotional moment. “Little did I know that this first look would turn out to be one of the sweetest things I have ever witnessed, in my entire career as a photographer,” she added.

The wedding photographer posted the heartwarming set of photos on Facebook, with a caption that read, “… these two carved out a moment to spend together. And it was so special and pure. Nick had some very heartfelt thoughts to share with his sister. When I tell you that there was not a dry eye in the room … oh yes, I was right along with them in tears.” The post went viral and garnered over 14,000 shares on Facebook.

For Ashley, her brother’s Down syndrome hasn’t affected their bond. She actually describes it like any normal relationship between siblings.

“My relationship with Nick is a beautiful one, but also a normal one. I’m his biggest supporter, and we love each other fiercely. But, he is still my little brother, and we do normal things that brothers and sisters do. We bicker, and we annoy each other. We frustrate each other at times, and then the next day, they are forgotten, and we’re back to normal, and that’s normal. At least it is for us,” she said.