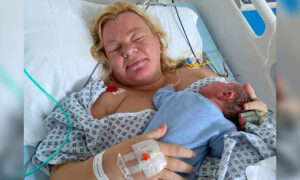 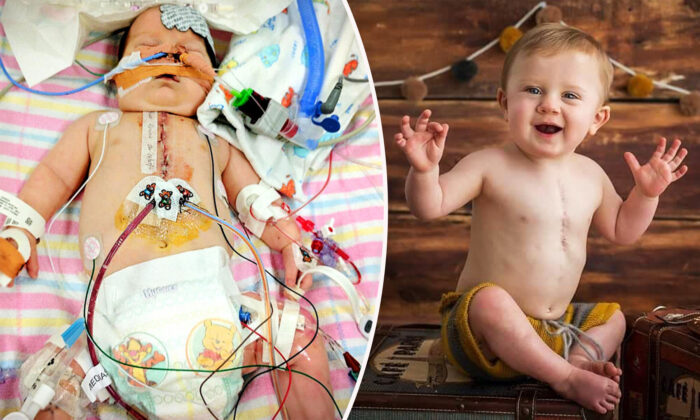 Born with a rare heart defect, Samson Farkas underwent two open-heart surgeries and had clinically died nine times before he was even one year old. But the brave boy survived, and with the love and support of his family, he continues fighting for life.

At the very least, his mother hopes to “give Samson the opportunity to as many days, earth-side, as possible,” she shared with The Epoch Times.

“The older boys have an unbelievable bond with Samson and have also felt a great deal of heartache with [the] traumatic rollercoaster ride our family set on, 3.5 years ago,” she said.

Renee and her partner, Jason Farkas, of Cairns in far north Queensland, Australia, learned at 16 weeks pregnancy with Samson that Renee was at high risk for Edwards syndrome and Down syndrome.

She describes the catastrophic, and miraculous, events that occurred during the pregnancy.

“I stood up and had lost all fluid around the baby,” Renee, who has type 1 diabetes, recalled. “I was sent home with the ‘bag of bears of hope,’ which is given to mothers whose babies pass.”

Yet, four days later, Renee’s waters had reaccumulated. “This in itself said to me, ‘Wow, this kid really wants to be here,’” she marveled.

At 23 weeks, Renee flew to Brisbane, where a team of cardiologists diagnosed Samson with hypoplastic right heart syndrome (HRHS), a rare defect that affects normal blood flow through the heart. He was given a 5 percent chance of survival.

“We were given the option of termination multiple times,” Renee recalled, “but there was no backing down for me; this kid wanted to be here.”

Renee went into labor at 31 weeks. She was “flown with only the clothes on my back” by Australia’s Royal Flying Doctor Service to Brisbane, where baby Samson, weighing 1.6 kilograms (approx. 4.4 pounds), was delivered via emergency cesarean section.

“Samson was born blue and needed to be resuscitated and put on life support,” said Renee. “I wasn’t able to see my little boy until over 32 hours after I had given birth; he was too unstable.”

Brokenhearted, Renee and Jason were asked if they would like to take their baby home to “love him for as long as he survives.”

Samson fought hard over the months that followed. At 14 days old, he caught rhinovirus. He spent 54 days on respiratory support, but by the age of 3 months, he had reached his goal weight.

He received a cardiac catheter but needed to be resuscitated after reacting to the anesthetic. He underwent his first open heart surgery for a shunt, which failed, and then spent nine “long, grueling hours” on a bypass machine.

Samson received donated tissue but lost oxygen during the procedure and began to have seizures. After an MRI, Renee and Jason were told that their son would never walk or talk.

The couple spent Samson’s first 183 days of life in the hospital. Owing to the financial toll, they lost their home in Ravenshoe but relocated to Cairns with the support of family to await another procedure. After the operation, Samson turned 1.

“This was one hell of a celebration,” said Renee.

Today, Samson has only 60 percent oxygen saturation to his blood and exhausts easily, but Renee marvels at his bravery.

Samson loves his brothers, the moon, trains, the beach, and playing doctor. “Through all his battles and daily struggles he still manages to smile,” said Renee, adding, “Our motto is, ‘God only gives his greatest battles to his strongest soldiers,’ and he chose us for a reason.”

Samson continues to defy the odds.

“He is walking and talking,” said Renee. “He has a team of great therapists. He was recently given clearance to attend daycare, [where] he just flourished and absolutely loved seeing all his friends.”

The toddler nonetheless requires further heart surgery; his family is awaiting their doctors’ verdict. “It’s like PTSD,” Renee explained. “I just pray for the best possible outcome, and again, hold onto faith.”

In support of Renee and Jason, a family friend launched a crowdfunding page to help with rent, flights, and accommodation related to Samson’s procedures. The financial help, said Renee, allows her family to remain “emotionally present” for Samson.

“He could live another 20 years or it could all end tomorrow,” Renee told Daily Mail. “It’s a waiting game … if [the next surgery] doesn’t go ahead, doctors say there’s nothing more they can do.”

Renee and Jason maintain a Facebook group, Samson’s Crew FNQ, to chronicle their son’s ongoing journey. “Just sharing his story and having people pray, or emit their positive energy our way, is more than enough for us,” said Renee.