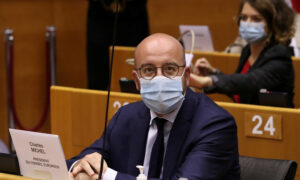 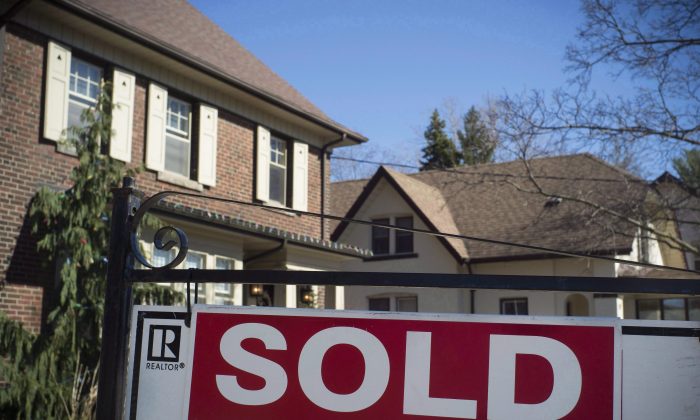 A sold sign is shown in front of a west-end Toronto home. The average price of a home sold in the Toronto area in September 2017 climbed higher on a month-over-month basis for the first time since hitting a record in April. (The Canadian Press/Graeme Roy)
Economies

How quickly things change for Toronto’s housing market. At the start of the year, prices were rising by more than 30 percent annually.

But as was seen in Vancouver, eventually the market wobbles under its own weight. It gets to a point where there aren’t enough buyers capable of paying ridiculous prices.

Then, following the federal government making it harder to get an insured mortgage, the Province of Ontario enacted a slew of measures including a 15 percent foreign buyers tax that had been accelerating the slowdown in Vancouver. Additionally, the Bank of Canada has raised interest rates 0.50 percent since mid-July. Now, the newest threat is the federal regulator, the Office of the Superintendent of Financial Institutions (OSFI), targeting eligibility for uninsured mortgages.

The Toronto Real Estate Board reported on Oct. 4 that September sales were down 35 percent compared to a year ago. The average selling price of $775,546 was up a mere 2.6 percent from September 2016, putting an end to a four-month drop in average sales prices.

With Toronto’s housing market getting hit from all sides, it creates uncertainty with some potentially undesirable dynamics for policy-makers.

A year ago, the minister of finance introduced a mortgage stress test for insured mortgages—buyers must qualify at a rate the greater of their contract rate or the Bank of Canada’s conventional five-year fixed rate (4.89 percent as of Oct. 4).

OSFI proposes that the qualification rate for all uninsured mortgages should be 2 percent added to the contract rate.

Year-to-date, 21 percent of homes were sold for over $1 million. All those transactions would potentially be affected by OSFI’s uninsured mortgage proposal.

However, OSFI has no jurisdiction over credit unions, which are provincially regulated. They may offer a relief valve to borrowers.

“If they [credit unions] allow uninsured borrowers to still qualify at the contract rate instead of that higher stress test rate, you’re absolutely going to see a flow of those mortgages to the credit unions,” McLister said in a phone interview.

While OSFI monitors credit unions and alternative lenders, the smaller financial institutions could thwart its policy.

“The policy as I understand it may actually preclude more people from having access to affordable housing,” said Brad Henderson, president and CEO of Sotheby’s International Realty Canada in a phone interview.

Mortgage rates started rising in June when the Bank of Canada began discussing how the two rate cuts in 2015, to support the economy from falling oil prices, had done their job. According to data from RateSpy.com, the best five-year fixed rate for an uninsured mortgage has gone up by 0.55 percent (from June 1 to Oct. 2). But the best variable rate mortgage has only gone up by 0.18 percent, reflecting better discounts from the prime rate.

Variable rate mortgages are now en vogue after a period in which fixed-rate mortgages were flying off the shelves as borrowers rushed to lock in a rate after the September rate hike. McLister says that for insured mortgages, a borrower can get prime less 1.2 percent, an all-time record discount.

This reflects marketplace competition and a lender’s desire to offset the amount of fixed-rate mortgages on the books. Also, major banks built up some margin as they only lowered prime 0.30 percent as the Bank of Canada cut its policy rate 0.50 percent. So now they can afford to be more aggressive.

But as people pile in to variable-rate mortgages in a rising-rate environment, more people face increasing mortgage payments, which provides clear justification for qualification at a higher rate.

Expectations are for another rate hike in 2017 and up to three more in 2018; however, the Bank of Canada may be changing its tune slightly.

“There is reason to think that interest rate increases may have more of an impact on the economy and inflation than they did in the past,” said Bank of Canada governor Stephen Poloz in St. John’s on Sept. 27. High levels of household debt combined with government measures to cool the housing market have clouded the market’s outlook, which still benefits from a strong economy and fundamentals.

Toronto’s housing affordability has never been this bad, according to RBC. For the second quarter, even with prices starting to come down, the median pre-tax income needed to pay a mortgage, property taxes, and utilities for housing in Toronto was at an all-time high. The bad news is that rising interest rates will offset the relief of falling prices.

As a rough rule of thumb, McLister says for every 1 percent rise in rates, a buyer can afford 8.5 to 9 percent less house. For the 0.50 percent in rate hikes and considering median incomes and debt loads, “look for a house that is $25,000 cheaper,” McLister said.

In uncertain times, the high end of the market sees fewer transactions as wealthier buyers and sellers are apt to wait. But at the lower price ranges, the less wealthy typically still have to transact.

The most expensive segment of the market—detached homes—made up a smaller share of sales this September compared to last. At the lower price points, the condo market remains hot with prices up over 20 percent from last year.

“I’m not a pure optimist, but by the same token I’m not an alarmist because people have been calling the end of this market for the last three years,” Henderson said.

“It really comes down to the psychology of the market and the comfort that people have in the future.”