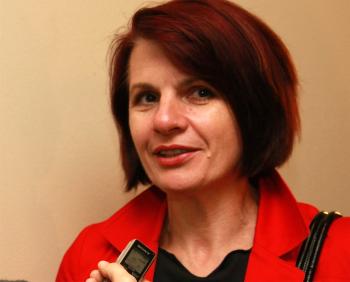 TORONTO—Actress Radmila Micic, well known in Toronto’s Serbian community for her efforts to raise money for child victims of war, described the final Toronto showing of the Mid-Autumn Spectacular as “an amazing experience.”

“I really liked the show. I think it’s a great opportunity for people that don’t have [a] Chinese background to see what the other parts of the world are doing and how they maintain and treasure their heritage,” said Mrs. Micic.

Mrs. Micic, who attended the show with her husband, added that this was the couple’s first time “coming out to something totally different.”

Mrs. Micic said her fascination with Chinese culture began a long time ago.

“When I was younger I used to read about ancient Chinese culture and heritage and lifestyle. That was also something encouraging me to come see what was actually on the stage; how they portray that culture. It’s amazing, a truly unique experience for me. I’m so pleased we came,” she said.

Mrs. Micic is actively involved in theatre. As a way to raise funds to help children who have been impacted by war, she and her husband perform monologues, mono comedies and tragic pieces from Serbian history.

She said she was impressed with the graceful body movements and the elegant posture of the DPA dancers. She also commented on the acts in the Spectacular that depict abuses against practitioners of Falun Gong in China. Falun Gong is a spiritual discipline rooted in Chinese culture that is currently being brutally suppressed by the Chinese regime.

“That was also an excellent thing that we were shown, how some regimes do not allow the freedom of even thinking, never mind anything else, and I’m so glad to see that, expanding my horizons,” she said.

“I do have some knowledge but at this point it’s great that I can see a scene right on the stage, what’s really going on. I’m so thrilled we are here, it’s amazing.”

The Mid-Autumn Festival is one of China’s most ancient and cherished holidays. The Spectacular expresses Chinese classical dance and showcases authentic traditional Chinese culture. Through background scenery, costumes, and choreography, the Spectacular expresses truthfulness, compassion, and pure beauty. China’s history comes to life in this gorgeous performance that is entertaining, inspiring, and uplifting. The show’s content is presented in both Chinese and English. For more information, visit DivineShows.com/Toronto .