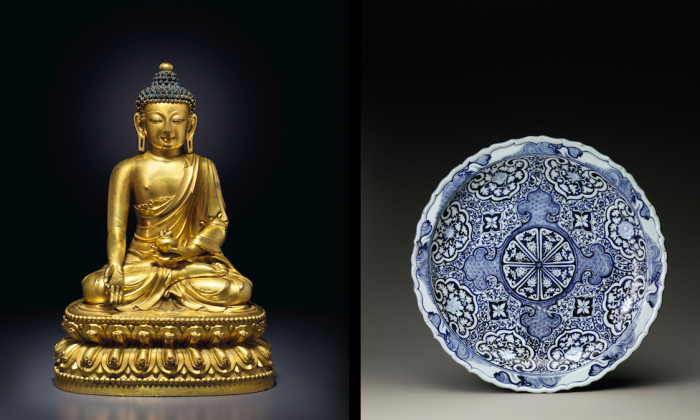 (L) A Ming Dynasty gilt-bronze seated figure of the Medicine Buddha, sold at Christie's "Asian Masterpieces of Devotion" sale for $5,541,000. (Courtesy of Christie's) (R) A Yuan Dynasty blue and white plate that sold at Sotheby's for $4,197,000. (Courtesy of Sotheby's)
Art Marketplace

All prices below include buyer’s premium.

The Sublime and the Beautiful: Asian Masterpieces of Devotion—A Ming Dynasty gilded bronze figure of the Medicine Buddha sold for $5,541,000, above the estimate of $2 million–$3 million.

Indian and Southeast Asian Art—A 13th–14th Century Nepalese copper figure of Avalokitesvara sold for $2,045,000. The next highest selling lot was a nagaraja figure from Tibet’s lost Densatil monastery, for $617,000.

Fine Chinese Ceramics and Works of Art—The top lot was a rare celadon-glazed relief-decorated archaistic vase from the Qianlong period. It sold to a private U.S. buyer for $1,445,000, well above the estimate of $600,000–800,000.

Fine Chinese Paintings—Bada Shanren “Pine Tree” was the sale’s top-selling lot for $233,000. The next highest selling lot was “Tigers” by Zhang Shanzi and Zhang Daqian for $125,000.

Indian, Himalayan & Southeast Asian Works of Art—A gilt copper Tara figure sold for $1,025,000. The next two high selling lots were in the $200,000 range: a grey schist standing Buddha, and a thangka depicting Phagmodrupa with his previous lives and lineage.

Chinese Art from the Scholar’s Studio—An informal portrait of the Daoguang Emperor sold for $389,000.