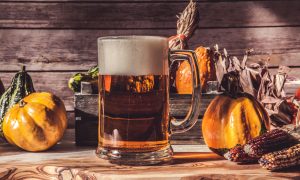 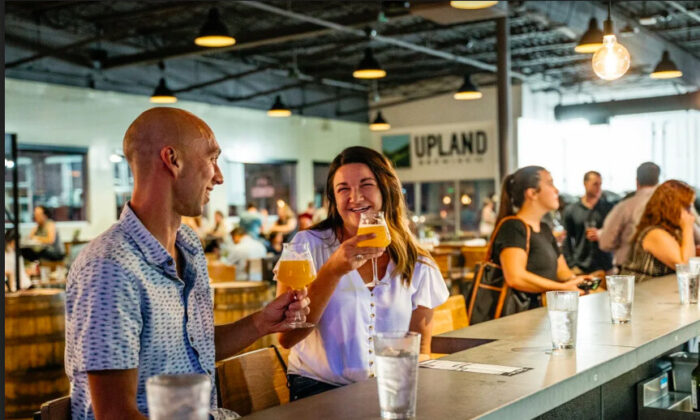 Inspired by the creativity of their Fountain Square neighbors, Upland FSQ features a small-batch brewery for tinkering and barrel-aging, 22 beers on tap, a beautiful outdoor patio, and a locally-focused menu of spirited pub classics and vegetarian cuisine. (Cliff Ritchey/Visit Indy)
Destinations

I spent the weekend of Veterans Day in Indianapolis. Outside of D.C., it’s actually home to more memorials than any other city in the U.S. That’s 46, including a special World War Memorial, honors to the crew of the USS Indianapolis, and “Shining a Light,” a nightly sound and light show projected on the Soldiers & Sailors Monument in the heart of downtown. As the holiday fell on a Monday, it made a perfect three-day weekend, and in honor of those who served, I found Indianapolis a pretty good place to raise a pint.

Sun King Brewery was the first production brewery since the 1940s when it started shipping beer in 2009, and the taproom at their downtown location sits right alongside the brewing. A stop here is vital on any craft beer visit to Indy.

Four of their five core beers are under 6 percent alcohol by volume, and in fact, their Mexican-style lager Pachanga checks in at 4.2 percent, making it quite sessionable. But visitors will want to try out the many limited brews among the 26 taps, not a few of which are sour varieties. Of those, try Cherry Busey, a Flanders-style Oud Bruin Ale aged 16 months in wine barrels with Montmorency cherries. It’s won awards at the Great American Beer Festival and for good reason. The West Coast-style pale ale Osiris is a good choice, but the hops averse might prefer the Scotch-style ale, Wee Mac. The bourbon-barrel aged beers are excellent.

Free off-street parking is a bonus.

Painted on the brick wall of this repurposed livery is a skull sporting a top hat marking Taxman Brewing’s new CityWay location. Two of the founders lived in Brussels for a time and the interior space does call to mind the brewhouses of Belgium. House beers include a Dubbel, Tripel, and Quadrupel, and while you can find a few hoppy options, they too are Belgian. Fruited versions, lambics, and barrel-aged varieties are all on offer.

Take home a couple of bottles to age a bit.

Eat here: While so many ingredients are regionally sourced, their mussels round off the Belgian experience, served along with perfectly done frites—double fried in pork fat. In season the beer garden is nice.

My first impression as I walked into Metazoa Brewing was roaming cats and a killer collection of cone-top beer cans. A chain-link fence set the brewers apart from the drinkers. But take note: the brewmaster previously mastered at Goose Island and 5 Rabbit Cerveceria in Chicago. Hoppopotamus, an American IPA, is an easy-drinking, citrusy favorite, and there is a nice balance among hoppy, light, and malty options. Plus, there are cats to pet.

Just over a year after opening in 2014, Chilly Water Brewing on Virginia Avenue (a block south of foodie favorite Bluebeard) took Best in Show, Brewery of the Year, and Grand Champion Brewery of the Year at the Indiana Brewers’ Cup.

The walls are adorned with 45s and classic LP album covers, while many of the beer names are plays on rock-related titles and groups. The brewery name itself is from a Widespread Panic song, and the owner’s collection of Grateful Dead show tickets is framed on the wall. Blood on the Tracks Blood Orange IPA has a strong juice presence, and Coconut Porter, a popular brew, features chocolate and coconut like a Mounds bar. Smoke on the Lager is an award-winning German-style Rauchbier.

A short menu offers some burgers and sandwiches—the Mama Cass with ham, bacon, and Swiss on sourdough—and appetizers: the Toni Basil pesto-hummus blend is as clever as its name. “So fun it’ll blow your mind” is its tagline, borrowed from Basil’s one big hit in the ‘80s.

Farther south on Virginia Avenue, find Fountain Square, a neighborhood southeast of downtown with a history dating back to 1835 when it was first laid out for residences. It grew as a commercial area in the late 19th century and eventually became the theater district. But economic decline wore it down in the 1950s. The theaters closed and even the namesake fountain left for another park. Fortunately, investment and re-development starting in the late 1990s turned it into the hip and happening place it is now, with a growing community of indie restaurants, shops, galleries, music venues, and, of course, taprooms.

Bloomington-based Upland Brewing opened a new location in summer 2019 in Fountain Square: a small-batch brewery for special limited brews and barrel-aging, especially sour varieties. Food is locally-focused, 22 beers are on tap, and both the double-bar taproom and outdoor patio are dog-friendly. Staples such as Dragonfly IPA and Champagne Velvet Pilsener can be combined with a couple of current specialty brews for a taster flight.

A bit of an international sensation, Scotland’s BrewDog moved into the U.S. market with locations in Columbus, Ohio, including their very own hotel. Their next step was Indy, and their spacious taproom lies a block away, right between Upland Brewing and a notable locally based brewer. Fountain Square Brewery operates in an old industrial building. A glass utility door separates the production area from a funky taproom worthy of the artsy vibe of the neighborhood, with repurposed corrugated zinc sheets on the ceiling, and beer art on the walls. Try the Workingman’s Pilsner or Backyard Porter.

St. Joseph Brewery occupies a former Catholic church—the 1880 structure how has a brewhouse where the altar would have been. The central space features table seating, four large TVs for sports, and a bar serving from 16 taps. Confessional IPA is a winner, and the Popemeal Oat Stout is smooth and delicious. Descendent Dubbel is a nod to the Belgian monks, surely. Food includes upscale entrees along with sandwiches, salads, and appetizers, and their Sunday brunch is popular.

I am a sucker for both puns and literature, so anything named Books & Brews is going to get my attention. Combined with a bookstore, this brewery has turned book spines into tap handles to serve Nancy Brew, Cream and Punishment (cream ale), or Charlie and the Chocolate Stout. The puns may pain some but the beer is delicious. While the original mothership location is up on the north side they have others, including the Mass Ave. location a few blocks from St. Joseph Brewery. Stop in for a pint and a paperback.

Many more breweries around town are worth checking out, but this should get you started. One final beery recommendation is the Slippery Noodle Inn. This is the oldest bar in Indiana and an excellent live music venue, heavy on the blues. If you are lucky, you can get a tour of the building, which seems cobbled together, from the subterranean ghost cellars up to the former brothel rooms above. A lot of characters have passed through here. Some of them never left. The house beer, Dis Is It—a nod to the Blues Brothers and the pub’s mantra—is a nicely balanced IPA brewed by Metazoa. It’s a great place to end the night.

Hyatt Place downtown is across the street from the home arena for the Pacers and a short walk from a Colts game at Lucas Oil Stadium. Taxman is around the corner, and all the breweries mentioned here are minutes away by car or rental bicycle—or even no more than 20–30 minutes walking.

My favorite spot in town is the highly creative and unpretentious Milktooth, good for breakfast and brunch, and located on Virginia a short distance from several breweries. Hedge Row is another fine choice on Mass Ave. Try the pork belly skewers or the tuna ceviche at lunch, or come back for dinner for bigger plates, many of them involving their wood-fired oven.