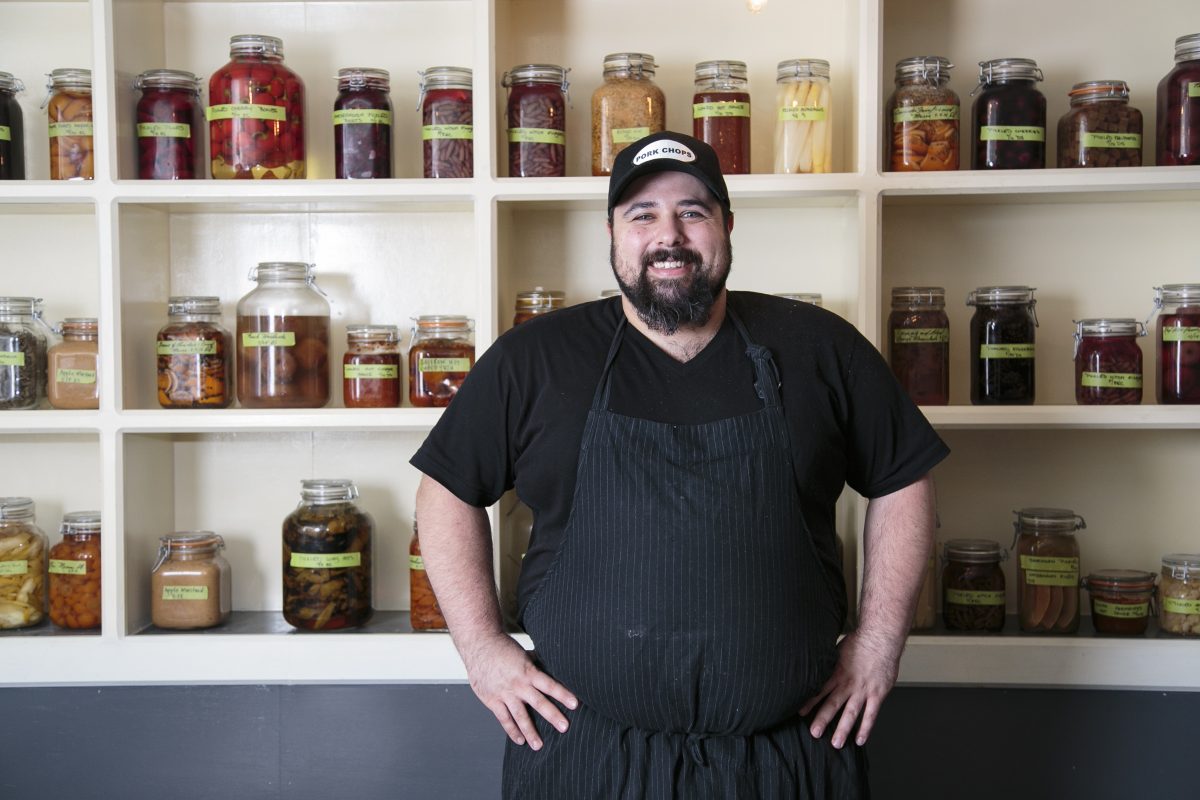 It’s time to feed Stu. He’s been waiting all day even though, by all appearances, he looks stuffed to the brim already.

Still he’ll eat anything and everything he’s given, from tilefish head bigger than your own to shrimp shells.

Stu is a stew. A perpetual stew.

Chef Dave Santos from the West Village restaurant Louro created it as a way to make the most of leftover trimmings.

“Stu has been working hard since August,” Santos said. He corrected himself and chuckled, “Or working very gently,” Santos chuckled. It’s only taken off the heat to be strained every two days (or as sous chef Emily Chapman puts it, “It’s really rare that you see Stu naked.”).

It not only feeds Louro’s staff every day, who Santos says hasn’t gotten sick all year, but also offers a rich, flavorful base for anything from garlic soup to ramen, to lobster chawanmushi (a Japanese egg custard).

Stu is but one of about 200 projects that Santos is cooking up, or smoking, or fermenting, at any given time at Louro (and the only one with its own entertaining Twitter feed (@perpetual_stew, for ye curious).

The jars that line the shelves up to the ceiling not only capture the best of the season, like Maine blueberries from two years ago (“They were out-of-control good,” Santos said) or last June’s excellent white asparagus, but also experiments that make chefs fantasize.

“When I have guest chefs in here, when they walk past this, they say, ‘What? Are you kidding me?’ Their brains just start going crazy. The thing with us chefs is, for most of us, we’ve used just about everything as far as ingredients go. When you have an opportunity to use Sichuan pickled watermelon rinds for the first time, that’s exciting,” Santos said.

Raising animals, growing food, fishing, butchering, and making wine are skills Santos learned from his Portuguese immigrant parents in New Jersey. At the age 4 or 5 he was already fishing with the adults in the family.

His sister used to tease their mother that they didn’t grow up like a normal American family. “None of my friends woke up in the morning to their father, mother, and brother hand-stuffing sausages in the middle of the kitchen,” she would say.

At Louro, Santos marries those homegrown skills with formal experience gained in restaurant kitchens, including Per Se and Bouley.

The cuisine is New American, so you’ll find influences from all over the globe, while some dishes show an outright Portuguese influence.

For example, diners are greeted with bread and a humble little bowl of “Portuguese butter.” It is amazing stuff, made of lard, olive oil, duck fat, and various herbs and spices including black pepper, which gives it a dark hue.

Add it to the list of foods to be jarred. Santos should also stick a price tag on it and sell it.

The Piri Piri Shrimp was—improbable as it might sound—even more addicting. I temporarily left the Portuguese butter alone and put the focaccia in the service of wiping clean the piri piri oil left behind by the shrimp, as it wouldn’t have been proper to lick the plate clean—but boy was I tempted ($8).

There are different Portuguese regional takes on piri piri, but Santos swears by the one he grew up with, from the Alentejo area. It’s simple—mostly garlic, olive oil, piri piri peppers, red wine vinegar, and herbs—and incredibly flavorful.

His take on a Portuguese classic of pork and clams features braised pork shoulder topped with crackling skin garnished with clams, and is both tender and crispy, savory and smoky ($35).

Santos mentioned he would like to open a Portuguese restaurant one day that offers a true representation of the country’s cooking. That would be exciting to see.

Louro is much more encompassing, all while experimenting constantly. Besides a few dishes that stay on the menu year-round, it never settles into a staid routine. The majority of the menu is an adventure.

Kimchi Fried Rice, with calamari, mussels, clams, and shrimp, comes sizzling in a cast iron pan for diners to crack a duck egg into. But the kimchi, rather than bearing the colors of red chili powder, is made with a Portuguese accent: roasted red pepper puree, garlic, black pepper, piri piri peppers, and, instead of Napa cabbage, kale and Brussels sprouts. But all the same, it bears a similarly comforting quality, and it’s delicious ($16).

Did it bother me that the spices used weren’t Korean? Not a bit. But Santos said it does sometimes get him into trouble because of diners’ expectations.

I came to understood that when I tried the Octopus Bolognese ($27), which looks exactly like a traditional Bolognese. I bit into it carrying all the expectations of tasting traditional Bolognese flavors, but what I tasted was the ocean. Some diners love it—Santos hasn’t been able to take it off the menu because of the demand.

A dry-aged lamb meatball looked like any other meatball, but had a funkiness that was beyond what I could handle ($24). It too has its fans.

The experiments pay off, though. Santos carries boundless enthusiasm and energy, and the highs are high.

Santos’s range is wide, and he is too curious to be limited to the same menu items over and over again.

What you do get are dishes like celery root perfumed from having been cooked in hay, sweet and refreshing ($10–$13). Or Idaho brook trout over farro, wild rice, and spinach, perfectly pan-fried and so good that if you close you eyes, it transports you over river and woods ($27).

That exuberance and curiosity are uncommon, and makes Louro a worthy visit.