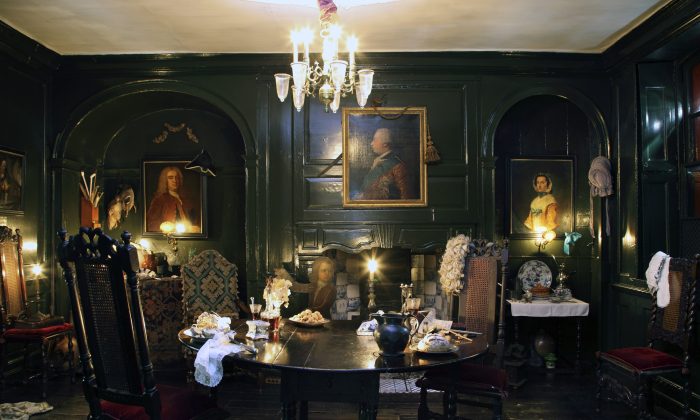 Dennis Severs’ House at 18 Folgate Street in East London is a strange time slip experience. It’s an oasis nestled in the ever-growing steel and glass structures springing up in Spitalfields.

In 1979, the American artist Dennis Severs created a three-dimensional tapestry of the rise and fall of silk weaving life within a Georgian house. Life inside is set between 1724 and 1914. The fictional Huguenot silk-weaving Jervis family depicted in the house aren’t there. But I did feel like they heard me come in, imagining they were alerted to my presence by the creaky floorboards. Rooms are abruptly left in disarray with beds unmade, tobacco spilt, and half-empty cups of tea.

I led myself on a silent tour, slipping through history in the space of 10 candlelit rooms. Accompanying me was an atmospheric soundscape of chiming clocks, rifle-fire, and the echo of distant voices. My nose was filled with the scent of musty wigs, sweet-smelling herbs, and open-hearthed fires as I trespassed between rooms.

In the master bedroom, inhabited by Dennis Severs when he was alive, his brogues remain. Spanning the walls stands a magnificent shrine to china vases, a vast collection arranged in symmetry on the mantelpiece rising up the wall on individual golden shelves. In front of a dressing screen lies a silk dress mid-fix with instructions to “Let out here”, perhaps owing to a lady’s expanding waistline from living the high life. The motto of the house tells us: “You either see it or you don’t.”

There is a common thread of taxidermy manifesting throughout the house. Examples from the stuffed animal menagerie include a rabbit ready to cook in the kitchen and a canary mid-tweet in a birdcage. When I entered the derelict top floor lodgings, I was met by the gaze of a black cat. Incredibly lifelike, I thought, and although fairly still, the cat’s eyes blinking gave away that it was alive.

This festering top floor cobwebbed room is a sad place, reflecting the collapse of the silk trade. Sounds of rifles firing off in the distance can be heard resonating around the room, making me wonder if I should peak through the window to see who was getting shot. Next to the window stands a scruffy Charles Dickens writing desk, displaying a portrait of the prolific writer: a hope to aspire to his standards.

A letter on the table informs the reader about the death of childless King William IV in 1837, succeeded by Victoria his niece and the birth of the Victorian Age. Downstairs is the Victorian Parlour, an almost overwhelming homage, displaying all things from this era.

Dennis Severs (1948–1999) called being thrust into his house installation a “still-life drama”.

For more information about visiting Dennis Severs’ House see the