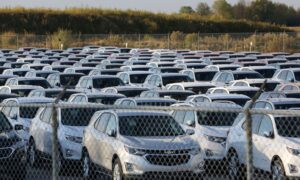 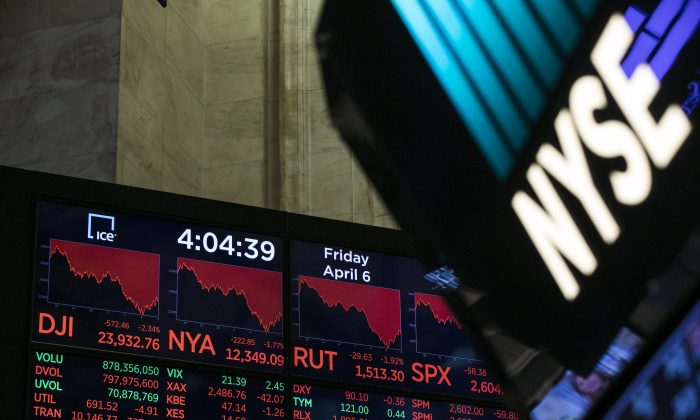 A monitor displays the day's final numbers after the closing bell at the New York Stock Exchange on April 6, 2018. The Dow was down by more than 550 points, rattled by concerns of a possible trade war between the U.S. and China. (Drew Angerer/Getty Images)
Markets

Time for Stock Market to Refocus on Earnings

Earnings season couldn’t be coming at a better time for the stock market. With it being tossed around like a boat in the Bering Sea, focus needs to return to fundamentals. Investors expect to be assuaged that earnings for the first quarter of 2018 are growing robustly with a boost from the outsized tax cuts enacted in December.

After 2017, investors might have forgotten what volatility felt like. After the stock market’s peak on Jan. 26, the VIX, the so-called fear index in the market, has essentially doubled.

Since its peak, the S&P 500 is down 8 percent as of April 11. The Dow has seen several multi-hundred-point swings for a couple of months now, but these moves are not due to changing U.S. Federal Reserve expectations or economic prospects.

Three things have been contributing to the volatility, according to RBC Wealth Management’s Alan Robinson: fears of a global trade war, concerns over inflation and building wage pressures in the United States, and regulatory headwinds in tech’s future after the Facebook data scandal.

But these factors aren’t crimping the first-quarter earnings outlook, and RBC is expecting 18 percent year-over-year growth—9 percent is organic growth, 7 percent is the boost from the tax cuts, and 2 percent comes from share buybacks.

“If you strip out the extraordinary items and just focus on that 9 percent organic growth, that’s pretty good,” Robinson said in a phone interview. “It’s commensurate with the leading indicators. It also plays to this idea that we expect the stock market to be up 8 percent for the year.”

Goldman Sachs’ chief U.S. equity strategist David Kostin has a year-end target of 2,850 and said in a note to clients, “Trade tensions represent a minimal risk to S&P 500 earnings in aggregate.”

The focus of a company’s operations doesn’t necessarily have to be on finding a “place to hide” in the case of a trade war. Robinson said RBC sees earnings growing at roughly the same rate for domestically focused U.S. companies and internationally focused ones.

J.P. Morgan notes that sanctions are still a fraction of imports in relation to GDP and that trade policy, for the moment, is more theatre than reality. It’s negotiating tactics and posturing, but it’s certainly driving short-term volatility.

Threats of a trade war are not good for market sentiment, but so far it doesn’t appear to be affecting fundamentals.

More ‘Goldilocks’ for US Stocks

“[There’s] room for the U.S. economy to beat to the upside,” said Blackrock Canada’s chief investment strategist Kurt Reiman in an interview with BNN. However, he says the range of possible outcomes is now wider given the potential for trade tariffs and fiscal policy raising inflation, which could force the Fed to raise rates faster.

Reiman is upbeat on the U.S. earnings. “We recently raised our exposure to the U.S. because of that outsized earnings growth,” he said.

The Fed’s rate hike regime is of less concern to markets, said Robinson, since the central bank has telegraphed its intentions quite clearly and rates will still be stimulative for some time.

“We are still in the phase of removing accommodation rather than actively tightening rates beyond the equilibrium level,” Robinson said.

Markets expect another two rate hikes this year and as long as the Fed stays within one rate hike of that projection, “We should be OK,” said Robinson.

“High net worth investors really only worry about one thing fundamentally when it comes to their investments and that’s whether we’re approaching a recession or not,” Robinson said. And a recession looks highly unlikely in the next six to nine months, he added.

The modest rise in inter-bank lending rates is not pointing to stress in the loan market, and corporate bond spreads haven’t moved wider due to broad concerns about credit, said Robinson.

“I would generally characterize this as a market where high net worth investors are selectively looking to put more money to work on this pullback rather than reassessing their investment strategy in a wholesale manner,” Robinson said.