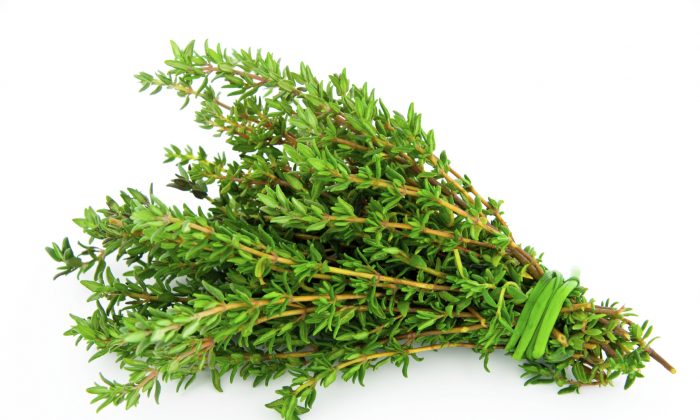 The herb thyme has been a culinary favorite for many generations, but it was once a top choice in European folk medicine for treating a wide variety of health issues.

Thyme is a name that is tempting to pun, but no one is quite sure where it comes from. Some say it originates from an ancient Greek word, “thumus,” meaning courage. Others say it comes from an Egyptian word, “tham,” meaning fragrant. Both interpretations point to key qualities of this herb.

Thyme, a short shrub native to southern Europe, features some of the tiniest leaves in the garden. Despite its small stature, tiny thyme has served as a symbol for strength and bravery among many cultures for thousands of years.

Since the ancient Greeks, thyme has been used to overcome fear and adversity. For cultures from the Scots to the Romans, thyme was used to relieve depression, cure the shy, and bolster courage. During the Renaissance, stuffing a bit of thyme beneath a pillow was a remedy for nightmares. Throughout Europe, this herb was also placed in coffins to help the dead cross over into the afterlife.

You rarely hear about thyme’s courageous reputation these days, but several medicinal applications endure. Aside from cooking, the best-known use for thyme is to treat coughs and congestion. Thyme breaks up phlegm and helps clear the chest and head. It is approved by Germany’s Commission E (a government agency that evaluates herbal medicine) for bronchitis, whooping cough, and other upper-respiratory infections.

According to the Ricola website, thyme is the “strongest pick” among the 10 herbs in the company’s famous cough drop formula.

Many cultures burned bundles of dried thyme as a purifying incense, both in temples and in the home. The fragrance is pleasant, but bitter and earthy.

The scent of thyme was once believed to ward off evil spirits. According to one ancient Roman physician, thyme “puts to flight all venomous creatures.”

Today we know that thyme contains phytochemicals that guard against infection. Thyme has been shown to kill bacteria, fungal and yeast infections, as well as parasites such as hookworm and roundworm.

Like other plants in the mint family, thyme is rich in essential oils—the source of the plant’s scent and medicinal power.

The first recorded use of thyme comes from the ancient Sumerians, who used the herb as an antiseptic. The Egyptians used thyme in their mummification formula. Several Roman emperors chewed thyme following a meal with the belief that it would protect them from poisonings. In Victorian times, nurses washed bandages in thyme water to disinfect them.

Thyme’s microbe-fighting ability also explains why the herb has long been used to preserve food.

Thyme oil (thymol) has remained a key ingredient in Listerine mouthwash since 1879 because, as the ad says, it “kills the germs that cause bad breath.”

You might not think a common kitchen herb would make much of a pain reliever, but according to English herbalist John Gerard, thyme could cure sciatica and headaches. Thyme has long been used as an oral anesthetic (some say it works better than clove), and thyme oil was used as recently as World War I to treat battle wounds.

Modern research continues to validate thyme’s pain-relieving reputation. A 2014 study in the Caspian Journal of Internal Medicine found that thyme essential oil was just as effective at treating menstrual cramps as the drug ibuprofen and even more effective over time. The study’s ibuprofen group reported that the drug didn’t work as well in the second month of use, while the thyme group said the oil provided even more pain relief the second time around.

Thyme is such a popular herb in the kitchen because it goes with pretty much anything. But it is also bitter and spicy, so don’t overdo it. Thyme not only imparts a pleasant flavor, but like other mints, it also benefits digestion.

To cook with the fresh herb, throw in the whole spring—twig and all—and fish out the stems before serving. Tying the thyme stems together before tossing it into the pot makes stem removal a lot easier.

For more medicinal applications, thyme tea is a good choice. Consider Hippocrates’s recipe: “Boil in one pound of water [about 2 cups], three tablespoons of thyme and leave it in the water for 10 minutes. Drink two glasses per day to cure bronchitis.”

Hippocrates doesn’t mention this, but it’s best to leave the pot covered while the thyme steeps to preserve its essential oils.

Pure thyme essential oil is also available in either red or white. Red thyme oil is stronger and more expensive, but is also more likely to cause skin irritation. The white is more refined. Both should be used sparingly and never in pregnancy. Dilute with a carrier oil (coconut or almond) for topical use, and don’t take internally unless you’re working with a qualified practitioner.

The safest way to use essential oils is with a diffusor. Try a whiff of thyme when your courage is running low.