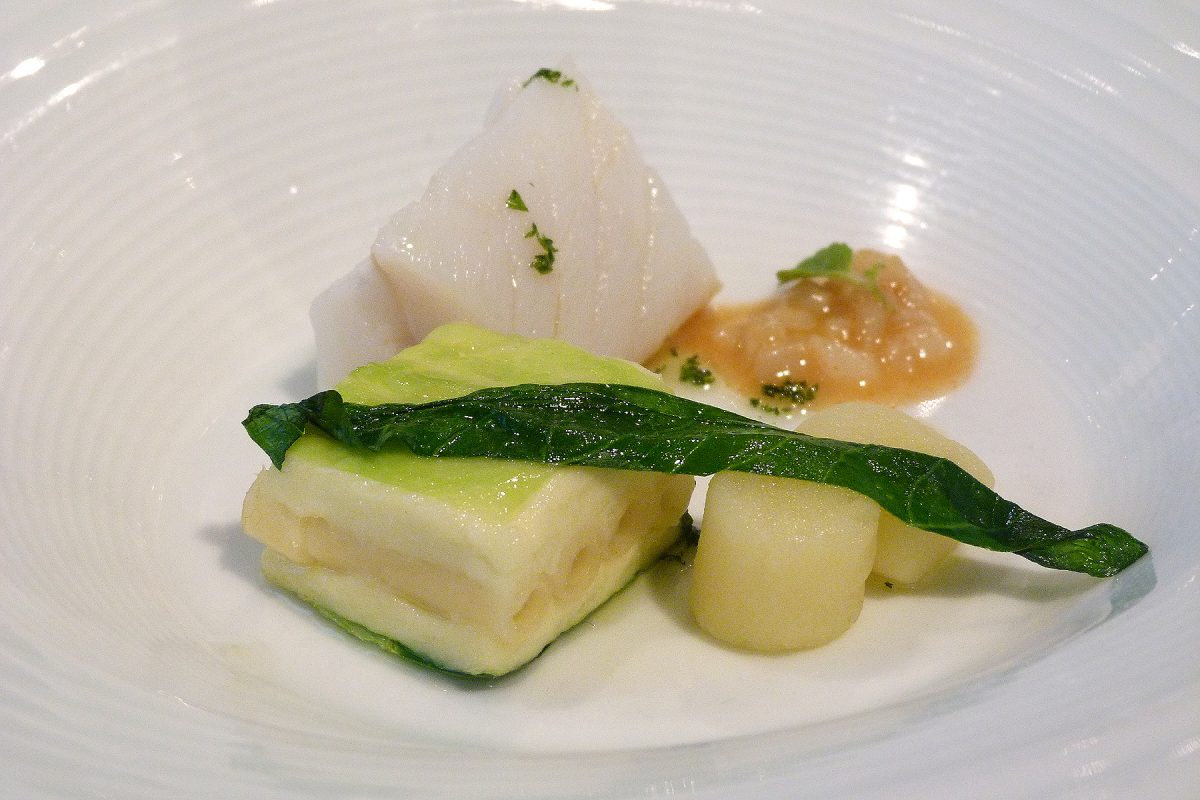 Just over an hour north of Barcelona, in the small town of Girona, the three Michelin stars garnered by the restaurant El Celler de Can Roca are well deserved.

This is a restaurant that, after the closure of Ferran Adrià’s elBulli, is considered by gastronomes as the best place to eat in the world (when elBulli was open, it was considered the second best), and certainly we had there the best lunch during my trip to taste the wines of Catalunya.

I live near New York City and have been lucky enough to have eaten in many world class restaurants, but this meal was on a totally different level. The difference was very subtle, but from the moment you walk in through the front door you understand that this is all about the connection of food, wine, and the environment. Between the décor and the food, it is one of the truly great restaurants.

The passion for cooking and hospitality shared by the three Roca brothers is very evident. Joan Roca is the chef de cuisine, Jordi Roca is the pâtissier, and Josep Roca runs the front of the house and an amazing wine cellar.

The food is playful rather than serious—caramelized olives are brought to the table hanging from a bonsai olive tree—and Catalan ingredients are given center stage billing. The wines paired with the menu were all from local Catalan DOs—Cava, Empordà, Terra Alta, Conca de Barberà, Montsant—and were representative products of our hosts. Catalonia is regarded as distinct from Spain’s other wine-growing regions because of the versatility of its wine styles.

The opening “appetizers” were inspired from foods from around the world: Mexico, Peru, Lebanon, Morocco, and Korea. A paper-lantern-like construct on a tree-stump was placed in front of every plate and when the time came, waiters opened the lanterns simultaneously. Little balls, set on wire rings, contained the tastes represented by the above mentioned countries—St. George’s Mushrooms, Calamari Rings, Marinated Mussels, and Campari Bonbon.

These were paired with a lovely sparkler, the 2007 Cava Gran Reserva from Jané Ventura; a top cava producer. The Campari bonbons, which resembled a miniature water balloon, unleashed a flood of zesty orange-flavored liquid and the Calamari Ring released a definitively Asian salty and fish-tasting flavor.

The next dish was oysters paired with Agustí Torello’s 2006 Kripta Gran Reserva Cava. The Kripta bottle is unusually shaped like an ancient amphora (double-handled wine jug); that means that you cannot rest a full or half full open bottle on the table, without an “ancient amphora base.” Since amphora bases have not been produced since antiquity, it connotes that the cava has to be finished before the host puts the bottle down.

The oysters were accompanied by apple compote, ginger, pineapple and lemon confit, and spices. I don’t really like raw oysters but that was closer to a ceviche, and was delicious.

Next came sole with olive oil, fennel, bergamot, orange, pine nuts, and green olives. Slightly grilled on a charcoal grill, the dish was opaque enough to indicate that the fish was properly cooked yet translucent enough to keep the sea aromas of extremely fresh fish.

The next dish was also a sea inspired delicacy. Cod pot-au-feu, potato gnocchi, cabbage and brandade terrine, and cod tripe.

The dishes were paired with two excellent whites, a 2009 Edetària Blanc from Terra Alta and from Vinya d’ Olivardots the 2010 Gresa Blanc from Empordà.

The Edetària is elegant and very expressive with a marked mineral character, made from garnacha blanca and macabeo old vines planted more than 60 years ago. The Gresa Blanc is made from one-third white grenache, one-third gray grenache and one-third white carignan. All are from old vines—80 and 110 years old—grown on a gravelly, sandy soil. Part of the wine is fermented and aged for eight months in 500 liter new French oak barrels on the lees. The remaining wine is vinified in stainless steal at controlled low temperature and then blended with the oaked wine. Both wines paired beautifully with the fish.

A European lobster parmentier with black trumpet mushrooms was paired with a 2008 Miguel Torres Milmanda from Penedès’ Conca de Barberà. It is a rather young, buttery, and toasty chardonnay, with a long mineral finish.

The final course was Iberian suckling pig with watermelon, orange, and beetroot. Another unusual dish that combined the tastes of crispy piglet skin, silky tender flesh, and garnishes that looked like miniature plum tomatoes but were actually constructs of watermelon flesh, orange-flavored liquid, and beetroot.

Roig Parals Camí de Cormes from Empordà-Costa Brava was paired with the pork and was a worthy accompaniment. It is 100 percent Samsó (the local name for carignan) from very old vines. It has a wonderful palate of dark cherry fruit with well-defined citrus and orange rind on the slightly acidic finish.

With espresso, came milk caramels, sheep’s milk yogurt and sheep’s milk cheese foam and was accompanied by Falset’s 2009 Marça Etim Verema Tardana. It has ruby red color with an orange/yellow rim. The aromas are of fruit jam, raisins, and dried figs, as well as cocoa and dark chocolate. It is sweet on the palate and reminds of a much lighter version of a Pedro Ximénez based sherry.

Out of curiosity we asked for the wine list. A good sized piece of furniture was rolled over near the table, and four giant tomes (Sparkling Wines, Whites, Reds, and Sweet Wines) were given to those interested to see what the cellar has available. The quality and diversity of the bottles, from all over the world, was mind-boggling. Long verticals of many distinguished brands both local and international were there for the asking. And all things considered, the prices were quite logical.

My congratulations to the Associacio Vinicola Catalana, our hosts, and to Núria Ruiz i Milà, the association’s representative that organized our trip. It was truly a very memorable experience.

Manos Angelakis is a well-known food and wine critic based in the New York City area. He has written about numerous top-rated restaurants, including Michelin-starred establishments in the United States, France, Spain, the U.K., and Italy. He is the senior food and wine writer for LuxuryWeb Magazine www.luxuryweb.com and The Oenophile Blog www.oenophileblog.com

Manos Angelakis
Follow
Manos Angelakis is a well-known wine and food critic based in the New York City area. He has been certified as a Tuscan Wine Master, by the Tuscan Wine Masters Academy, as well as being an expert on Greek, Chilean, and Catalan wines. He judges numerous wine competitions each year and is the senior Food & Wine writer for LuxuryWeb Magazine www.luxuryweb.com.
Website
SHARE
Friends Read FreeCopyFacebookTweet
You May Also Like