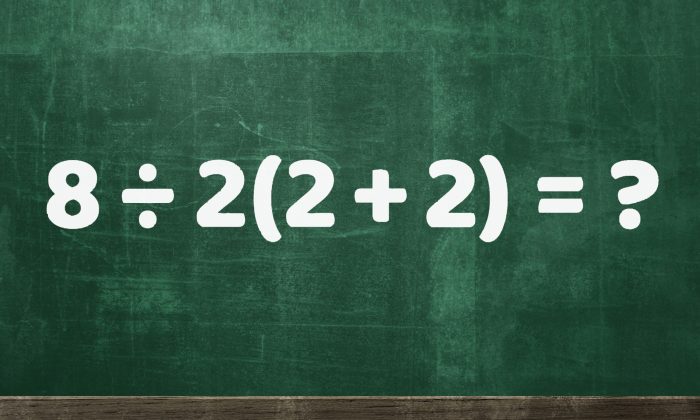 This Math Equation Has Many Scratching Their Heads, Can You Solve It?

Things can end up looking very different depending on the angle one looks at them from. Take any of the optical illusions that have been floating around for more than a century. Looked at from different vantage points, the image below can either look like a duck or a rabbit, for example.

However, while we are used to looking at images in various ways and finding more than one thing, we often think of numbers as much more concrete and less open to interpretation. After all, there aren’t two ways of looking at a simple equation like 2 + 2. The only answer can ever be 4.

Be that as it may, numbers can be tricky too as a viral math problem that has the internet in an uproar has shown.

On the surface, it doesn’t look like a difficult problem at all. We’re not dealing with any big numbers or functions from advanced calculus after all. Surprising as it may be, this problem has confused many internet users.

What could be that difficult about this problem? Well, it all has to do with Aunt Sally, not anyone’s actual aunt. It’s about what mathematicians call the “order of operations.”

In any longer math problem, you need to know what to do first. To help students remember this, teachers and textbooks often use the mnemonic device, (PEMDAS) Please Excuse My Dear Aunt Sally. From left to right, this helps us remember the order of operations: parentheses-exponents-multiplication-division-addition-subtraction.

So if we follow the guidelines set out by PEMDAS, we would work within the parentheses first (2+2) to get (4). Now we have 8 / 2(4). Going back to PEMDAS, we see that getting rid of the parentheses is the first order of business.

When the parentheses only have one number, that creates what experts refer to as “implied multiplication” or “multiplication by juxtaposition.” This means we can simply rewrite 2(4) as 2 x 4. So the next step is to multiply 2 times 4, giving us 8. The rest is 8 divided by 8 which equals 1. That’s simple.

But there’s a problem here. While many people did arrive at this answer, an equally large and vocal contingent arrived at a completely different answer based on the way they see the PEMDAS rules. Noting that multiplication doesn’t precede division, but rather that they are in the same category (like addition and subtraction), they argue that working from left to right is the most important thing.

But who’s right here? Well, that’s a difficult question to answer, and when mathematics experts were called upon to step into the debate, they didn’t give the black-and-white response that people in the “16” and “1” camps wanted.

Mike Breen, public awareness officer for the American Mathematical Society, explained as per Popular Mechanics: “In math, a lot of times there are ambiguities. Mathematicians try to make rules as precise as possible.”

From Breen’s perspective, “according to strict order of operations, you’d get 16, but I wouldn’t hit someone on the wrist with a ruler if they said 1.”

Dr. Rhett Alain, a physics professor from Southeastern Louisiana University, explained in Popular Mechanics, “there are different conventions. Some people spell it as ‘gray’ and others as ‘grey.’ We still understand what’s going on.” While the numbers remain absolute, how we look at them can change the answer.

All the math experts pointed out that the ambiguity was in the way the problem was written. For the experts from the math forum Dr. Math, “when we write 8 / 2 * 4 we really mean 8 * 1/2 * 4 which we can do in any order since multiplication is commutative; clearly, however you do it, it comes out to 16, not 1.”

It’s unlikely that this will end the debate anytime soon though.