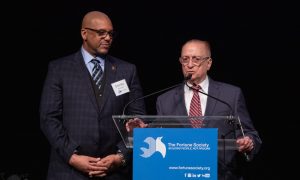 Over a decade of incarceration can make a man feel isolated, and can eat away at his humanity. However, prior to this man’s release, he met an unlikely friend that made him feel human again.

Jason Bertrand grew up in Florida under some difficult circumstances that primed him for trouble. His mother left him and his two younger sisters when he was about 6. His father had a serious drug addiction, neglected him, and was eventually incarcerated.

With no positive role models, Bertrand stumbled into a criminal life, and was eventually convicted of robbery. He spent 15 years in prison in Florida. Incarcerated at age 19, he wasn’t released until he turned 34.

Prison had a further damaging effect on Bertrand.

He found himself becoming a more violent, hard person in order to survive. He felt alone, and suppressed his feelings about the absence of his family in his life.

“For a long time I wore a mask about how I didn’t care that my family wasn’t there for me, that it didn’t matter,” Bertrand explained.

His whole life he’d had little opportunity to form positive relationships with other people. He no longer felt human.

As the end of his sentence approached, Bertrand was transferred to the Jacksonville Bridge Community Release Center to help prepare him to rejoin society.

There, he had the opportunity to participate in a transitional program called TAILS, which stands for Teaching Animals and Inmates Life Skills.

The purpose of TAILS is to bring out positive values such as responsibility and compassion in former inmates by having them train rescued pit bulls.

The inmates train the dogs so that they can become adoptable.

Bertrand was paired with a rescued pit bull named Sugar Mama on April 20, 2016.

Sugar Mama had been rescued from a dog fighting ring. Caged and forced to fight other dogs, Sugar Mama was recovering from a back surgery when she and Bertrand met.

Despite the abuse, Sugar Mama was immediately drawn to Bertrand.

“It was a whole new experience. She was playful, she was exuberant, she was loving. Despite everything that she had been through she had a very happy personality,” Bertrand told The Epoch Times.

Bertrand and Sugar Mama had experienced similar adversity in their lives, and he saw himself in her.

They had both lost their freedom and been forced into a situation where they needed to fight to survive.

Yet while they have lived a similar existence, Bertrand knows it was his own choices that put him in those circumstances. Sugar Mama, on the other hand, had not had the choice.

“I did something that caused my lifestyle. Her, she was just grabbed up by some individual for no reason for their own agenda. She suffered a lot of pain because of it,” Bertrand said.

Meeting Sugar Mama was an enlightening experience for Bertrand.

Life in prison had forced him to develop a tough persona in order to not appear vulnerable, and he struggled to abandon that mindset as he was being released.

“Myself, I came out of my situation, and I was still listening to the same lies that I listened to in prison: You got to be tough. You got to be a gangster. This is what you got to do,” Bertrand recalled.

But what he saw in Sugar Mama was the exact opposite.

“For her, she came out of her situation and was trying to be happy. It made me think about myself, and how I needed to react toward life. I chose to start taking on compassion and love because if I deserved what I got and she didn’t, and she could do the right thing, how couldn’t I?” he said.

All the inhumanity he’d experienced began to melt away. Sugar Mama made him feel human again.

His task was to train Sugar Mama so that she could be adopted. He taught her how to sit, lie down, stay, and walk on a leash. He also had to train her to behave in a normal environment, and be a social dog. She taught him virtues like patience, structure, and responsibility.

At the end of the program, the dogs are put up for adoption.

By this time, Bertrand had developed a deep relationship with Sugar Mama.

Sugar Mama had helped him find his humanity, and he couldn’t let her go.

TAILS realized Bertrand was the best person for Sugar Mama, and spent four extra months caring for her until Bertrand was released.

They’ve been together for two years now, and Sugar Mama has helped Jason as he rebuilds his life. He’s working full-time as an HVAC technician, and has since gotten married.

“The dog changed my life. She’s been my saving grace,” Bertrand frequently says.

Watch Bertrand tell his emotional story in the video below: