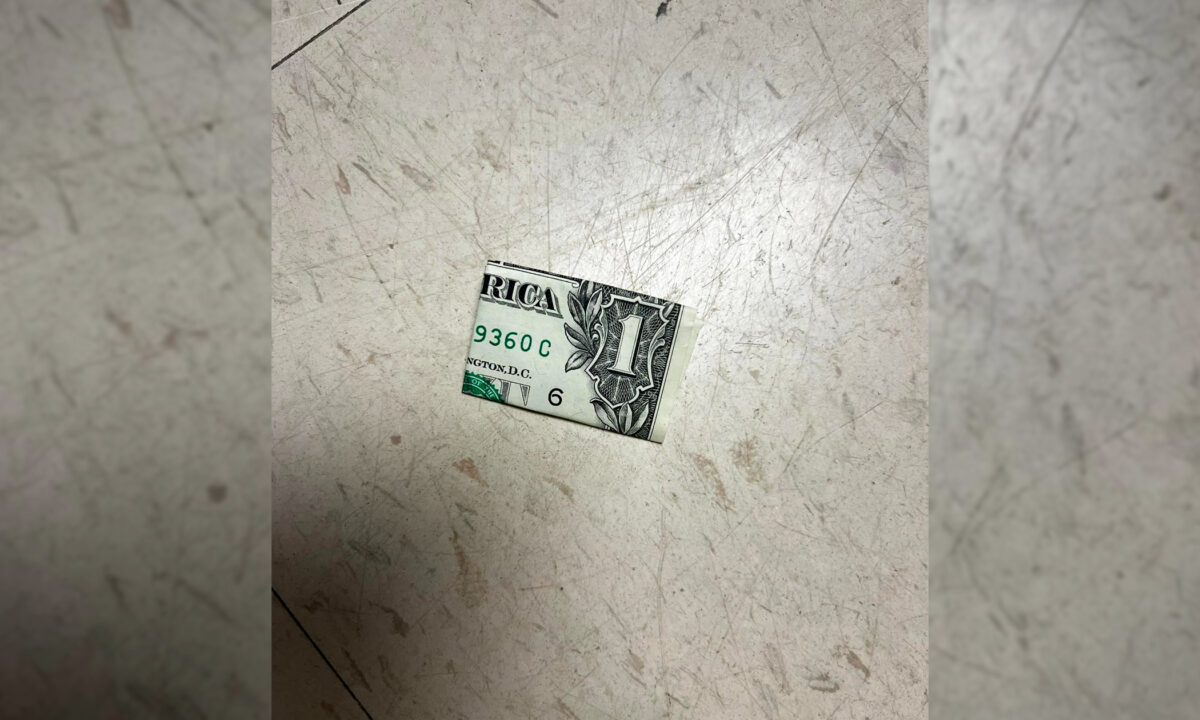 ‘This Is Very Dangerous’: If You See Folded Money on the Floor Like This, Do Not Pick It Up—Here’s Why

A shocking public service announcement is warning everyone not to pick up folded money that you might find on the floor in public places such as gas stations.

The paper bills could be lethal envelopes carrying deadly fentanyl, which can kill with just one dose.

The Perry County Sheriff’s Office in Tennessee recently found two instances of folded paper bills in gas stations. Inside was a white, powdery substance that tested positive for methamphetamine and fentanyl.

Posting a picture online, the Sheriff stated: “This is very dangerous, folks! Please share and educate your children to not pick up the money.

“I personally plan to push for legislation for a bill that would intensify the punishment, if someone is caught using money as a carrying pouch for such poison.”

They added: “It enrages me as a father and the sheriff, that people can act so carelessly and have no regard for others wellbeing, especially a child. I hope we find the ones responsible.”

This potentially deadly find is another symptom of the surge in fentanyl flooding into America from across its southern border in what some analysts are calling an “undeclared war” by China levelled against the United States.

Chemical ingredients shipped in from overseas to Mexico are then processed into fentanyl and smuggled in-country by drug cartels.

Deaths from the opioid are also reaching new heights. The CDC in November announced that last year’s overdose death toll exceeded 100,000 for the first time ever. In 2020, the yearly number of deaths from fentanyl spiked dramatically to 150 deaths per day in America. Fentanyl has become the leading cause of death for Americans aged 18–45.

Marking a “new paradigm” in America’s opioid crisis, fentanyl distinguishes itself from more “traditional” street drugs—such as crack, heroin, cocaine, and marijuana—as it is capable of killing with one dose. And unlike run-of-the-mill street drugs, fentanyl often assumes the form of pills, fraudulently posing as stamped, regular-looking over-the-counter drugs.

Michael Gray from the Actus Foundation, whose daughter died from fentanyl, told The Epoch Times that drug dealers do intentionally introduce lethal doses onto the streets intending to kill, as such deaths, when reported, serve as advertising; lethal doses attract seasoned users. While non-users might die from such doses, long-term addicts, who have built up a tolerance, seek them out.

The recent public service announcement in Tennessee demonstrates that the crisis extends beyond the border and is nationwide, while making it shockingly clear to what extent dealers are willing to go to pump these drugs into circulation.