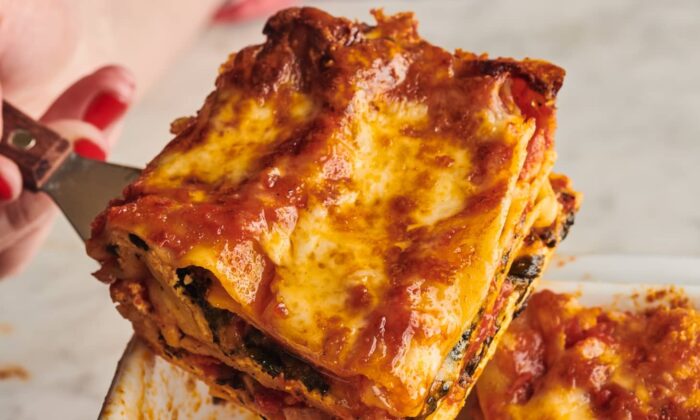 This lasagna doesn’t need much to turn it into a complete dinner. (Joe Lingeman/TNS)
Recipes

Say hello to the ultimate vegetarian lasagna. Three hearty layers of pasta, marinara, ricotta, mozzarella, and garlicky spinach ensure both vegetarians and omnivores will be satisfied. And we’re not talking about a wimpy handful of spinach: Nope, an entire pound of baby spinach is tucked among the layers, giving you a little something green in every cozy, decadent bite.

Here, I’ll show you how easy it is to make.

Lasagna is often a labor of love, but thanks to a few lasagna-making tricks I’ve picked up over the years, this one is simple and streamlined.

1. Soak your lasagna noodles. I picked up this smart tip from Ina Garten and have used it ever since. Instead of par-boiling your noodles or using no-boil noodles (which don’t cook up to have the same al dente texture as regular noodles), soak them in hot tap water while you prepare the fillings. This softens them so they cook efficiently between the layers of sauce, cheese, and spinach. I like to soak the noodles in the lasagna pan. Just drain the water when you’re ready to layer, and you have one fewer dish to clean.

2. Lean on store-bought sauce. Since I would like to have more lasagna in my life, I’m all for taking shortcuts to streamline the often-lengthy process. One easy way to cut down on prep time is to reach for store-bought marinara. Just be sure it’s one you love! My favorite is Rao’s.

Do you need to cook spinach before adding it to lasagna? Yes—but don’t overdo it! Fresh spinach releases a lot of water as it cooks, which can result in a soggy lasagna. That’s why you’ll want to sauté the spinach until it just wilts, which prevents it from releasing too much liquid too quickly. It will continue to soften in the oven, and any additional water that’s released will be absorbed by the lasagna noodles as they cook.

If you opt for frozen spinach, you need to make sure it’s as dry as possible. Start by thawing the spinach, then wrap it in a dishtowel and squeeze out as much liquid as possible before sautéing it with the aromatics.

Traditional Italian lasagnas use bechamel sauce to achieve creamy richness between each layer. The white, milk-based sauce—enriched and thickened with butter and flour—is luxe and indulgent, but isn’t necessary for all lasagnas. Italian American lasagna recipes generally call for ricotta cheese, which is equally creamy but much easier.

I personally love both iterations, although here I reached for ricotta as another way to streamline the process so this lasagna can be on your table faster. For the best flavor and texture, choose whole-milk ricotta. My go-to store-bought brands are Galbani Double Cream and Calabro.

This lasagna doesn’t need much to turn it into a complete dinner. Even though it’s packed with greens, I like to add a few more on the side. A quick and easy green salad, like an arugula or a spring mix salad, adds a little freshness to the comforting meal.

Prep: If using frozen spinach, thaw according to package directions. Transfer to a clean kitchen towel, roll it up in the towel, and squeeze out all the excess moisture.

Arrange a rack in the middle of the oven and heat the oven to 400 degrees F. Meanwhile, arrange the dry lasagna noodles in an even layer in a 9-by-13-inch baking dish. Cover the noodles with hot tap water and let soak while you prepare the spinach and cheeses, about 20 minutes.

Dice the yellow onion. Mince the garlic cloves. Grate the mozzarella cheese on the large holes of a box grater. Finely grate the Parmesan cheese.

Heat the olive oil in a large Dutch oven or pot over medium heat until shimmering. Add the onion and cook, stirring occasionally, until softened and translucent, 5 to 7 minutes. Add the garlic and sauté until fragrant, about 1 minute. If using fresh baby spinach, add it a few handfuls at a time and stir until just wilted, about 5 minutes. If using frozen spinach, add to pot and cook, stirring occasionally, until the liquid has evaporated, about 2 minutes. Season with 1/2 teaspoon of the kosher salt, 1/4 teaspoon of the black pepper, and the red pepper flakes, if using. Remove from the heat and let cool for 5 minutes.

Drain the lasagna noodles and set aside. Spread a thin layer of marinara sauce from the jar into the baking dish.

Arrange 5 lasagna noodles in an even layer on top of the sauce, breaking them if needed to fit (it’s OK if the noodles overlap slightly). Dollop and spread half of the ricotta mixture over the noodles. Spoon half of the spinach over the ricotta, then sprinkle with 1 cup of the mozzarella. Dollop and spread about a third of the marinara sauce (about 1 heaping cup) over the mozzarella.

Bake uncovered until the cheeses are melted and lightly browned, and the sauce is bubbling, about 30 minutes. Let cool on a wire rack for at least 15 minutes before serving.

The lasagna can be assembled and refrigerated unbaked up to two days in advance, or frozen for up to one month. Thaw the frozen lasagna for two days in the refrigerator before baking.

Leftovers can be refrigerated, tightly wrapped, for up to three days.