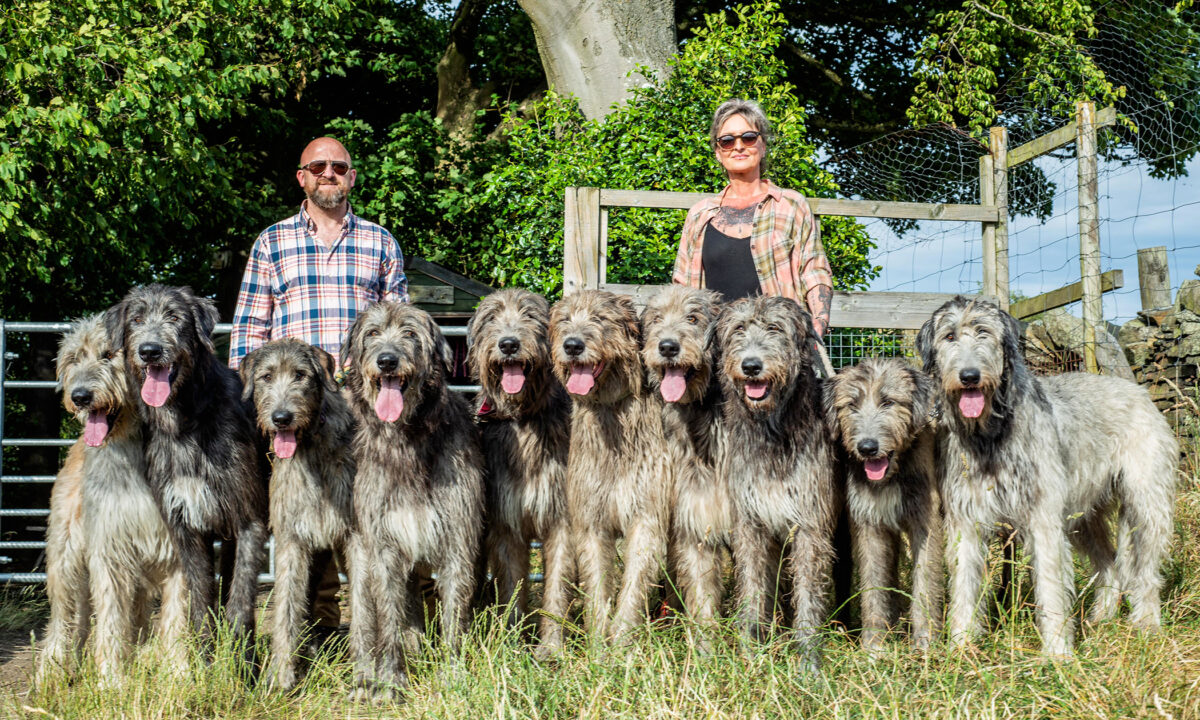 An English couple who share a huge love for dogs have a 15-strong pack in their country home—10 of which represent their favorite breed, Irish wolfhounds.

Claire Moorhouse and her husband, Mav, live in the English village of Holmfirth, West Yorkshire. Their plus-sized furry family includes their 10 Irish wolfhounds, three white Swiss shepherds, a whippet, and a lurcher.

The couple’s obsession with the Irish wolfhounds first began 10 years ago, in 2012.

“The intention was to have a go at showing, which we did,” Claire, 46, said. The pair had planned to have a male and female so they could show them. But they then decided that, rather than buying them, they’d have a go at breeding their female.

Describing their gentle giants’ characteristics, Mav said that they’re supposed to be the tallest breed in the world and have soft, gentle, boisterous characters.

He further explained that “they’re very loving dogs,” and it’s like they’ve got a “human soul.”

“We think he will also end up being the heaviest male,” they said.

Today, the couple breed Irish wolfhounds to show, but they don’t keep them in kennels. Instead, they have bought their current country home with the idea of having enough space to cohabit with the dogs.

“We can separate the girls when they’re in season, and we can separate anybody that gets injured or anybody that’s ill,” said Claire. “The house is specially set up to accommodate the dogs but we do have rooms where we can get some privacy, and some quiet time as well.”

Caring for the 15 dogs is “immense,” according to Claire. Feeding, exercising, and checking each one of them for injuries after outings on rough terrain—such as mountains, forests, and moorland—is a full-time job. Their weekly dog food bill for raw meat, kibble, and treats can reach 300 pounds (approx. US$365), in addition to regular bills for grooming and nail-trimming.

The couple keep evenings free to recharge themselves before starting each day at 6 a.m.

Claire and Mav mentioned that Irish wolfhounds are usually very big dogs and one can’t imagine really how big.

She also explained that the breed are usually boisterous and they can be very destructive and don’t always seem to have very good manners.

“They’re not a dog for anybody … but if you put the work in, they are completely worth it!,” she said.

Owing to their size, the wolfhounds are also “minor celebrity dogs,” said Mav, and the couple often prepares them for appearances at parades, local tours, restaurant openings, adverts, and TV appearances.

But they do get ample leisure time, too.

Mav said: “They love messing around in the great outdoors. They love chasing each other and paddling around in water,” whilst Claire added: “They like exploring new places, new lights, new sights, new sounds, new smells, and then they like to come home and rest.”

As if 10 Irish wolfhounds weren’t enough, Claire and Mav also take care of three white Swiss shepherds—”Irish wolfhounds are not a guarding breed … so we’ve got the shepherds to protect the house and protect the pack,” Claire explained. In addition, they have an ex-show whippet named Salad, and a rescued lurcher, Bentley.

The couple’s daughter, Nell, “a great junior handler,” adopted Salad after he grew too tall for shows, and today they are inseparable.

Meanwhile, Bentley was once slated to be euthanized, since he had numerous broken bones in his front left foot, and his former owner didn’t want him anymore. However, the couple’s daughter Eve, a veterinary nurse, took him on as a foster and had him for five months as they tried to save him. Bentley then found a potential home but the arrangement didn’t seem to work and he was returned as a result.

“Three months later and no home had been found, so we adopted him,” the couple’s website stated.

According to Claire, her family feel connected to each and every dog, and get a sense of deep fulfillment from watching them run about their home, gardens, and surrounding countryside, “doing what they love.”

Claire and Mav share about their dogs on a dedicated Instagram page, which has over 23,000 followers, and know they bring joy to others. Claire said: “People love them all over the world … they affect people so strongly.”