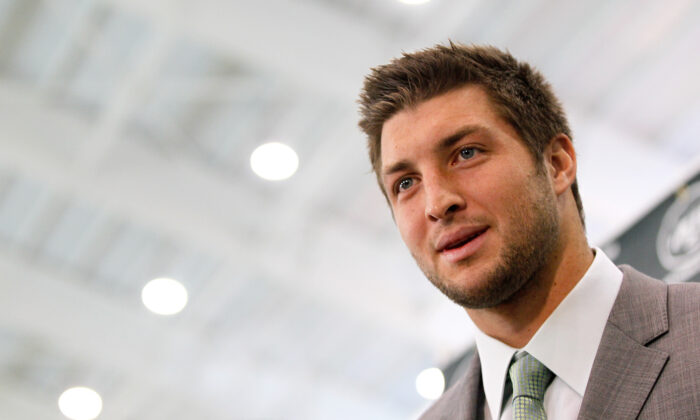 ‘They Thought I Was a Tumor’: Tim Tebow Says Doctors Told His Mother to Abort Him, Now He Protects Life

Athlete and Christian activist Tim Tebow, keynote speaker at the Kansans for Life Valentine’s Day banquet on Feb. 11, 2020, has won hearts with his assertion that championing the rights of unborn babies “really does mean a lot more than winning the Super Bowl.”

In his speech, Tebow shared a personal story. “My mom, 32 years ago, had doctors tell her she needed to abort me because if she didn’t, it was going to cost her life,” Tebow explained. “They thought I was a tumor.

“To make a long story short,” Tebow went on, “when I was born, they found out the placenta wasn’t actually attached. So, the doctor looked at my mom after 37 years of being a doctor and said, ‘This is the biggest miracle I’ve ever seen.’

“I’m so grateful,” Tebow concluded, “that my mom trusted God with my life and her life.”

Tebow has long been an advocate for the rights of unborn babies, even starring in an anti-abortion commercial for the 2010 Super Bowl with his mother, Pamela Tebow. “I know some people won’t agree with it,” Tebow commented at the time, as per ABC News, “but I think they can at least respect that I stand up for what I believe.”

Taking the podium on Feb. 11, 2020, Tebow described the shared goal of all banquet attendees as “a rescue mission.”

“You know why we call it a rescue mission?” he asked, as per National Right to Life News. “Because when we say that, it puts a timeline on it … It gives you a sense of urgency. It says we have to go, not because it’s our time, but because it’s their time.”

The event’s master of ceremonies Lamar Hunt Jr., co-owner of 2020 Super Bowl winners the Kansas City Chiefs, added, “I do not think it is a cliché to say we are in a life and death battle for the truth and authentic dignity of the human person,” per National Right to Life News.

“We need your full attention,” Hunt continued, addressing his audience of approximately 1,200 pro-life campaigners. “You need to drop what you’re doing and join us, and this can be in so many ways: prayer, assistance to those in need, emails, phone calls, in-person meetings. Get educated about what we’re fighting about here.”

Also in attendance was Archbishop Joseph Naumann, who spoke of the “Value Them Both” state constitutional amendment, a proposed modification to the April 2019 ruling of the Kansas Supreme Court to protect a woman’s right to an abortion.

This ruling, the Kansas Supreme Court explained, as per NPR, “allows a woman to make her own decisions regarding her body, health, family formation, and family life, decisions that can include whether to continue a pregnancy.”

Naumann praised the Kansas City Chiefs for their example of strength and endurance. “I think the Chiefs are an inspiration for us,” Naumann explained, as per National Right to Life News. “The game is not over in terms of the legislature this year … I think we’re here tonight to kind of encourage each other, to support each other, to win this victory for the unborn.”

Tebow likewise reflected upon his priorities as a campaigner before leaving the podium. “One day, when you look back and people are talking about you and they say, ‘Oh my gosh what are you going to be known for?’”