‘There was something divine in there that was captured so well’ 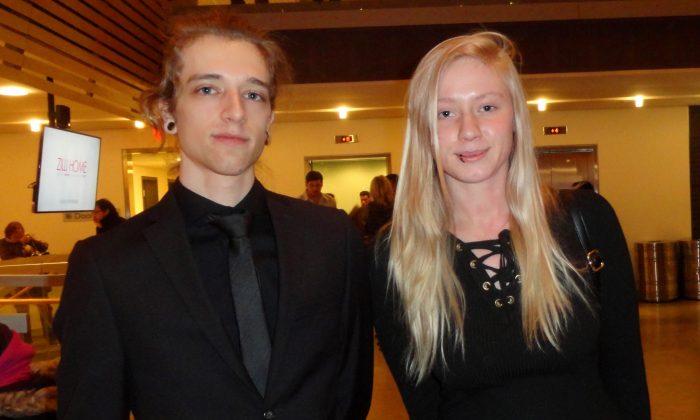 Theo Lebar and Liza Syssova enjoyed the Shen Yun performance at the Four Seasons Centre for the Performing Arts in Toronto on Jan. 3, 2018. “I think it's really nice that we were able to see 5,000 years of Chinese civilization in one night,” said Mr. Lebar. (Madalina Hubert/The Epoch Times)

“I really enjoyed the event. The way they incorporated the technology, the screen with the dancing, and how everyone just popped out with perfect timing, and it was so well coordinated.”

“It was just incredible—everything about it. There were so many interesting points that were brought up that so many people should know and see and hear. … I really appreciate the messages that were put out here today.”

“[The backdrop] was incredible. … It incorporated such fantastical, magical lands, and all the costumes and everything were just so beautiful and in sync. And there was an incredible vibe in the air that was just astounding.”

“It was moving. I can’t lie, I did cry a couple times during [the performance]. There was this aura and energy that was pulsating through the air, and the fact that everybody could see that, and even if they didn’t feel it the same way, obviously they were there to enjoy what was given to us. And I feel like it was a real blessing.”

“There was a lot of—I don’t know how to explain it, just something divine in there that was captured so well.”