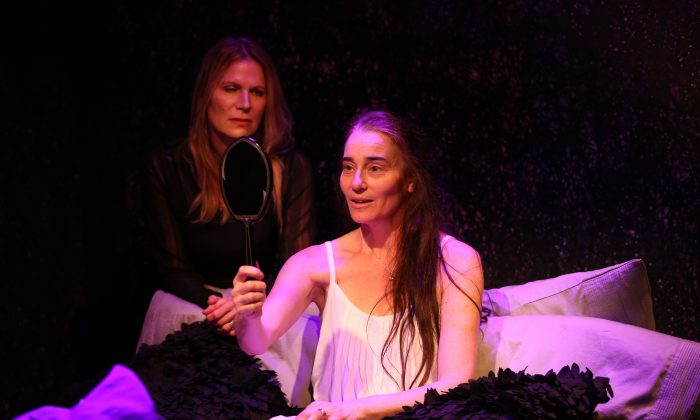 NEW YORK—Mel Brooks used to tell this joke: A fly complains that she has 500 offspring and none of them comes to visit. The central figure in Marina Carr’s “Woman and Scarecrow,” at Irish Repertory Theatre, doesn’t have 500 children; she’s the mother of eight, but none of them shows up while she is lying on her deathbed.

Nor does a doctor or priest appear during the play, which takes place at the present time in the Midlands, Ireland.

As the title suggests, most of the work is a dialogue between the unnamed woman, suffering from a terminal but unrevealed malady, and her imaginary alter ego, Scarecrow. The reason for the latter’s name is unclear since she is played by an attractive blonde in a black dress. The 40-ish-year-old Woman wears a white nightgown.

The husband, who appears at brief intervals, is referred to as Him (Aidan Redmond). The only one who has a proper name is Aunty Ah (Dale Soules), the shortest role.

The thing in the wardrobe is Death, which is not taking a holiday but seems to have a lot of time on its hands, waiting (mostly patiently) while the Woman and Scarecrow examine in detail the failed life of the soon-to-be deceased.

When Death does appear, it is a large, sharp-beaked black bird, a human-sized raven or crow—a menacing Big Bird.

Despite her name, Scarecrow couldn’t scare away a bird and doesn’t frighten Death, though she keeps the creature at bay and out of sight for over two hours.

If the playwright is suggesting by the lack of names that Woman and Him generically represent all or most couples, it’s a pretty grim picture of marriage.

The Woman expresses love for her children (for example, worrying about who will make sandwiches for them), but comes to the rather belated realization that she shouldn’t have stayed with her errant husband.

On the other hand, according to her reminiscences, at length with Scarecrow and briefly and combatively with the Man, she has not been a paragon of virtue either.

One incongruity is that, although she is in pain and taking drugs, the Woman is always completely lucid, whether conversing with Scarecrow, dropping references to Shakespeare and the Bible, or with the Man and Aunty Ah.

Even the supposedly realistic scenes strain credulity: Would a husband return home, with the children and other family members downstairs awaiting his wife’s demise (the Woman’s bed is upstairs), and have his girlfriend waiting in a car outside? And tell that to his dying spouse?

Dublin-born Carr is an elegant writer who turns out some mordantly funny lines here and there, such as the Woman examining her reflection in the mirror and musing about her “graveyard chic.” However, the play seems rather lifeless (ahem).

Director Ciaran O’Reilly’s staging attempts to inject some energy, for example, by having the Woman get up and dance during one of the hallucinatory scenes, but the verbose and overlong text provides few opportunities for action—which could be described as going, going, dead.

The only part that moved me was the ending monologue in which the Woman addressed the audience directly and the language rose to poetry. The work might be better on the written page or in a radio broadcast.

As expected at Irish Rep, the acting is on a high level, with Stephanie Roth Haberle compelling as the Woman, Pamela J. Gray scoring points as the often taunting and acerbic Scarecrow, the underused Aidan Redmond convincing as the unlikeable Man, and Dale Soules as the religious Aunty Ah.

Charlie Corcoran’s set design adequately depicts the Woman’s poverty; she doesn’t have much in the way of furniture. The background is dark with glittering dots, perhaps the nighttime sky, representing eternity. Michael Gottlieb’s lighting is effective, especially during the closing monologue where Haberle’s face is aglow.