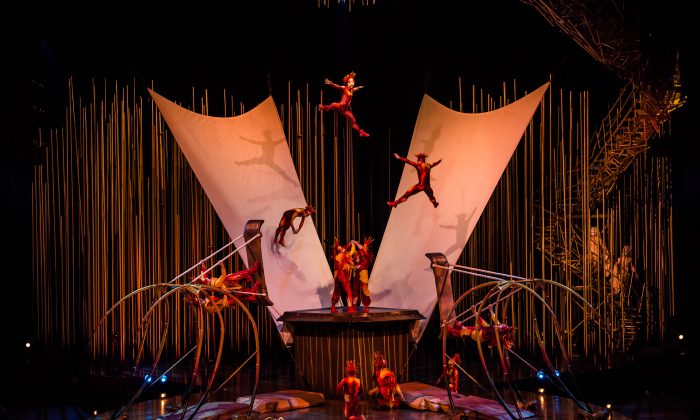 NEW YORK—A stranger in a strange land, a cast of magical creatures, some very enjoyable comedic moments, and impressive athletic feats—this is the world of Varekai (pronounced “ver-ay-kie”), the latest offering from Cirque du Soleil, which just finished a stand at the Barclays Center in Brooklyn.

While there was certainly a great deal of colorful action, which caused the audience to alternatively watch with awe and laugh with delight, the overall effect was somewhat less than it should have been.

The tale takes place in a magical forest. Many of the creatures look like they’ve sprung from Dr. Seuss’s imagination, and at least one talks like Popeye. Suddenly, a winged young man falls from the sky.

As he lies unconscious, his wings are removed by the creatures, thus preventing him from flying away. As he slowly begins to recover from his ordeal, one which left him initially unable to walk, the young man begins to adapt to his surroundings using various methods, including some oversized bicyclelike wheels to gain a form of mobility. Eventually he finds acceptance and even love in his new existence.

Interestingly, this aspect of the show winds up being the secondary storyline to other events. Specifically, various acrobatics and some effects that are usually only seen in cartoons—such as a performer lying on his back and twirling another person around by using his feet—dominate.

One also saw people hanging by one ankle while on a trapeze or holding onto a net by their neck while suspended some 40 feet above the stage.

The show offers various juggling efforts, a balancing act with Russian swings, and a finale that had the participants using a variation of a seesaw to launch each other clear across the stage.

While the athletics were certainly fun to watch, the overall enjoyment never approached the level of spectacular of other Cirque du Soleil offerings—that is, until it reached the finale.

Director Dominic Champagne was not able to integrate the various pieces into the overall story, with a result that much of what was seen felt rather disjointed and came off as a collection of skits and performances, rather than a complete whole.

It also might have helped had the young man been better worked into different segments, instead of being a peripheral character in many of them.

One place where things really did come together was in the excellent comedic work between two of the performers in two separate sequences. In the first, they played a third-rate magician and his assistant, which involved a bit of audience participation and some sexual innuendo.

The second was a totally sidesplitting number infused with a bit of slapstick involving a singer trying to warble a solo, only to find his spotlight would not stay with him. This resulted in him chasing it all over the stage and into the audience with a final payoff that reminded one of an old Bugs Bunny cartoon.

Another highlight of the show was the costuming. All were wonderful, especially the flowing robes the female performers wore as they were flown through the air on a rope they held onto with one hand.

The lighting effects were also quite good, adding just the right combination of brightness and shadow when needed.

Musical work was excellent, helping to add an additional level of excitement to the various sequences without the sounds becoming too overpowering.

Varekai (the term meaning “wherever” in the Romany language of the Gypsies), was certainly enjoyable and a nice show to bring children to, but the production felt somewhat tired with little to place it in the awesome category or make this a definite show to see.

Though clocking in at about two hours, the performance did pass quickly and painlessly.