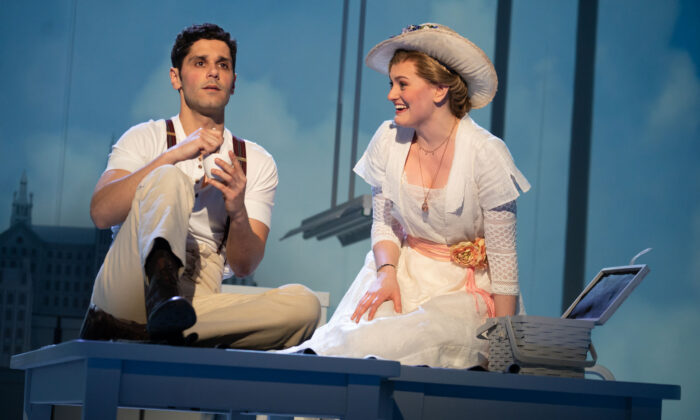 NEW YORK—A young girl, Ellen (Zoe Glick), around 11 years old, enters and sings: “Sometimes you see a picture, Or hear a song, Or read a letter, And a person that’s forgotten comes alive for a moment, They can tell you a story.”

And so begins the chamber musical “Unknown Soldier,” with its book and lyrics by Daniel Goldstein, and music and lyrics by Michael Friedman. This production marks a New York premiere, but it had a former incarnation at the 2015 Williamstown Theatre Festival at Williams College in Massachusetts.

As a chamber musical, it lacks the usual rah-rah song and dance chorus numbers, or any of the grand or grandiose elements of what constitutes the typical Broadway musical. “Unknown Soldier” is gentle, serious, and mysterious.

In a boring town in upstate New York, Ellen Rabinowitz (Margo Seibert) has found an old photograph of an unknown soldier and a pretty woman, whom Ellen realizes is her now deceased grandmother, Lucy Anderson (beautifully played by Estelle Parsons).

The photograph is in a newspaper clipping and reveals that the World War I soldier was an amnesiac, discovered wandering about in New York’s Grand Central Terminal. Hospital authorities, not knowing his real identity, name him Francis Grand (Perry Sherman).

But Ellen knows that the soldier is not her grandfather, who died in that war. Who then is he? She sets out to search via the aid of a librarian, Andrew (Erik Lochtefeld), who has access to old records of the area.

Ellen also seeks to find out more about the life of her grandmother, who raised her after Ellen’s mother died in childbirth. The younger Lucy is played by Kerstin Anderson.

Ellen discovers that Lucy apparently met the soldier, enjoyed a picnic with him, and married him that very evening. (A neat trick, but this is theater.) Their brief encounter results in Lucy becoming pregnant, and Ellen’s mother and ultimately Ellen are the result.

We never learn the identity of Francis Grand, but he is excellently played by Sherman. A doctor played by James Crichton has both serious and comedic moments. The ensemble, consisting of Emilie Kouatchou, Jay McKenzie, Jessica Naimy, and Thom Sesma, lends excellent support.

Musically, there is some exquisite singing by Kerstin Anderson. Patrick McCollum is credited with the choreography.

Director Trip Cullman is responsible for the contemporary look of the entire production, with the staging being spare and uncluttered. But this fact has not affected performances, which are uniformly rich and deeply felt.

Sets by Mark Wendland follow in the spare style: There is a platform and small replicas of lit buildings so that all must focus on the storyline and the characters.

Well received by the audience at the preview I attended, “Unknown Soldier,” I foresee, will have a very much appreciated and successful run.