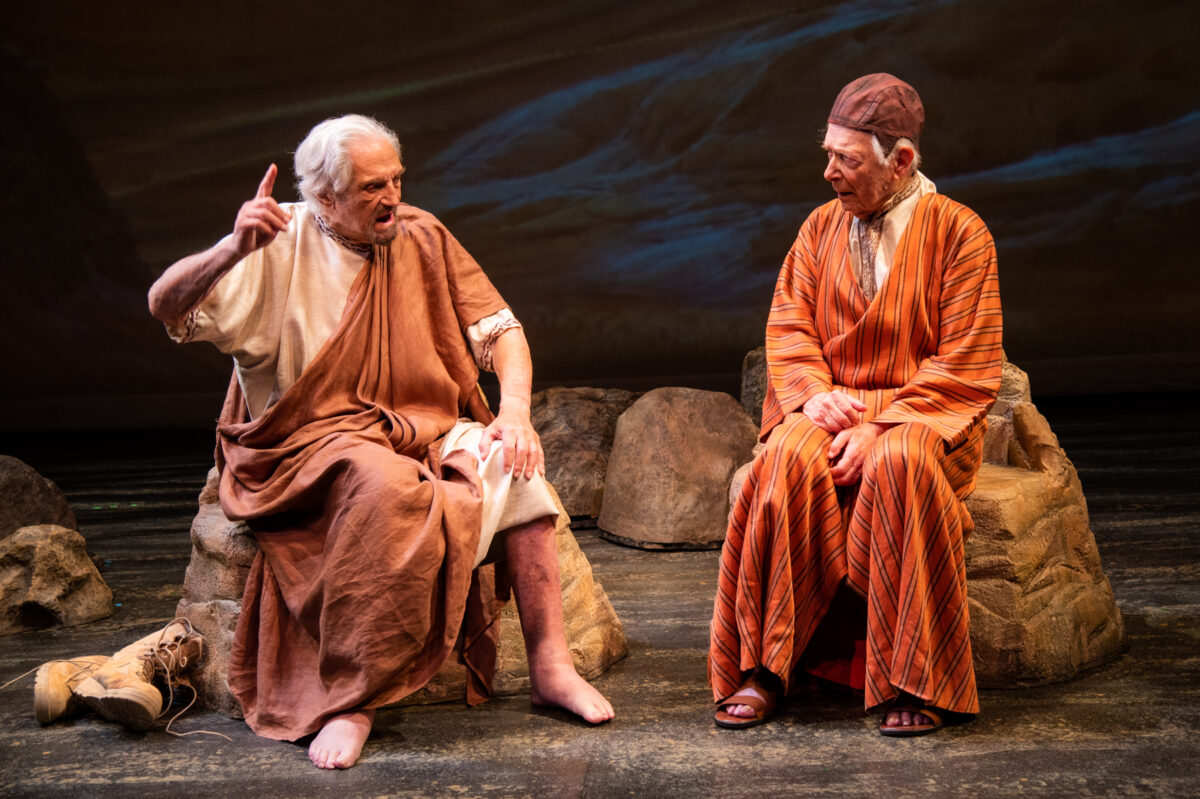 Hal Linden as Lou (L) and Bernie Kopell as Bud discuss important issues as they travel through the desert on their way to the Promised Land in "Two Jews, Talking." (Russ Rowland)
Performing Arts

NEW YORK—With a title that just begs for a punchline, “Two Jews, Talking” is exactly that. It’s also about two Jews kvetching, debating, discussing, questioning, and eventually being able to find a common ground in a changing world. This two-person, two-scene, world premiere comedy by Ed. Weinberger perfectly fits the term “lightweight,” yet still carries its own special sparkle, thanks to the power of cast members Hal Linden and Bernie Kopell.

Part 1 takes place in the year 1505 B.C. during an afternoon rest stop in the Sinai Desert. It’s on a Tuesday, to be exact, a day of the week when, according to Lou (Linden), nothing important ever happens. Lou, a former contractor to King Ramses’ second cousin, is sick and tired of having to wander in the desert with the rest of the Jews for the last 30 years as they wait for God to lead them to the promised land.

Lou, however, is having none of it and begins to seriously think about putting down roots right where they are and washing his hands of the whole “promised land” idea. It falls to Bud to convince his friend of the importance of believing in something greater than themselves and that they have not been abandoned to simply wander forever.

The second story switches the action to a present-day summer afternoon at a quiet park in Long Island. The park adjoins a cemetery where two elderly gentlemen, Marty (Linden) and Phil (Kopell) happen to meet while spending quality time with a loved one they lost.

These two strangers find common ground as they discuss such topics as family, sex, loss, the physical problems that come with old age, and how things have changed over the years.

Filled with old jokes (“every time my dentist looks into my mouth, he sees a beach house”), and other echoes of Borscht Belt humor, old pros Linden and Kopell take this feather of a play and immediately turn it into something warm and inviting.

From the moment they step on stage, one gets the feeling of being visited by two old friends who are able to make those in the sold-out audience feel completely at ease, and as if they’re the only other person in the room.

Linden, who looks sprier than his 91 years, masterfully handles the Weinberger material, giving off the aura of both a world-weary traveler, and one who has learned to depend on himself above all else.

His portrayal of Lou shows the character to be suffering a common effect of nostalgia—for really long ago. He recalls memories as a slave in Egypt where he ate regularly, had a roof over his head, and was only beaten when he went over budget.

In both eras, Kopell, the baby of the two at a mere 89, plays a more restrained role throughout as a sort of straight man to Linden’s more extrovert personas, yet is still able to get in a zinger of his own now and then. (“I had a dental plan that didn’t cover teeth.”) Both of Kopell’s characters are sustained by their faith, and thus have a sense of assurance and serenity that Linden’s characters do not.

This issue of the importance of faith, be its purpose to draw comfort, offer security, or simply because there are too many unknowns without it, becomes a running theme throughout the work. The play also contains a few swipes at the medical profession and, with it, the issue of health care for the elderly.

Dan Wackerman’s direction is fine for the most part, allowing Linden and Kopell to alternatively sound off and wax poetic with material well-tailored to their talents. The scene set in the present day goes on a little too long and could be cut by at least five minutes.

“Two Jews, Talking” offers a mildly pleasant diversion and the chance to see two veteran actors hold court over an enraptured audience, although one probably won’t remember much about the actual play when all is said and done.

To those who wonder if this is a show actually worth checking out, well, as mentioned more than once during the performance, “it couldn’t hurt.”