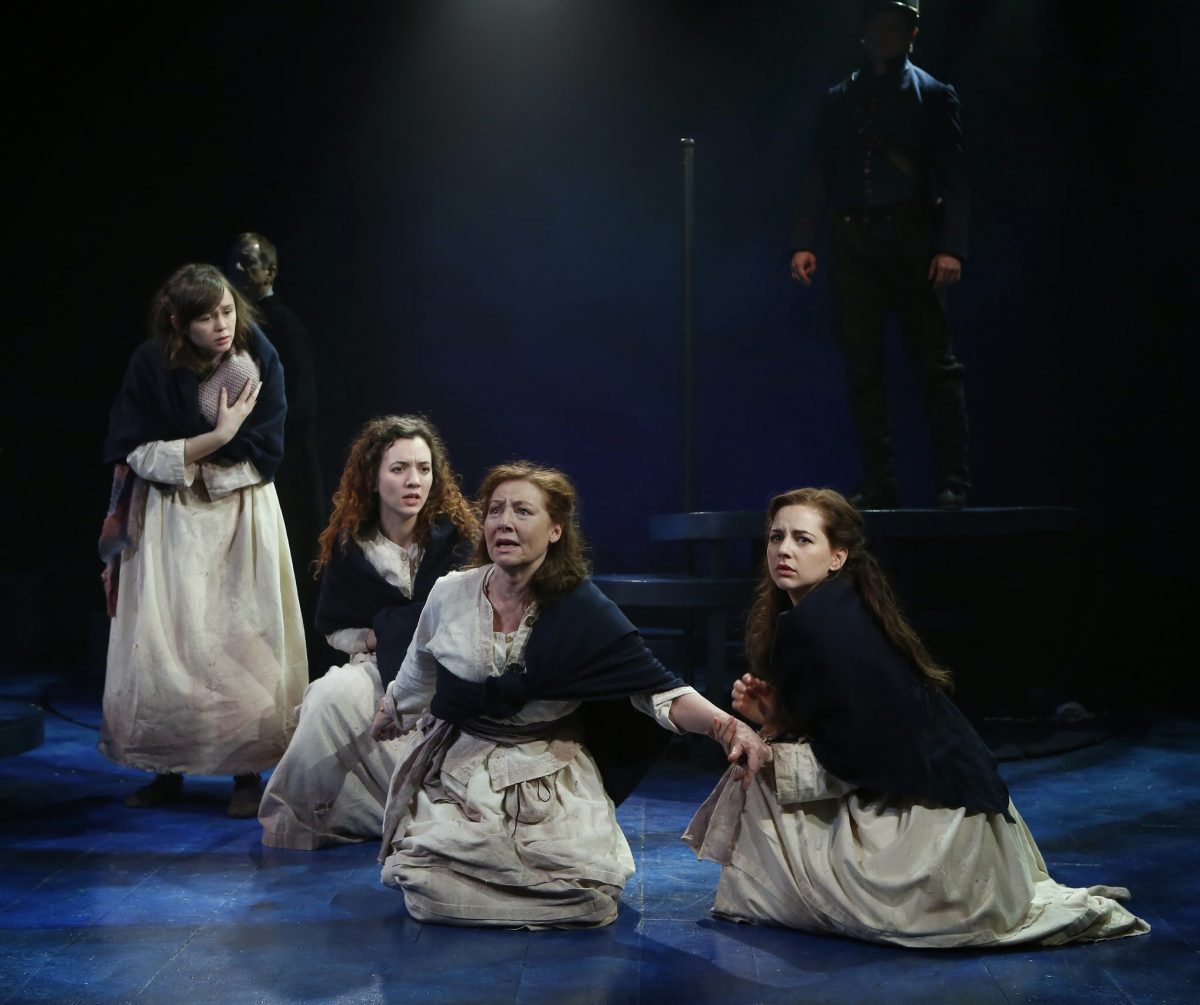 Does not set a straight course
BY Judd Hollander TIMEMarch 28, 2014 PRINT

NEW YORK—In the 1830s and ’40s, approximately 40,000 female “undesirables” were transported by the authorities from Ireland to the penal colony of Australia. The purpose was partly to get them out of the country and partly to provide female companionship for the great number of male convicts already there.

This background is the starting point for the new musical Transport (book by Thomas Keneally, music and lyrics by Larry Kirwan) at the Irish Repertory Theatre. Sadly, with a wealth of material from which to choose, what ultimately emerges is rather pedestrian.

The story takes place on the female convict transport ship “Whisper” in 1838, shortly before the beginning of the Irish Potato Famine.

Among the women being transported are Bride (Pearl Rhein), whose crime was stealing a bolt of cloth; Kate (Jessica Grové), a fiercely political woman pining for the true love she’s leaving behind; Polly (Emily Skeggs), a young girl with an illegitimate child and who, as a devout Protestant, feels completely isolated among the mostly Catholic inmates; and Maggie (Terry Donnelly), a women prone to visions, including the tragedy about to befall the country.

Captain Winton (Mark Coffin) is a British officer who runs the ship with an iron hand and is not above allowing his men to each pick a woman as a companion for the voyage.

Also on board is Delamare (Edward Watts), the ship’s surgeon, who is determined to get all the prisoners to Australia alive and enlists Bride to help him; Hennessy (Patrick Cummings), a sailor and a bit of a lecher; and Father Manion (Sean Gormley), an exiled priest trying to put his past political actions behind him.

Before the ship reaches its destination, some of the characters will suffer great tragedy, some will fall in love, some will change their viewpoints dramatically, and some—for both better and worse—won’t change at all.

Yet with so many possibilities and plotlines, the story keeps jumping from one to the other without giving enough time to any of them. As a result, we feel as if we’re continually coming into a scene too late to care about what’s happening.

One case in point is the character Hennessy, who initially wants to bed Kate only for the sport of it, then suddenly falls madly in love with her with no explanation for this change in attitude.

Then there’s Kate’s plan to take over the ship and sail it to America, which seems to be more the idea of a desperate woman who hasn’t thought the matter through. This is opposite from the methodical, albeit fiercely independent woman Kate has previously shown herself to be.

It doesn’t help that the score is not all that memorable. The musical scenes often are a distraction from the drama of the tale. (Although one number with the women singing and dancing together as a sort of respite from their continual troubles was rather enjoyable.)

Also unclear is exactly what the creative team is trying to say. Does the show mean to cast light on the transportation of these women to a strange shore, their rugged spirits that enabled them to survive such a voyage, or their learning to accept their fates and move on? This lack of a strong central theme is one of the things that prevent the story from reaching its maximum potential.

Ironically, it is the character of Captain Winton who turns out to be the most fully formed. A harsh man for whom the British Navy is his entire reason for living, his acts can be tempered with forgiveness, understanding, and rueful resignation. Good work by Coffin in making the most unlikely of characters the most interesting.

Watts does okay as Delamare and has a nice chemistry with Rhein; however, their scenes together feel stereotypical at times.

The rest of the cast is okay, though the other women in the company are more than a bit interchangeable with one another.

Tony Walton’s set design handily creates a feeling of actually being aboard ship.

Walton’s directing work, however, is a bit uneven, particularly whenever the action stops short for a musical interlude.

The choreography by Barry McNabb is fine, though the actors’ movements during a storm at sea come off as overly staged.

Costumes by Linda Fisher are nice, and the sound design by Carl Casella works especially well.

Lighting by Richard Pilbrow and Michael Gottlieb are strong, and the projections by Yana Biryukova are atmospheric.

Transport is an interesting tale, and the cast tries hard to bring it across, but it seems that the definitive story about Irish convict women sent off to Australia has yet to be written.