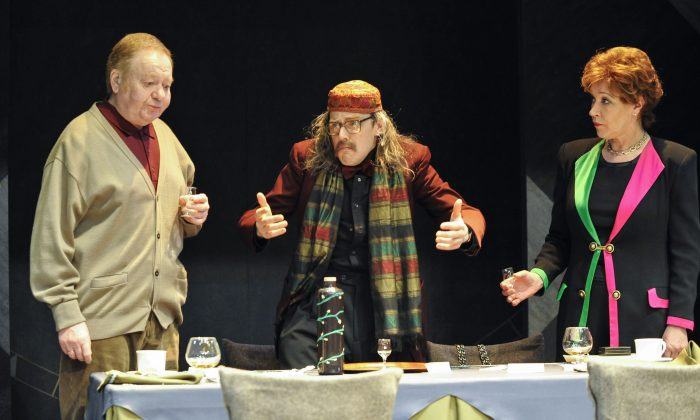 Patriarch Gerry (Russell Dixon) (L) celebrates the birthday of his wife (Sarah Parks) with some help by a waiter (Ben Porter) (C). Ayckbourn’s play is part of the Brits Off Broadway series. (Andrew Higgens)
Arts & Culture

Theater Review: ‘Time of My Life’

NEW YORK—All too often life’s brightest moments are never appreciated until they’re gone. Such is the message in Alan Ayckbourn’s deeply absorbing Time of My Life. The show, now at 59E59 Theaters, is one of a trio of Ayckbourn works in their Brits Off Broadway Festival.

While the group has much to be thankful for, including the fact Glyn and Stephanie have recently gotten back together after a period of separation, things don’t go altogether as planned. Maureen, in particular, is so nervous about meeting the family for the first time that she throws up.

Shortly thereafter, the story splits into three separate timelines, all taking place at the restaurant. Glyn and Stephanie’s story jumps ahead as Glyn takes over the family business only to find it’s not as financially sound as Gerry led everyone to believe.

Adam and Maureen’s relationship unwinds in reverse, going backward from the birthday party to their falling in love, their first date, and first meeting.

Meanwhile, Gerry and Laura’s story continues immediately after the party ends. It becomes evident their marriage isn’t as solid as originally thought. Gerry has a somewhat violent temper, while Laura had an affair in the early years of their marriage—a tryst Gerry has just learned about.

It also becomes clear that Laura is not good mother material, having had no use for Glyn from the moment he was born. While she does care for Adam, she has so smothered him with affection that he has no confidence of his own and is unable to make the slightest decision without her approval.

Gerry, on the other hand, is closer to Glyn, the more serious and driven of his two sons, and who he sees as a chip off the old block.

While Ayckbourn could have easily made Laura into a stereotypical, manipulative woman, he’s also imbued her with her own problems and pain, plus a sense of resigned humor, making her interesting on one level and detestable on another.

As these three stories play out with each couple having their own moments of crises, the message of the play becomes evident, which is to be true to yourself and pay attention to the important things right in front of you. This is something Laura and Gerry have not done long since they drifted into a “business arrangement” of a marriage, as Laura calls it.

Ayckbourn, who also directs the work, knows exactly what he wants from his actors, having each submerge their character’s personality as they all try to act how everybody else wants them to behave, instead of doing what actually makes them happy.

These situations are coupled with a good amount of humor and pathos. The latter is evident in Glyn and Adam’s relationship to their mother and the problems they have with the women in their lives.

Parks is brilliant as Laura, the person around whom the play flows. A caustic viper of a woman without a hint of remorse, she, nonetheless, does do a good job of admitting her own shortcomings.

Dixon is good as Gerry, an old-fashioned patriarch who drinks too much, keeps his problems to himself, and who, if he had his way, would have “straightened out Adam long ago.”

Stacey gives a wonderfully pathetic air to Glyn, a man desperate to earn the love he’s never gotten from his mother, while at the same time frantically trying to be oblivious to the train wreck his own life is about to become.

Powell is fine as Adam, who’s been so shackled to his mother’s needs that he begins subconsciously sabotaging his relationship with Maureen until there’s no possible way Laura will approve of her.

Caffrey is enjoyable as Maureen, a woman who so wants to make Adam happy that she’ll do whatever he says at her first meeting with his family. The character is also responsible for much of the humor in the play, speaking her mind and coming across like a breath of fresh air when first introduced.

Pithon is excellent as Stephanie, Glyn’s long-suffering wife, and one of the few people who goes from allowing things to happen to her to actually making them happen.

Rounding out the cast is Ben Porter who does well playing several waiters at the restaurant.

Jan Bee Brown’s sets are nicely functional, while the lighting effects by Tigger Johnson, used to indicate the transitions between scenes and time periods, all occur flawlessly.

Quietly thought-provoking, Time of My Life is a well-executed and cautionary tale about the dangers of worrying too much about what may be coming around the bend rather than seeing the joys and possibilities in the here and now.