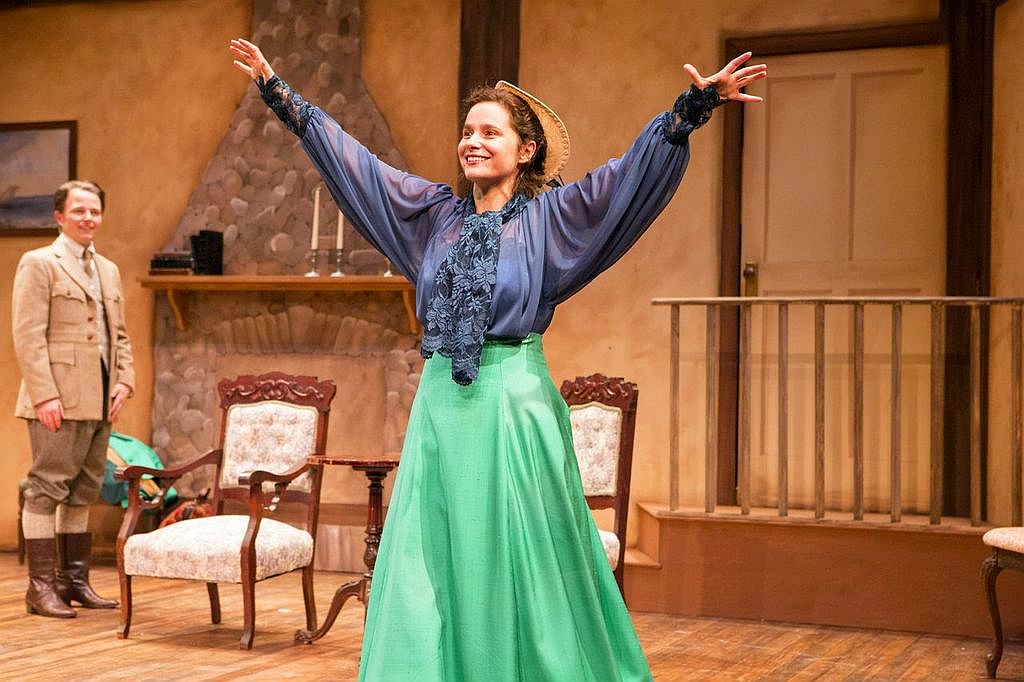 Theater Review: ‘This Side of Neverland’

NEW YORK—No man should ever take the fairer sex for granted, so says playwright J. M. Barrie in “Rosalind” and “The Twelve Pound Look.” These two one-act comedies are performed by the Pearl Theatre Company under the umbrella title “This Side of Neverland.”

The two plays seem at first glance odd choices for companion pieces, but after seeing them both, one can understand the reasons for putting them together. Each shows how women are forced to transform themselves in order to please their husbands, potential lovers, and society in general in male-dominated early 20th century Great Britain.

“Rosalind” takes place in a country inn where lodger Mrs. Page (Rachel Botchan) is a totally contented woman enjoying her age—somewhat over 40—and not worried about her figure or how she dresses. She’s the envy of landlady Dame Quickly (Carol Schultz) who, like most women, is fighting the inevitability of time every step of the way.

However, Mrs. Page’s stay is interrupted when Charles (Sean McNall), a young man of about 23, arrives at the inn and realizes she is the mother of Rosalind, a London stage actress with whom he’s madly in love.

While flattered by Charles’s attraction to her daughter, Mrs. Page knows this love can never be fulfilled. What Charles does not understand is that Rosalind is trapped in a perpetual status as the public does not care for middle-aged actresses. There are no good stage roles for women between 29 and 60.

In “The Twelve Pound Look,” Harry (Bradford Cover), a blustery sort, is about to be knighted—a fact that brings him great happiness. He is a successful man, currently worth a quarter of a million, with a wife (Vaishnavi Sharma) and two children.

Needing someone to answer his correspondence, he engages a typist who turns out to be his ex-wife Kate (Botchan), who left him more than a decade ago. As Harry struggles to come to terms with why Kate left, and while also trying to keep his current wife in the dark about the situation, it becomes clear he has neither the desire nor the ability to understand that it takes more than success to keep a marriage together.

It was an especially good choice to have the same actress play the pivotal role in each of the two plays, thus allowing a clear through-line to emerge. Kate and Mrs. Page, and by extension Rosalind, show the lengths they must go to in order to survive with no other support system but themselves.

It’s also worth noting that in each case the men see only what they want to see, especially after learning various truths that may be too uncomfortable for them to accept.

Also helping tie everything together is McNall’s performance as the playwright in both pieces. He plays the part of a sort of omnipresent narrator, tossing in various observations and witticisms.

Unfortunately, there’s no getting around the fact that the plays are rather dated, specifically in terms of the choices the women are forced to make, thus taking away a large part of the emotionality of each story. It’s a situation neither the actors nor director J.R. Sullivan are completely able to rise above.

Yet still present is the overall humor of each situation, as well as some pointed moral lessons about the dangers of taking anything or anyone for granted.

Botchan does a great job in both her roles, making each woman completely different, yet also showing them to have common ground: By living life on their own terms, they reap the rewards and the restrictions because of it.

Cover is properly bombastic as Harry, a man with his feet firmly in the past while steadfastly refusing to change in any way.

McNall is fine in multiple roles, showing the proper poise and bearing as Barrie and the impetuous enthusiasm of Charles; he also nicely plays a proper British butler.

Schultz does a pleasant turn as Quickly and also wonderfully handles the musical chores as a pianist; she offers some tuneful interludes at the beginning of each piece.

Sharma works well as Harry’s second wife, a person one looks at very differently at the beginning and end of her story, thanks to what has been said by Harry and Kate in between.

Fun for what it is, if nothing spectacular, “This Side of Neverland” is a pleasant diversion and enjoyable to see.