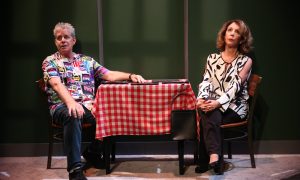 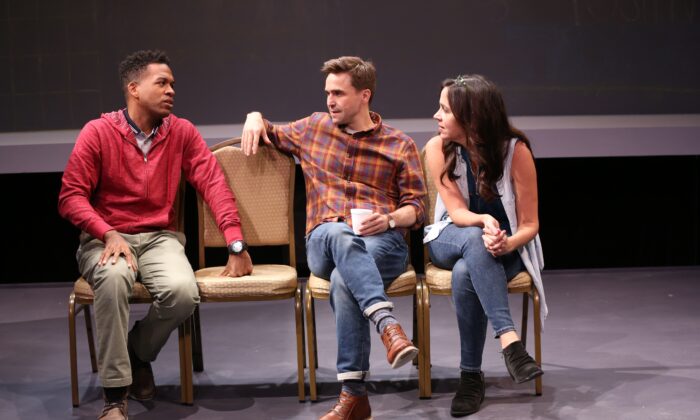 The cast of “The White Chip”: Steven (Joe Tapper) surrounded by (L–R) Genesis Oliver and Finnerty Steeves, who both play multiple roles. The story revolves around an alcoholic drying out. (Carol Rosegg)
Performing Arts

NEW YORK—When you’re in a downward alcoholic spiral, it’s only a matter of time before you hit rock bottom. The real question is just how far you’ll fall before trying to pull yourself back up—if you try at all.

The title of Sean Daniels’s “The White Chip,” now at 59E59 Theaters, refers to the token given to members of Alcoholics Anonymous who are serious about overcoming their addiction.

Steven (Joe Tapper) believes he owes much of his success to his daily alcohol intake. Never comfortable with his Mormon upbringing, and having quite the adversarial relationship with his mother (Finnerty Steeves), Steven realized early on that having a drink made him more relaxed and confident.

While initially adverse to the taste of liquor, Steven describes his first beer as “metal and water mixed together,” but he could soon hoist a glass with the best of them. It certainly helped that he attended college at Florida State University—an institution named, during his tenure there, “the number one party school in America.”

Drinking allowed him to talk to girls, have a good time at college, start his own theater company, and eventually schmooze his way into a directing job at one of the most prestigious regional theaters in the country.

There were a few bumps along the way, such as a drunk-driving incident or two, but Steven never thought of himself as having a drinking problem. He’s reasoned that if he was actually an alcoholic, almost all of his friends and professional associates were drunks as well.

He also convinced himself that alcohol was part and parcel of his job, as he was expected to hold his own when imbibing with potential donors at social functions.

However, as time goes on, Steven finds himself more and more in need of a drink just to be able to function. It’s not long before his drinking, which he believes to have firmly in control, threatens to cost him everything he holds dear. In fact, his drinking causes rifts in his personal life, just when his family needs him the most.

The Humor in It All

While “The White Chip” presents an unflinching look at the insidious power that addiction can hold, it does so with enough humor to make the work feel nothing like a sanctimonious condemnation or a TV movie about the evils of drink.

There’s a reason why the press materials bill this play as “A dry comedy about drying out.” There’s a scene when Steven gets dating advice from an airport bartender (Genesis Oliver), and when he reels off a list of theatrical and literary figures who were drunks. These details help offset the deadly serious elephant in the room that the audience is all too aware of, but that Steven is not willing to face.

Tapper does a great job as Steven. The character slowly but inexorably self-destructs before our eyes. Yet at the same time, he remains likable enough to make us want to see how things turn out for him. Particularly engaging are some of the scenes with his family, especially the moment he does finally reach out for help to the one person he never thought would be there for him.

Steeves and Oliver do quite well in multiple roles. Steeves is especially effective as the women in Steven’s life. Among them is his mother, with their ever-changing relationship becoming one of the central points of the play. Oliver meanwhile gives a quiet dignity to the role of Steven’s dad, a man whose own childhood issues shaped his future actions as a parent.

The direction by Sheryl Kaller is tightly focused. The plot unfolds at a leisurely pace during the comedic moments, with the action and the enjoyable overall amiability coming to a screeching halt at the dramatic points.

Rachel Fae Szymanski’s lighting nicely alternates between the stark, such as at the various AA meetings Steven attends, and the more subdued during certain times of crisis.

It’s not often that one can see a play about an important subject and fully experience its message while being seriously concerned one moment and laughing out loud the next. “The White Chip” does exactly that and is all the better for doing so.