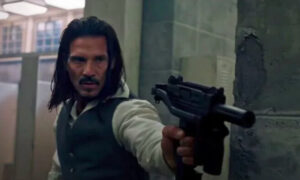 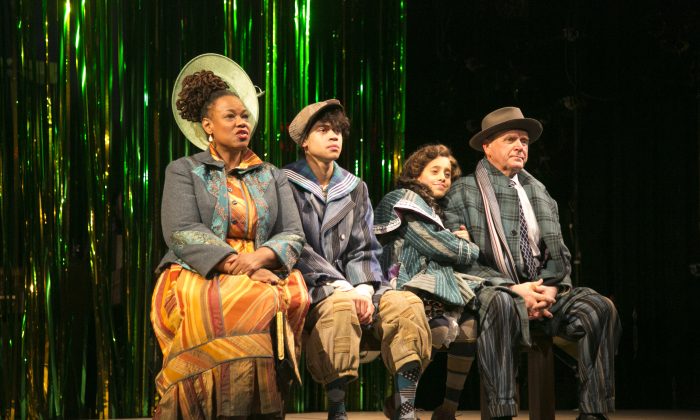 Theater Review: ‘The Skin of Our Teeth’

Finding the strength to begin, again
By Judd Hollander

NEW YORK—Thornton Wilder explores the endurance of the human spirit in his Pulitzer Prize-winning and seldom-seen work, “The Skin of Our Teeth.” Presenting an allegorical journey in which the normal rules of time and structure do not apply, the play is being given a striking revival by Theatre for a New Audience at the Polonsky Shakespeare Center.

George Antrobus (David Rasche), a long-time resident of Excelsior, New Jersey, is a widely respected man. Among his contributions to society are the alphabet, the wheel, the lever, and the brewing of beer. By his side for the last several thousand years have been his stalwart wife, Maggie (Kecia Lewis), the inventor of the apron, and their maid, Sabina (Mary Wiseman).

The clan comes face to face with, among other things, an ice age, a great flood, and seven years of war.

The spoils of a long-ago war, Sabina has also been George’s mistress. Not surprisingly, the two women have a strongly adversarial relationship.

Further complicating the Antrobus family life is George and Maggie’s son Henry (Reynaldo Piniella), formerly named Cain. A young man prone to violence, he long ago killed his older brother, with a slingshot. Now, George and Henry rarely see eye to eye on anything, and it falls to Maggie to keep the family dynamics on an even keel—especially as George likes everything just so when he comes home each night.

Despite their internal conflicts, the Antrobus family proves to be a band of survivors. The clan comes face to face with, among other things, an ice age, a great flood (one in which a boat filled with animals is launched from a pier in Atlantic City), and seven years of war. After each disaster, they find themselves tasked with rebuilding the world.

This philosophy is evident in George when he is elected president after yet another series of disasters: He tells the crowd that since good times are upon them, it’s time to “enjoy yourselves.” However, enjoying oneself for too long can make one blind to new troubles that may be approaching. Maggie understands this point instinctively, and her intuition quickly turns out to be true.

Whereas George at times is willing give up, both in terms of his family and in preserving the human race, Maggie continually sets him straight. But her fierce streak of protectionism does not always extend outside her immediate brood. When a band of refugees arrive at the Antrobus home seeking warmth and shelter, Maggie fears they will take needed resources, so she’s perfectly fine with keeping them outside. It falls to the more open-minded George to convince her otherwise.

It’s moments such as these that give the work a topical flavor and a grounding in reality, despite its almost absurdist situations.

Rasche brings a strong everyman quality to George. The character comes off as a man who ultimately does the right thing, even though he often has feet of clay. Lewis offers a nice counter-balance as Maggie, who is more realistic than her husband, but also more of true believer in mankind.

The actions of Sabina strike a chord just as powerful, thanks to an excellent performance by Wiseman. The most cynical character in the play, Sabina not only questions the validity of humanity but that of the text itself, by breaking the fourth wall and refusing to perform certain scenes as written. Both the playwright and director Arin Arbus make clear that if the audience starts to feel too comfortable with the story, then they are not doing their jobs.

Arbus deserves credit for taking the script, which, in the wrong hands could easily become a lengthy farce or an endless diatribe, and turning it into a compelling story of one family’s survival and, through them, the survival of humanity.

Riccardo Hernandez’s sets are also quite good, especially the Antrobus home. It alternatively projects a feeling of familiarity, security, and sanctuary.

Performed with a cast of over 30, “The Skin of Our Teeth” offers a fascinating look at what human beings are capable of and how, if we keep trying to make the world better, someday we just might get it right.

‘The Skin of Our Teeth’
Theatre for a New Audience at the Polonsky Shakespeare Center
262 Ashland Place, Brooklyn
Tickets: 866-811-4111, or tfana.org
Running Time: 2 hours, 30 minutes (one intermission)
Closes: March 19