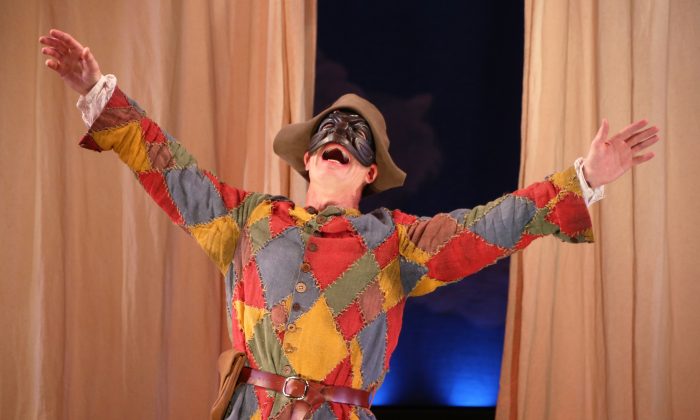 NEW YORK—The cast in Theatre for a New Audience’s presentation of Carlo Goldoni’s 18th-century farce “The Servant of Two Masters” doesn’t just break the fourth wall, they gleefully bring it crashing down upon the audience’s heads. Filled with zingers, double entendres, asides, and modern-day references, this wonderfully entertaining production at the Polonsky Shakespeare Center never fails to delight.

The play is written in the style of commedia dell’arte, where the basic plot points and characters are sketched out beforehand and the performers then have the chance to add a healthy dose of improvisation to the mix.

Underlying all the zaniness is the idea that love will eventually win out.

Where else can you see two mid-18th-century Italian characters suddenly start singing about New York City, or having “Mike Pence” be the safe word for any situation even remotely off-color? Also popping up are several references to Donald Trump, the Broadway musical “Hamilton,” and other theatrical productions.

In the city of Venezia, Clarice (Adina Verson) and Silvio (Eugene Ma) are very much in love and preparing to marry. Clarice’s previous suitor, the late Federigo Rasponi, had been the business partner of Clarice’s father Pantalone (Allen Gilmore) until he was killed in a duel by Florindo (Orlando Pabotoy). Florindo fled immediately after the killing.

Before the nuptials of Clarice and Silvio can take place, Truffaldino (Steven Epp), servant to Rasponi, arrives and announces that his master is not only alive, but right outside the door. In reality the person who enters is not Rasponi, but his sister Beatrice (Liz Wisan).

Beatrice has come to Venezia disguised as her brother in order to search for Florindo, who she loves most dearly, as well as to continue her late brother’s business dealings with Pantalone. Beatrice’s true identity is known only to Brighella (Liam Craig), the owner of the local inn.

It’s not long before the perennially hungry Truffaldino believes he has been abandoned by the disguised Beatrice, and so offers his services to the first man of means to cross his path—Florindo, who has just arrived in town.

With Beatrice’s return shortly thereafter, Truffaldino finds himself having to follow the instructions of two employers. While trying to keep both happy and preventing each from finding out about the other, Truffaldino also begins to fall in love with Clarice’s servant Smeraldina (Emily Young).

As the three star-crossed couples move in and out of each other’s orbit, confusion, helplessness, and comedic mayhem become the order of the day.

Using Constance Congdon’s adaptation of Christina Sibul’s translation of the work as a starting point, Epp and director Christopher Bayes adapted it further.

The end result takes what is essentially 90 minutes of amusement and stretches it into 2 1/2 hysterical, and at times ribald, hours of nonstop mugging, preening, audience interaction, and rather corny puns (complete with rim shots from the accompanying musicians). Bayes’s direction is spot on, working with the actors to ensure the laughs and occasional groans keep coming.

Underlying all the zaniness is the idea that love will eventually win out, and that the truth will set one free. The truth takes a while to come to the forefront when deception is involved, and those involved in the chicanery must first suffer the consequences for their dishonesty, no matter how necessary the deceit may have been.

The entire cast is excellent, with Epp perfectly embodying his role as the beleaguered Truffaldino, wondering when the play will start—and later, whether it will ever end—as he tries to navigate his ever more difficult situation as best he can. It reaches a hilarious crescendo when he tries to serve two separate dinners to his two separate masters at the same time.

Pabotoy works very well as the somewhat self-important Florindo, who adds as many flourishes to his performance as humanly possible. Wisan is nicely earnest as Beatrice, especially when expressing her love for Florindo or her exasperation at Truffaldino for failing to carry out her instructions.

In the wrong hands, “The Servant of Two Masters” could be a complete disaster. Due to the efforts of this very professional creative team, the work is an absolute triumph.

Also in the cast are Aidan Eastwood and Sam Urdang, and musicians Christopher Curtis and Aaron Halva.