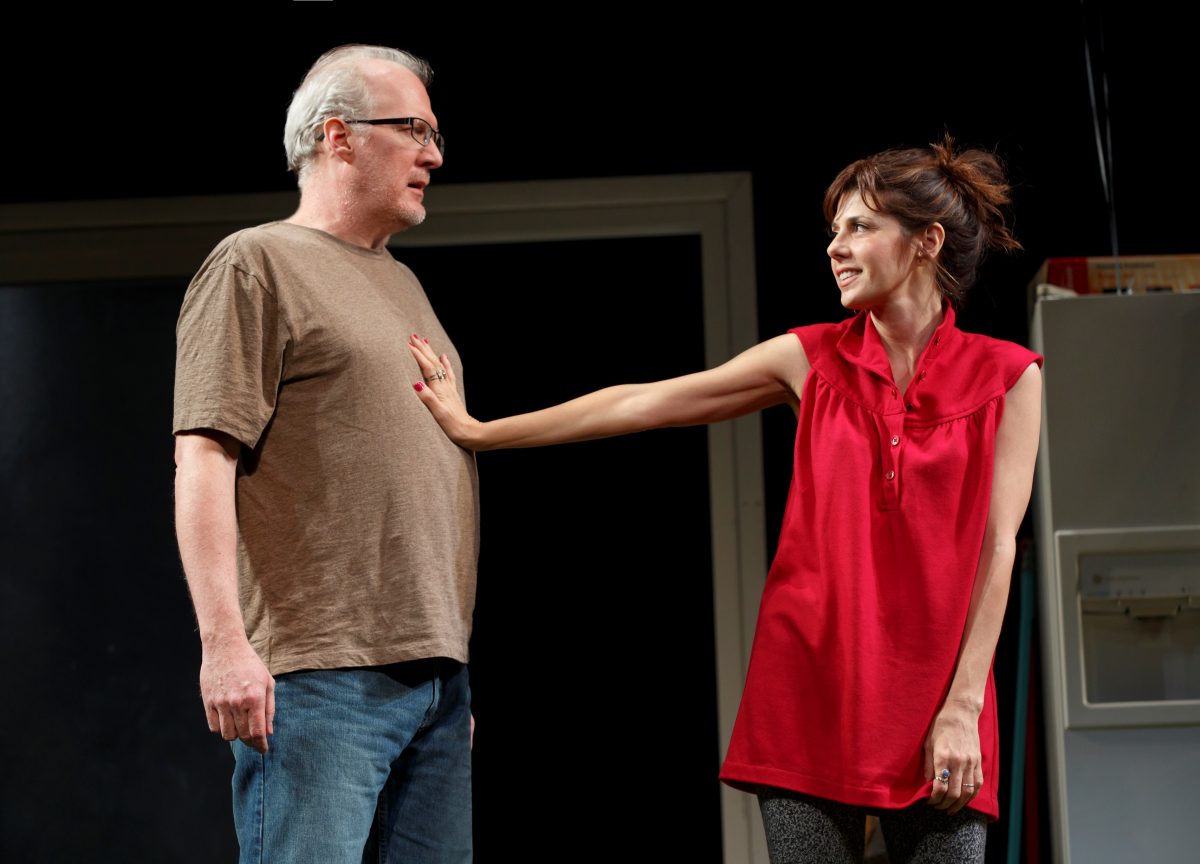 ‘The Realistic Joneses,’ Where Reality is Just a Word

NEW YORK—How much do you really know about your next-door neighbors? That’s the question at the heart of The Realistic Joneses, an unusual and involving work by Will Eno at Broadway’s Lyceum Theatre.

In a small town near the mountains live long-time married couple Bob and Jennifer Jones (Tracy Letts, Toni Collette). Jennifer is an introspective sort, enjoying life’s quiet moments and the chance to look at the stars, while Bob is more crotchety and easily irritable, wanting simply to be left alone to worry. The two have long since settled into a life of routine.

Their ordered existence is disrupted one night when a young couple, John and Pony Jones (Michael C. Hall, Marisa Tomei), drop by unexpectedly. The two have rented the house nearby and want to say hello.

John and Pony are everything Bob and Jennifer are not. Pony is rather flighty, while John is more thoughtful, picking up on things others seem to miss.

Yet it soon becomes clear there are more similarities than differences between the couples. John is suffering from a rare neurological disease, one with which Bob is also afflicted. This illness is the reason John and Pony moved to the area, as the same world-renowned physician that’s treating John is also treating Bob.

Pony, like Jennifer, is the more nurturing type, while John and Bob both have the same “leave me alone” attitude at times.

There also develops a strong attraction between Bob and Pony and John and Jennifer, with the younger ones seeming to have known their elders far longer than originally indicated. There’s also a moment in the show when Bob is referred to as John.

Are John and Pony actually younger versions of Bob and Jennifer? Are they strangers with an agenda of their own, offering a warning about the dangers of losing one another while trying to rekindle the passion? Or are the youngsters just exactly who they appear to be?

This question really crystallizes when Bob and John stand side by side contemplating their lives one evening and, despite their obvious physical differences, look to be almost the same person.

Eno uses his play to look at the duality of people while pointing out the more different we are from one another, the more we are the same. It’s a piece filled with numerous conversational non sequiturs with characters suddenly going off on different tangents or suddenly inserting something into a conversation five minutes after that subject has already been covered.

This premise prevents things from becoming both too comfortable and too much like a sitcom as the audience tries to unravel the mystery presented.

Letts is very good as Bob, an aging soul who may have long since fallen out of love with his wife, initially resenting these two new interlopers, but eventually finding a common rapport with both. At the same time, he also finds himself reaching out to his wife more than he has in a long while.

Collette is fine as Jennifer, a woman who’s become exhausted trying to hold her marriage together, and who perhaps sees in John someone who reminds her of how much life has to offer.

Tomei is good as Pony, seemingly the least complicated of the four and perhaps the most unreliable—as shown at one particular point—yet she also has the capacity to feel very deeply, as she shows in her scenes with Bob.

Hall does an excellent job as John, the most interesting of the foursome, and who just may be the person who most understands what’s actually happening. A deep thinker and rather philosophical fellow, he’s often far away or far ahead of the others when their conversations start. Yet like the rest, he carries his own pain and is looking to be spiritually free.

All four work together marvelously, making the show a perfect example of ensemble acting.

Sam Gold’s direction is good, keeping the show moving nicely. The quips and comments fly fast enough to cause the audience to wonder just what is going on, but never too quick or abrupt to feel jarring or unnatural as the story plays out to its eventual conclusion.

David Zinn’s set of small-town America works well, a nice touch being a display of a roadside sale; costumes by Kaye Voyce are good; and the lighting by Mark Barton and sound design by Leon Rothenberg are wonderfully atmospheric.

An introspective tale about four not-that-different souls, The Realistic Joneses offers a stimulating examination into the nature of who we are. One can draw one’s own conclusions regarding the ultimate outcome. The final moments and the journey taken to get there are all very good indeed.