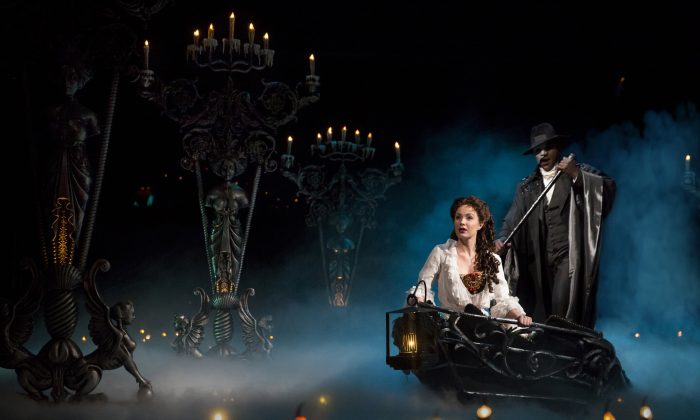 Christine (Sierra Boggess) is spirited away by the Phantom (Norm Lewis) to his underground world. (Matthew Murphy)
Arts & Culture

Theater Review: ‘The Phantom of the Opera’

Set mostly in late 19th-century Paris, the musical tells of a mysterious phantom (Norm Lewis), a partially masked figure who has been terrorizing the Paris Opéra House and those who perform there. When the management of the venue changes hands, and the new owners refuse to follow the Phantom’s demands—ones which include making Christine Daaé (Sierra Boggess), a young singer with the opera company, into a star—it’s not long before several unexplained and dangerous “accidents” occur.

Christine has been taking singing lessons from the Phantom in secret, with the tacit silence of the rest of the performers. She’s also completely fascinated by this man until she sees what lies beneath his mask.

While the Phantom is usually content to watch Christine from afar, he finds himself stung by jealousy when she meets Raoul (Jeremy Hays), an old childhood friend who quickly falls in love with her. Thus begins a romance that the Phantom is determined to destroy.

At its heart a love story, what elevates the show to the stratosphere is Lewis’s superlative portrayal of the Phantom, alternatively causing one to feel fear, revulsion, sympathy, and pity for the character.

Lewis delivers his songs beautifully, bringing across a feeling of malice in the title tune and heart-rending passion in “The Music of the Night.” His final moments with the latter are sure to bring tears to one’s eyes.

Boggess does great work as Christine, a girl literally swept off her feet by her foreboding teacher, while showing the growing terror she feels when she becomes his virtual prisoner. She also matches Lewis nicely in the vocal department, doing very well with him in the title number as well as in her haunting solo “Wishing You Were Somehow Here Again.”

Hays is very good in the role of Raoul, playing the somewhat stereotypical but pivotal role of a young man in love.

Elsewhere, Ellen Harvey cuts an imposing figure as Madame Giry, the choreographer of the company, who may know more about the Phantom than she lets on.

Laird Mackintosh and Tim Jerome are fine as the owners of the Opéra House, adding some much needed comic moments in the “Notes” sequence.

Also quite good are Michele McConnell and Christian Sebek, leading players of the company, who suddenly find their future career paths controlled by the Phantom.

Webber’s score is wonderful from start to finish and filled with memorable tunes. Lush and melodic at times and quietly simple at others, each song brings out a variety of emotions, ranging from fear and obsession to a touch of quiet satisfaction. The last is evident in the number “Masquerade.”

Harold Prince’s direction is strong, allowing most characters to take command of the stage almost as soon as they appear. Prince is helped greatly by Gillian Lynne’s musical staging and choreography, the two being able to blend the book and music scenes together perfectly. The entire show moves in such a way that one is never quite sure just what will happen next.

Production design by Maria Björnson is wonderful to behold, especially the first time Christine and the audience are taken to the Phantom’s lair, an entire world deep inside the bowels of the Opéra House.

Björnson’s costumes also work well, initially seeming just a bit drab and then slowly becoming more vibrant as the story progresses, coming to a magnificent crescendo with the “Masquerade” number at the beginning of Act 2.

Also excellent is the lighting work by Andrew Bridge, with various scenes nicely lit or appropriately in shadow as circumstances dictate.

There are a couple of hiccups along the way. At times it’s hard to hear the actors speaking over one another, especially during the “Notes” sequence. Also, one piece of the production that looks somewhat dated is the chandelier, which plays an important part in the story and could do with a bit of revamping. There was also a moment in a scene between the Phantom and Raoul involving a rope that looked a bit too staged.

With the few aforementioned exceptions, The Phantom of the Opera seems as fresh as when it first began, and if the show’s creative forces continue to care for the work as much as they have up to this point, it should be around for years to come.