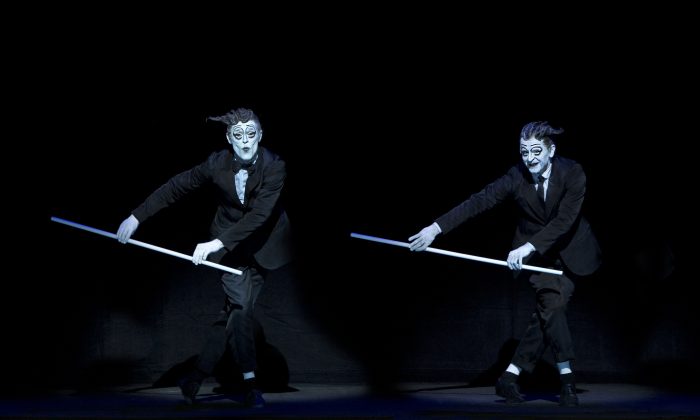 NEW YORK—An old woman who dies, a clock with no hands, a struggling writer, a young lady, a desolate terrain, the pangs of hunger. Shake, mix, change, repeat. These are the offerings in the surrealistic The Old Woman, based on the novella by Daniil Kharms and adapted by Darryl Pinckney.

Echoing elements of Beckett and Ionesco, where linear time and logic does not always apply, the play also reminds one of a smattering of The Twilight Zone. It offers an involving excursion through one person’s mind as seen through the two different sides of his psyche.

The work is strongly directed by Robert Wilson and wonderfully performed by Mikhail Baryshnikov and Willem Dafoe.

Wearing white clown makeup and sharply dressed in suits, Baryshnikov and Dafoe often repeated key words and phrases as the scenes shifted from one slightly askew landscape to the next.

The two also served as narrators of a sort, introducing each scene and what happens in it, though how and why events happened, such as the old woman dying, were open to question.

Exactly where she dies, however, was not. She expired in the writer’s apartment. He put her into a suitcase and took her to a train station. At this point, the suitcase disappeared.

There’s also the poem about hunger, which opens the performance. It explains how one can at first ignore it before eventually becoming weak, suffer loss of reason, and finally, in succeeding stages, become calm, resigned, and terrified as to its power. Though one must wonder whether the play is suggesting a mental hunger from lack of intellectual stimulation, a physical hunger, or a combination of both.

The set designs by director Wilson added to the surrealistic elements of the story. These included a bed folded at an odd angle, doors that led to nowhere, a cage, and a trapeze. He also put the actors through their paces with a sure hand. Baryshnikov and Dafoe used techniques such as mime, vaudeville, and dance to impart the tale.

It was fascinating to watch the two performers play off one another, sometimes leaping about with great fluidity, sometimes stiff jointed and almost mechanical, and often with a rather matter-of-fact attitude as to what was going on.

It was as if they knew the secret of the story and what it all meant, but other than giving clues and exploring the setting Kharms and Pinckney had laid forth, they left it to the audience to connect the dots.

Despite the deliberate repetitiveness of various scenes and dialogue, each sequence was included for a specific purpose, and so there was no feeling of the work repeating something just for the sake of doing so.

When seeing Baryshnikov and Dafoe onstage together, one could also see just how they represented different aspects of the same personality. Dafoe took on the darker side, his laugh deeper and more menacing of the two, and his actions seemed more aggressive and deliberate than those of Baryshnikov.

Baryshnikov’s character spoke at a higher pitch and was more apt to scream. He also took on the character of the old woman several times in the tale, and when he did, he became more of a participant in the story rather than one actually in control of it.

A bit of research before seeing the play was helpful. The program notes, offered by Pinckney, provided key details about events that shaped Kharms’s life. He was born in Russia and eventually became a part of that country’s avant-garde movement, continuing to do so even when that style of writing was condemned and criminalized by the Soviet regime.

He was eventually arrested and died in prison, quite possibility of starvation, in what was then called Leningrad while that city was under blockade in 1942.

When seen through this prism, the work takes on an added dimension of creative frustration, determination, and desperation. The press notes also say that the journey takes place through a “writer’s corkscrewed mind,” leaving one to speculate that the writer in question is Kharms himself.

Also effective were the lighting design by A.J. Weissbard and lighting concept by Wilson, with different shades of brightness ranging from subdued to almost glaring.

Costumes by Jacques Reynaud were quite good, and all looked just a bit off-center, the effect quite in keeping with the tone of the story. Music by Hal Willner also worked well.

An involving intellectual exercise and a brilliant piece of theatrical expression, The Old Woman is both fascinating to watch and wonderful to experience.