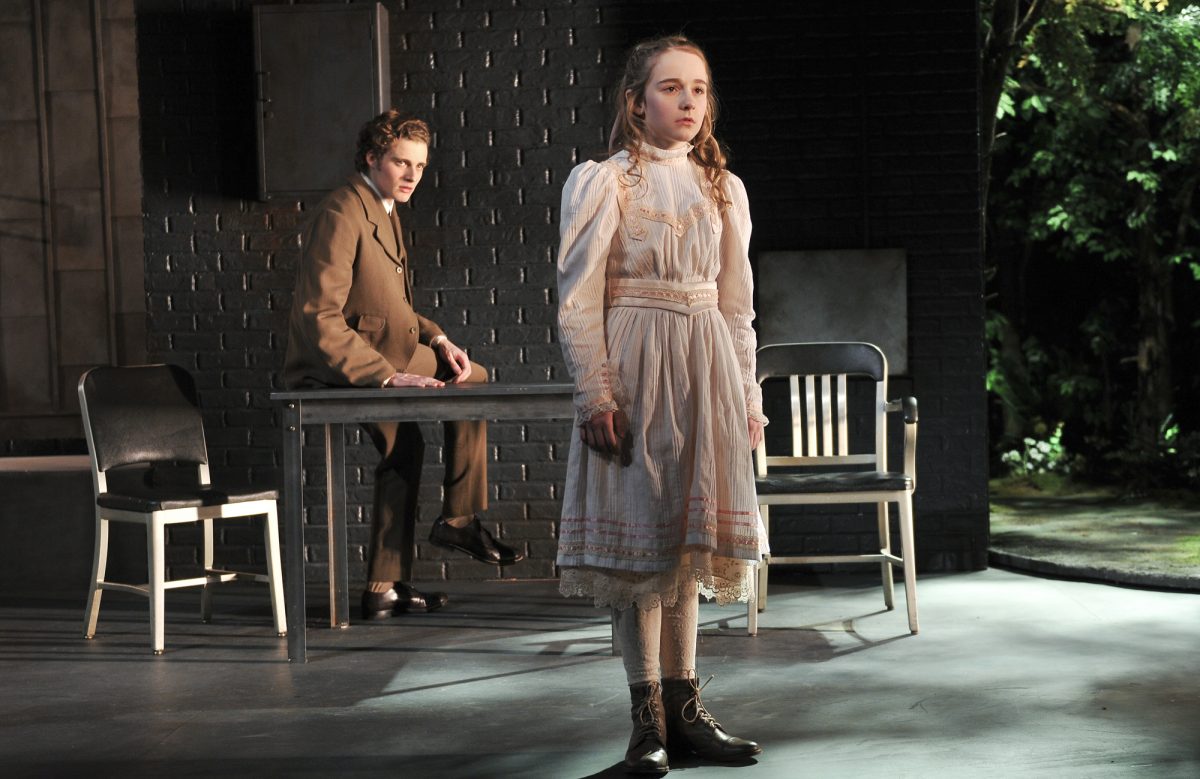 Where fantasies become too real
BY Judd Hollander TIMEFebruary 24, 2015 PRINT

NEW YORK—What exactly constitutes a victimless crime and what happens when people are denied a safe outlet for their otherwise perverted desires? These are some of the questions Jennifer Haley poses in “The Nether,” now being presented by MCC Theater.

Sometime in the future the Internet is no longer the wide open place it once was. Now called the “Nether,” it has become a total virtual reality interface. Eighty percent of the world’s population works in computer constructed office realms; children go to school in educational realms, and so on for just about every facet of life.

The interface process consists of more than simply typing at a terminal and staring at a computer screen. Rather, it’s a system which allows the user to literally enter a specific realm and become an active participant in what happens there. This practice becoming so popular that interaction in the world of the flesh and blood has shrunk dramatically in response.

Due to its continual growth, a special police unit has been created with the authority to enforce the law in the Nether, while also monitoring the various realms for illegal activity.

One possible criminal endeavor involves a Mr. Sims (Frank Wood), who has created what he calls called “the Hideaway”—a perfect online realm for himself and an exclusive clientele. This realm involves relationships with young girls, such as Iris (Sophia Anne Caruso), someone whom Sims considers to be his favorite daughter. Iris, it should be noted, is a computer creation, though embodied by a specific person once they enter the Hideaway.

Looking to shut down this operation is police detective Morris (Merritt Wever), but Sims, who has filed all the proper paperwork to get his realm up and running in the first place, has no intention of allowing that to happen. Yet the success of Sims’s enterprise depends on the keeping of secrets; and when enough of them are revealed, it will cause both Sims’s and Morris’s situations to unravel, perhaps beyond repair.

The central questions of “The Nether” are ones of legality and of right and wrong. If everyone involved in Sims’s scenarios knows exactly what they’re getting into, with the entire process not being completely real, just who is being hurt? The answer is that it depends on the people involved.

One person involved is Doyle (Peter Friedman), an elderly professor with a wife and grown daughter, who so enjoys his time in Sims’s realm that he wants to give up his humanity and simply become a creature of the Nether. It’s a wish that’s anathema to both Morris as well as to Mr. Woodnut (Ben Rosenfield), who is a new arrival to Sims’s world and enjoys himself perhaps too much once there.

Also important here is the complexity of the characters: Sims in particular. He’s a pedophile to be sure, but one intelligent enough to understand his predilection. The reason he created his own world is so that he and others like him could have an outlet for their needs instead of attacking someone in reality.

Sims is also smart enough to have instituted a series of safeguards—ones designed to prevent his realm from becoming too real—as well as stopping anyone from revealing personal information about themselves.

Wood does a great job in the role, showing the character to be sitting on a mountain of dangerous feelings while trying to keep them in check the only way he knows how. He’s also an unlikely spokesperson for the rights of the individual verses the rights of society, managing to get his points across quite effectively while offering an ominous warning of what might happen were this outlet denied him.

Sometime in the future the Internet is no longer the wide open place it once was.
Friedman is excellent as Doyle, a man so disillusioned by life he no longer wants to leave the virtual world he frequents. His habit of wearing his emotions on his sleeve puts him in stark contrast to Sims’s effort of always maintaining control of his own feelings.

Wever is fine as Detective Morris. A woman on mission to clean up the Nether, she runs the risk of becoming too caught up in her own agenda to be able to do her job.

Caruso does well as Iris, projecting the right amount of innocence and youthful maturity in a character that’s more an amalgamation of others than anything real.

Rosenfield does well as Woodnut, someone with his own secret that needs to be protected.

Laura Jellinek’s set design come off well, especially the scenes of the garden in the Hideaway. Ben Stanton’s lighting is fine, going from a soft effect in the Hideaway to a harsher look in the police interrogation room.

Involving throughout, “The Nether” presents a number of questions about the future of humanity and the promises and dangers that future poses. The show also offering tantalizing glimpses of other possibilities to explore should Ms. Haley chose to someday visit the Nether again.