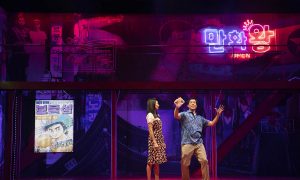 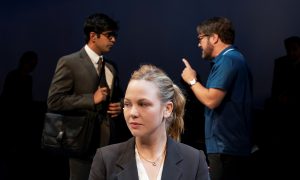 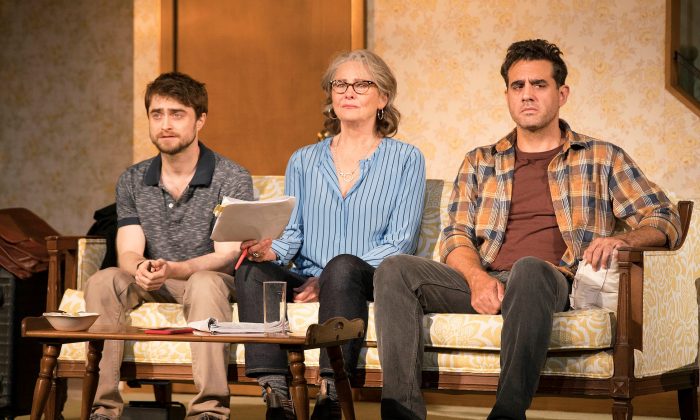 Theater Review: ‘The Lifespan of a Fact’

NEW YORK—“Never let the facts get in the way of a good story” is a quote usually attributed to Mark Twain, but it fits perfectly in the Broadway show “The Lifespan of a Fact.”

Emily (Cherry Jones), the editor-in-chief of a high-end magazine, is delighted with their upcoming issue. John (Bobby Cannavale), one of her writers, has handed in a nonfiction piece worthy of a Pulitzer Prize. It’s about a teenager who killed himself by jumping from the observation deck of a Las Vegas hotel and casino.

The story goes on to explore who this person was and, through his demise, shows how suicides have become interwoven into the fabric of our society.

All that remains to be done before the article can go to print is a final fact check. This assignment is given to Jim (Daniel Radcliffe), a young intern, eager to prove himself. Emily wants Jim to confirm every detail in the work and to get it done quickly.

Jim, however, turns out to be more exacting in his work than expected. Through his zealous examination, he uncovers discrepancies that threaten to upend the essence of what John was trying to convey. Jim goes so far as to analyze traffic patterns, examine the lunar calendar, and check out John’s home in Las Vegas firsthand, all in the name of accuracy. This is done to the increasing consternation of John and growing horror from Emily.

Authors Jeremy Kareken, David Murrell, and Gordon Farrell have crafted a fascinating tale that asks the audience whether facts should take a backseat to artistic vision or vice versa. Each of the three characters has his or her own answer to this particular question, along with ideas of how to resolve the dispute.

While none of the three set out to do anything unethical in pursuit of his or her goals, each eventually crosses that line.

For John, it’s the overall message of his story that’s important. He sees the facts as sometimes weighing down the piece; they lack the emotional impact he wants to convey, and so he alters them to fit his narrative.

Jim, on the other hand, goes overboard in his defense of the facts, so much so that his judgments begin to stray into editorial territory: Some aspects of John’s story can be open to interpretation.

As for Emily, who must make the final decision about whether or not to publish the piece, she also has her position at the magazine to consider. While it’s one thing for errors to slip through unnoticed, when Jim shows her all the discrepancies he has found, her new knowledge destroys any claim of plausible deniability she might make and perhaps could have previously relied on.

Emily also serves as a sort of reality check on the practice of fact-checking in general. We are in a high-speed age of digital technology, where carefulness is often sacrificed for speed. She notes how, due to the magazine’s “streamlined and actionable editorial process,” it no longer has a dedicated fact-checking department. Jim gets the job only because he responded to Emily’s request for someone to check over the story.

What makes the production both intellectually stimulating and immensely entertaining is its seamless melding of comedy and drama. The script is peppered with humorous situations and caustic one-liners, all delivered with perfect timing for maximum effect. Leigh Silverman’s razor-sharp direction helps to turn what could be a monotonous diatribe into an excellent piece of theater.

Cannavale is excellent as John. A rather self-absorbed sort, he’s out of step with the way the world operates when it comes to social media. He also makes a strong case for what he has done by showing how the emotional aspects of a situation linger with the reader long after factual points are forgotten.

Radcliffe, who does a great job with an American accent as Jim, comes off as sort of a nerd on a mission. He follows his own path to the truth via reams of meticulous research, and speeches that often cause the audience to roar with laughter. In the end, though, even Jim admits just how beautiful John’s story is.

Jones does very well as Emily. Her attempts at impartiality offer a strong counterbalance to John and Jim’s opposing viewpoints. She is also the one character who changes the most during the play. She goes from someone determined to publish a groundbreaking story to wondering if authorizing its publication is really the right thing to do.

Both sobering and timely, “The Lifespan of a Fact” shows how the question of truth can also be one of perception.